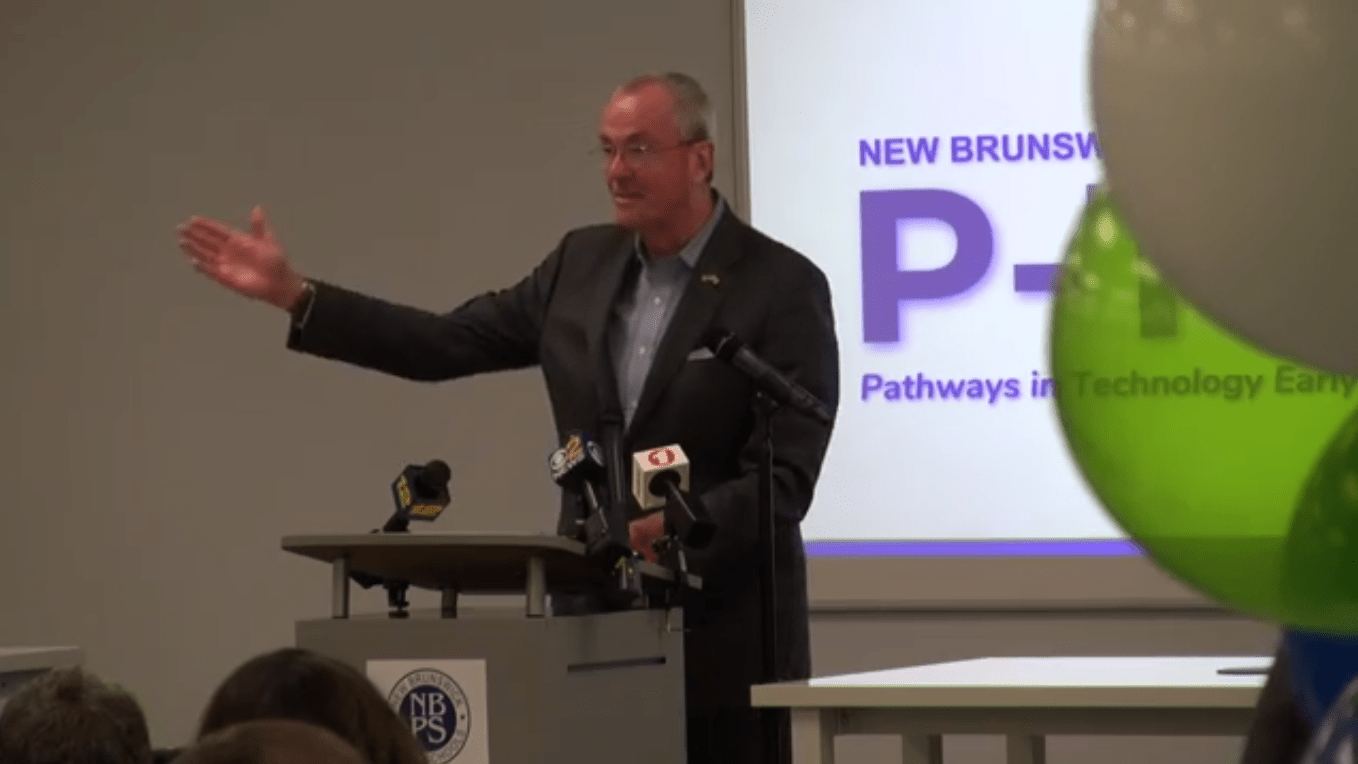 NEW BRUNSWICK, NJ—At a ribbon-cutting ceremony for a new school, Governor Phil Murphy made sure to praise both the current and former Mayor of the Hub City.

Murphy, a staunch supporter of Mayor Jim Cahill, was introducing the eight-term Mayor when he felt the need to express his support for Cahill’s predecessor, a legendary politician who did time in federal prison on a felony conviction.

The comment came just minutes before Murphy declined to address a personnel change in the important law enforcement role of Middlesex County Prosecutor, a recently-vacated position to which Murphy has not yet nominated anyone.

“Some folks can’t resist and say, ‘Yea, yea, yea, you’re just livin’ off the work of the last guy,” Murphy told the crowd gathered at 40 Van Dyke Avenue, a converted warehouse building that often serves as a public school for New Brunswick children.

“It is impossible, as I introduce the Mayor of New Brunswick, for anyone to assert that anything happening this week, last week, last year, five years ago, ten years ago, fifteen years ago, that he was living off the success of his predecessor, who was also a great Mayor,” said Murphy, an apparent reference to political boss John Lynch, Jr.

Lynch, who NJ Spotlight declared was the fifth-most corrupt New Jersey politician of all-time, served as Mayor of New Brunswick from 1979 until he handed the position off to his cousin James Cahill in 1991.

Cahill has been the Mayor ever since and he still meets with Lynch to talk politics.

Like his father before him, Lynch served simultaneously as Mayor of New Brunswick and State Senator.

But his corruption caught up to him in 2006, when a federal investigation ensnared him and his business partner. In an epic plea deal that effectively protected all of his other allies, Lynch admitted to mail fraud and tax evasion.

Lynch was released from prison in 2009 and, though he lives in Mercer County now, he still maintains many of his political relationships and alliances, making him an important player in county politics.

Cahill and Lynch were seen lunching with the Middlesex County Democratic Party Chairman Kevin McCabe at Steakhouse 85 on May 1, 2017.

And then in March of 2019, Lynch was seen meeting with Cahill, just days before the Middlesex County Democratic Organization selected one of Cahill’s own staffers as the party’s nominee for a seat on the Board of Chosen Freeholders, and ejected reporters from their event.

Murphy’s public praise for the political boss should not come as much of a surprise: He didn’t hesitate to drop Lynch’s name when he was seeking the party’s support in 2016.

As we reported, while he was campaigning for the Democratic nomination on November 30, 2016, Murphy spoke to a group at Rutgers University and expressed his support for the controversial figure.

During the talk, Murphy framed his own campaign as “the outsiders running against the failed special interest politics of the state. “

He explicitly told the crowd that he hoped they would consider him to be “not part of the machine.”

But 30 minutes later, Murphy was praising the infamous political boss whose name was widely known in the 1980’s and 90’s.

“By the way if you look at the renaissance of this community over the last 30-odd years, under only two Mayors, John Lynch and Jim Cahill,” Murphy began. “Working with Rutgers, working with the State, working with corporate citizens like Johnson & Johnson, right? Working with the local hospitals.”

“This is a great test case. It’s a great success story in this state. We need more of it,” said Murphy. Almost a year later, he was elected the state’s 56th Governor.

When Lynch left the New Brunswick Mayor role behind, many observers believed he was on track to become Governor. But that future never came to pass for reasons that included a mafia scandal where Lynch’s wife’s brother killed another mobster.

“[Lynch] was even considered a likely candidate for governor as recently as the late 1980’s, but those prospects dimmed when he married a woman whose brother, Louis Auricchio, was associated with the Genovese crime family and who later was convicted of a mob murder,” reported the New York Times on New Years Day 2006.

Lynch’s brother-in-law, Louis Auricchio, was released from state prison in 2010, after a 1994 guilty plea led to a lengthy federal sentence and four more years in state prison.

He pleaded guilty to aggravated manslaughter and racketeering, and admitted to fatally shooting John “Johnny D” DiGillio, whose body was found floating in the Hacksensack River on May 26, 1988.