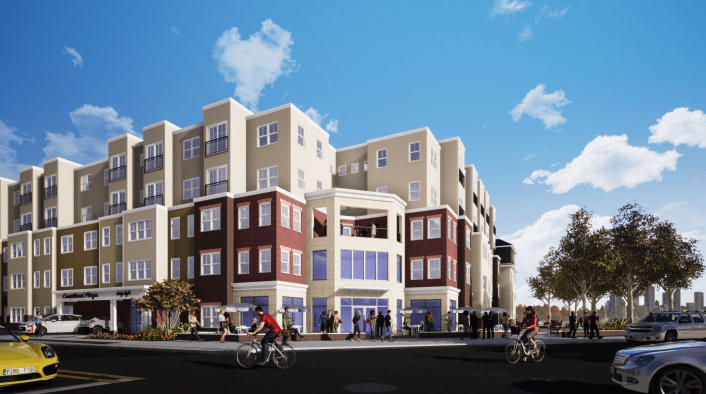 By: Charlie Kratovil
In: Environment & Climate

NEW BRUNSWICK, NJ—The city’s Zoning Board unanimously voted to approve plans for a new five-story building that would take over public property for a private purpose, all on a site that requires significant environmental remediation.

In the process, the city’s Acting Planning Director claimed that the Environmental Commission had been consulted, a claim that members of the commission dispute.

City officials also struggled to provide an explanation for why a required environmental statement about the development had been withheld from this newspaper prior to the hearing, and promised to release it swiftly–a promise they went on to break.

Recon Services, a company that has built two other buildings in the Sixth Ward, brought the county government’s top lawyer with them to the hearing and within less than two hours, they had an approved resolution giving them the go ahead to build a 94-unit apartment complex with a cafe and a 99-space underground parking garage.

An expert witness called by the company to testify during the board’s hearing admitted that the land in question is contaminated with gasoline and chlorinated solvents.

But members of the public, including this reporter, were misled about the application’s “Environmental Impact Statement” (EIS), a crucial document that city officials still have not provided despite promises to release it last week.

Under the leadership of Chairman John Cox, a former New Brunswick Parking Authority (NBPA) official and current supporter of President Donald Trump, the Zoning Board declined to postpone their vote on the project in light of the city’s failure to disclose the EIS to the public.

Trump, a notorious developer, has himself been a longtime opponent of environmental and zoning regulations.

After the meeting, planning officials speculated that the environmental report might not have been provided to this reporter because maybe it was never digitized by the Planning Department staff in the first place. Nevertheless, the department’s top man pledged to send a copy to this news outlet by week’s end.

“I can’t promise I’ll send it tomorrow, but I will by the end of the week,” Acting Planning Director Danny Dominguez told this reporter following the July 8 hearing, proceedings that yielded the first public indication that such a document even existed.

But as of Wednesday, July 17, more than a week later, the EIS was still MIA.

Dominguez also made a dubious claim during the public hearing when questioned by city resident Elizabeth Ciccone.

Ciccone asked if the city’s Environmental Commission had been able to review the environmental statement. Dominguez implied they had been in the loop for months.

“All projects are relayed over to the Environmental Commission before they hit our Technical Advisory Commission, and if they have comments, they send them to me or relay to our Techincal Advisory,” said Dominguez.

“There were no comments received on this project as far as I can tell.”

But the only two members of the city’s Environmental Commission to show up for their scheduled meeting on July 16 each said that they had not received any of the plans, and indeed they have not been provided with the Courtland Street plans, or any plans that were destined for Zoning Board hearings.

While environmental impacts are always a consideration for developments of this size, this proposal has as especially egregious set of circumstances surrounding it.

The proposed project hinges on an unusual intersection, where Louis Street becomes Courtlandt Street and vice versa, all at the nexus of Central Avenue and a one-way block of Duke Street.

The Sixth Ward Service Center, an auto repair business that was once also a gas station, has sat at the corner for decades. The developer’s hired expert conceded this operation was the source of the chlorinated solvents and gasoline that have contaminated some 670 cubic yards of dirt on the project site, and the groundwater.

The City Clerk’s Office had previously provided New Brunswick Today with a link to a Google Drive folder containing all of the documents associated with the Recon Services application. Our request for the records was made using the website OPRAmachine.com, and all correspondence is available for public review online.

Included in the folder was a single-page .pdf file with a two-sentence request for a waiver of the EIS requirement:

“The Applicant is requesting a waiver from submitting an Environmental Impact Statement. As this project proposed the redevelopment of existing disturbed infill lots, an EIS would provide very little benefit.”

The author of this article explained to the board that the EIS itself had not been provided in response to our Open Public Records Act (OPRA) request for documents related to Recon’s application for zoning variances.

But Thomas F. Kelso, the politically-connected lawyer who who has thrice represented Recon Services before the New Brunswick Zoning Board, objected to the suggested adjournment of the hearing to give the public time to read the EIS before the public hearing was closed for good.

Kelso is paid $206,885 per year to serve as the county government’s top lawyer, or “County Counsel,” as of Janaury 1. A close associate of former State Senator and New Brunswick Mayor John Lynch, Jr., Kelso continues to wield massive power within the Democratic Party and real estate business, especially in his home city of New Brunswick.

Kelso was among the dozens of powerful players who submitted letters to the Judge that sentenced Lynch in a 2006 federal corruption case. Mayor James Cahill, Lynch’s cousin reportedly testified before a grand jury in the case .

The Mayor, who took over for Lynch in 1991, appoints all of the members of the Zoning Board, and most of the Planning Board.

In addition to his huge public salary, Kelso’s firm is also hired to do work for the county government every year, and he doles out Assistant County Counsel positions to political allies. He also represents all of New Brunswick’s biggest developers in an enormous conflict of interest.

Kelso continues to be the most frequent attorney to represent applicants before the city’s Planning and Zoning Boards and he has not lost a case before either body since March 2015, when a 4-4 tied vote shot down one of his client’s controversial plans.

The hearing on the application was initially scheduled for late May, but Kelso’s office failed to properly notify all of the property owners within 200 feet of the site, in violation of New Jersey’s Municipal Land Use Law.

After the error was caught, the hearing was re-scheduled for June 24. But only four members of the Zoning Board showed up for that meeting, which would have given Recon Services the option to postpone to the board’s July 22 meeting .

But the zoning board did even better for Kelso and his client, going out of their way to schedule a special meeting on July 8.

That night, all signs pointed towards a speedy approval for the project, up to and including the fact that the board’s attorney Aravind Aithal, who works at the law firm of State Senator Bob Smith—Lynch’s replacement.

Aithal had deviated from the board’s usual procedure of adopting a formal resolution at their next public meeting and prepared a “resolution of memorialization” for immediate approval of the requested variances following the hearing.

Aithal admitted he had not prepared a resolution to memorialize a denial of the variances, in just another sign that the fix was in.

The zoning approval can be challenged in Superior Court for up to 45 days after the resolution is printed in a newspaper. The author of this article is seeking counsel to assist in opposing the apparently rushed approval.

However, the applicant cannot significantly move forward with the proposal until it acquires an entire block of a city-owned street, a move that will require the approval of Cahill and the City Council. As of the hearing date, it was unclear what price the developer would be willing to pay the city for the land..

Below is a complete video of the July 8 hearing on the project: