SOUTH RIVER, NJ—State law enforcement has arrested the licensed operator of the South River Water Department and charge him with submitting false water samples that tested them for coliform bacteria.

The town’s top elected official said he was “surprised” by the news and that Baker had been suspended, though he was not sure whether or not Baker would be paid during the suspension.

Baker collected $134,096 in pay last year, and has been with the borough since April 2010, according to public records.

The state’s Department of Environmental Protection (DEP) “collected its own water samples last week from various public points in the water system to test for coliform bacteria” and all of the samples passed the test, according to the Attorney General’s Office. 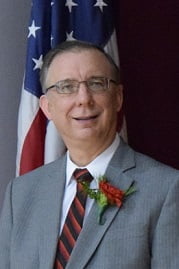 “We know that the water is safe now and we’re going to continue to test to make sure it’s safe,” Mayor John Krenzel told New Brunswick Today.  “The DEP has tested the water and we have taken steps to re-test.”

Mayor Krenzel, who is finishing up his second term and seeking re-election, said he will give Baker the “benefit of the doubt” and that he is “innocent until proven guilty.”

“There’s never been really any complaints about him and why somebody would do something this stupid, don’t know why,” said Krenzel.  “But at this point it was only alleged that this was what he was doing.”

In 2013, New Brunswick’s longtime licensed operator was ousted amid the uncovering scandal where he had covered up problems with the drinking water, but he did not face criminal charges until two years later.  He pleaded guilty to public corruption, a second-degree crime and spent years in prison before being released.

Krenzel confirmed that, unlike the New Brunswick situation, there was no allegation to his knowledge that bad test results were covered up, only that required testing had not been done despite Baker allegedly certifying that it had been.

Baker was charged with a violation of the Safe Drinking Water Act, a third-degree crime, after cops surveilled Baker failing to test all of the water sources he was supposed to on May 21 and June 11.

On the morning of June 12, Baker was arrested by law enforcement.  If indicted and convicted, Baker could face a sentence of three to five years in state prison and a criminal fine of up to $15,000.

“Today’s charges reflect our commitment to protecting New Jersey’s environment and the health of our residents through all the tools at our disposal, whether civil or criminal,” said Attorney General Gurbir S. Grewal.  “That means going after big companies who pollute our environment, filing charges against individuals who illegally dump waste and hazardous materials, and now bringing charges for the failure to properly test a town’s safe drinking water.”

By contrast, the New Brunswick scandal involving convicted water official Edward O’Rourke was kept under wraps until after the re-election of Governor Chris Christie, and criminal charges were slow-walked while Mayor James Cahill quietly privatized key aspects of the water system in the wake of the scandal.

That investigation also originated with state and federal environmental regulators, while this year’s case started in the South River Police Department.

The investigation was led by the Division of Criminal Justice Specialized Crimes Bureau, and also involved the Middlesex County Prosecutor’s Office.

Grewal also thanked the DEP for its “valuable assistance.”  The agency initated its own “regulatory action” against Baker and the South River Water Department.

The Borough’s website includes a single page for the “Water / Sewer Department” with links to consumer confidence reports from 2014, 2015, 2016.  A phone number listed is actually for the Department of Public Works.

The 2016 report includes notice of a minor violation of the same type that is alleged in the criminal complaint.

“For the monitoring period of November 1, 2016, to November 30, 2016, we received a Notice of Non-Compliance from NJDEP. We were required to take 15 coliform samples but only 14 were taken,” reads the legally-required notification.

“We have already taken the steps to ensure that adequate monitoring and reporting will be performed in the future so that this oversight will not be repeated.”