Members of the Rutgers American Association of University Professors and American Federation of Teachers (AAUP-AFT) made it clear that these contract agreements are a part of what union President Dr. Deepa Kumar has called a “social movement” in support of public education from West Virginia to Los Angeles.

The work of students and their pressure on the Barchi administration has been invaluable in the days leading up to the deal, said Dr. Kumar.

“They have shown us that when students, grads and faculty stand together, we can win and we can make history and that is what we did today,” Kumar said at a April 17 press conference outside the AAUP-AFT headquarters on Stone Street.

The AAUP-AFT represents over 4,800 faculty and staff who have been fighting for nearly 13 months for a variety of demands to increase pay for Rutgers tenure and non-tenure track (NTT) faculty, graduate students and Part-Time Lecturers (PTL).

The PTL’s are represented by the Part-Time Lecturer Faculty Chapter (PTLFC) of AAUP-AFT, which is continuing to negotiate a contract of their own, with support from their fellow union members.

Members will also receive a $3,642 retroactive payment for the 2018-19 school year, where the faculty worked without a contract.

The new teaching faculty contract includes more than what Kumar calls “bread and butter issues,” but also addresses gender, race and class.  For example, under the new contract, all faculty can demand a “pay equity correction,” enforced through binding arbitration, which the union says will ensure equal pay for men and women faculty of all races and ethnicities.

According to the Institute for Women’s Policy Research, women of all major racial and ethnic groups earn less than men of the same group.

Under the new agreement, pay for faculty who work at the campuses in Camden and Newark will be commensurate with their faculty in New Brunswick. 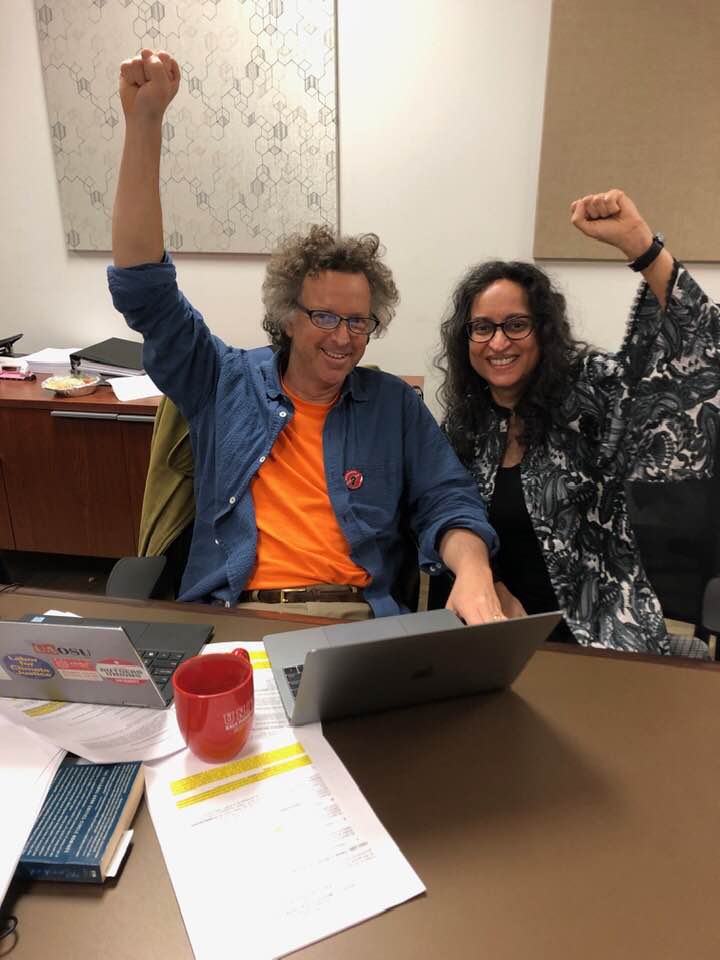 “We looked at that situation and said this is not right.  We are one state of New Jersey, we are one faculty,” said Hughes.

The union had already achieved one of their demands before reaching the deal on April 16: additional funding for the school’s Diversity Hiring Initiative.   On April 3, Barchi announced his administration would spend an additional $20 million on the initiative,  which seeks to enhance faculty diversity to better reflect the diversity of the Rutgers student body, one of the most diverse student bodies in the United States.

Teaching assistants (TA’s) and graduate assistants (GA’s) can also expect annual salary increases over the course of four years. By the end of the contract, salaries for TA’s and GA’s will increase from $25,969 to $30,162.

The administration did not concede to a few demands, one of which was a $15 minimum wage for all university employees. The Rutgers administration walked out of the room when the union raised the issue and refused to negotiate on issues related to student finances, said Hughes.

A Rutgers spokesperson failed to reply to any requests for comment on the administration’s refusal to negotiate on issues related to students.

One key point in the new contract protects TA positions awarded to grad students, by preventing the administration from converting them to PTL positions, which earn less pay, according to the summary.

“Graduate students here at Rutgers come here because we want to be supported as scholars and teachers in training and now through this contract we have many strides to ensure grad students are supported financially and with the benefits they need to do their best work,” said Dr. Lauren Frazee, a TA and member of the bargaining team.

Over 3,000 PTL’s, also known as adjunct professors, teach nearly 30% of all undergraduate students.

The number of Rutgers PTL’s and Non-Tenure Track (NTT) faculty continues to rise as they are a cheaper alternative to “tenure track” faculty who receive higher salaries and benefits.

NNT faculty and PTL’s combined represent 70% of the faculty teaching students at Rutgers, said Sherry Wolf, a senior organizer with AAUP-AFT.  The length of NNT faculty contracts has been increased to up to seven years, said Wolf.

Hughes said the union won a lot in the recent negotiations, but their gains only scratch the surface of the  institution’s annual surplus.

“This institution has $40 to $50 million of surplus to play around [with], which they stick into unrestricted reserves,” said Hughes, citing the nearly $800 million the university holds in reserves.

The value of the contract agreement comes to an estimated $17 million per year, less than half of the most recent annual surplus.  Hughes urged the university to use the extra funds to reduce the cost of tuition.

With Hughes and Kumar at the helm, the union has broadened its demands to include many student issues, such as increasing the minimum wage and making tutioin more affordable.

The union generated a great deal of buzz on all social media platforms and rallied national solidarity around the union’s message of equity, security and dignity for all workers, including support from US Presidential hopefuls Bernie Sanders and Cory Booker.

“People understand the struggle for equity and they see it as a just fight, as a fair fight, we were able to amplify our message not because we are clever social media operators but because we had a message that resonated with the public,” said Kumar.

This message resonated with many students, including some who formed the Student Solidarity Committee, a group that has first-hand experience in organizing social media campaigns, supportive actions, and public education. 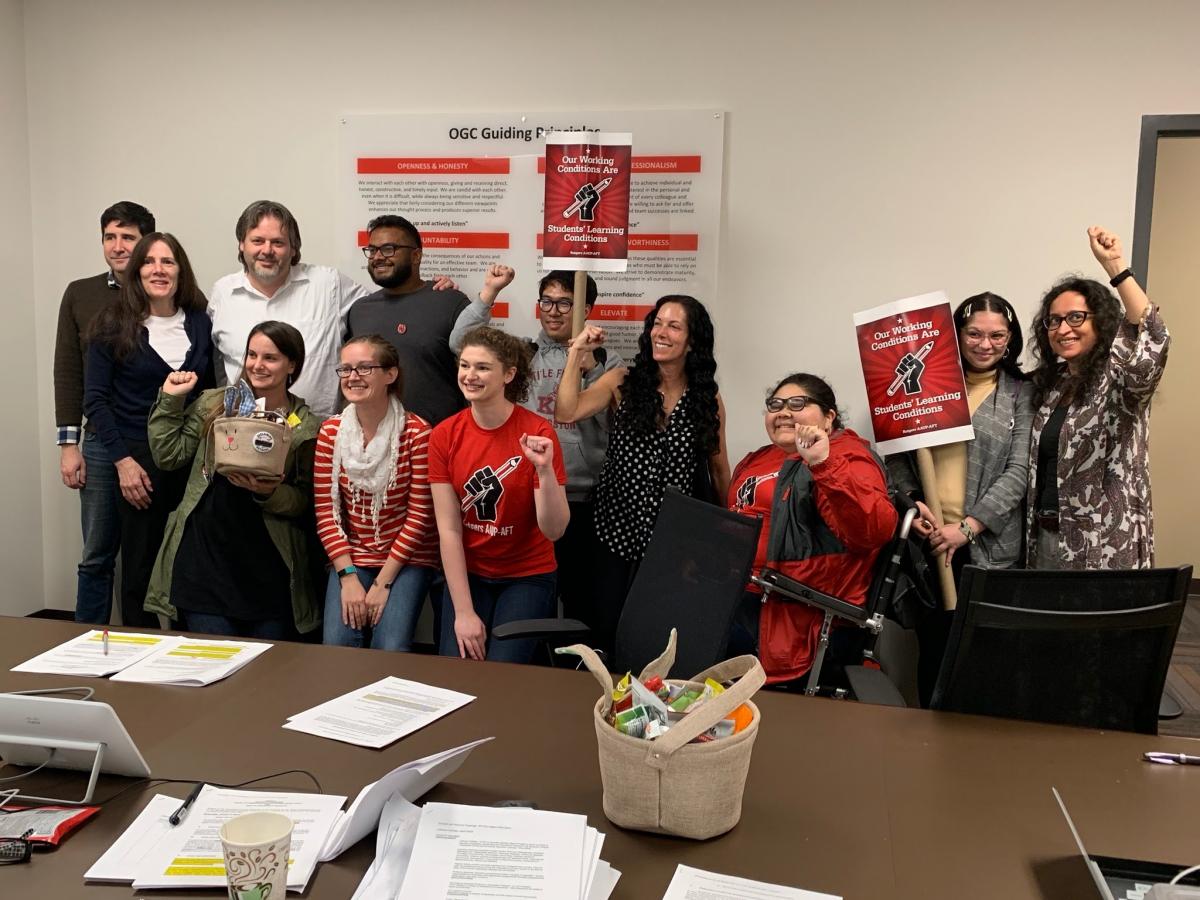 “Like a lot of millennials, I am very driven by injustices and feeling the need to try to correct that,” said Leah Hunt, a social media lead for the subcommittee as she helped prepare an action on April 15, where the committee stormed the negotiation boardroom in the Liberty Plaza on George Street to give Easter baskets filled with snacks and energy drinks for both the union and the Rutgers administration.

The students launched a “Break the Myth” campaign which sought to dispel concerns over wage and salary increases, “we can say: just because faculty is getting more pay, that doesn’t mean we are going to [have] higher tuition,” said Stephanie Marquez-Villafane, a student intern and subcommittee member.

The group saw an outpouring of support from other university student groups via social media including Brooklyn College and Kean University.

The AAUP-AFT represents the TA’s and GA’s and is one of several labor unions negotiating with the Rutgers administration, according to the American Federation of Labor and Congress of Industrial Organizations (AFL-CIO).

Over 10,000 Rutgers workers continue to bargain under other sister unions, including the PTLFC and the Union of Rutgers Administrators (URA)-AFT.

After joining the Big Ten Conference, a consortium of major research and athletic institutions, Rutgers funnelled tens of millions in student fee money to subsidize athletics, which has not yielded a return on its investment.

According to a report released by NorthJersey.com, the Rutgers athletics program will not receive a full share of revenue from the Big Ten until 2027.

Revenue taken from other parts of the university budget contributed $33 million to the Rutgers athletics programs, including $12 million in student fees, according to the report.

On April 13, Rutgers officials broke ground on a $65 million athletic facility in Piscataway.

The contract awaits ratification by the union’s members, but union leaders are confident they will support the deal.

“The important point is that the university is not a corporation.  It is not in the business of making money, it is in the business of serving the New Jersey public and publics beyond that which means that money should be spent where it should be spent, which is to actually give a living wage to all its people who work here at Rutgers,” said Kumar.