NEW BRUNSWICK, NJ—Police Director Anthony “Tony” Caputo is now set to sit on the board that runs the city’s powerful Parking Authority through 2023.

At Mayor James Cahill’s request, the City Council consented to the five-year appointment in his absence.

Caputo is perhaps the city’s most elusive public official, the only department head in Cahill’s cabinet that consistently does not attend the Council’s meetings.

A close ally of Cahill, Caputo did almost no public events last year, but he attended eight of the Parking Authority’s twelve public meetings, which are held high atop the city on the sixth floor of 106 Somerset Street.

“You know the drill,” was all Caputo said in response to questions about Cahill’s plan to create a new Deputy Chief position within Caputo’s department.  Miller referred our inquiries to City Hall, where the Mayor’s Office said they “don’t respond to political publications.”

Along with the board’s four other members, Caputo controls the massive New Brunswick Parking Authority (NBPA), the largest agency of its kind in New Jersey.

NBPA Board members don’t get paid, but they do get an access card that grants them unlimited free parking in any of the NBPA’s eight public garages.  A ninth garage is currently under construction on Bayard Street, thanks to $23 million in funds borrowed by the authority in 2017.

The NBPA currently rents out several floors of office space in the “Gateway” building where they are headquartered, along with other spaces in the highrise, which is the city’s tallest.  They also rent out the spaces used by the struggling Superfresh supermarket, and the fitness center located above it in the NBPA’s “Wellness Plaza.”

In an unusual arrangement, the NBPA recently began managing an entire block of storefronts owned by the New Brunswick Housing Authority on the ground floor of the “Easton Avenue Apartments,” a 12-story Rutgers dormitory. 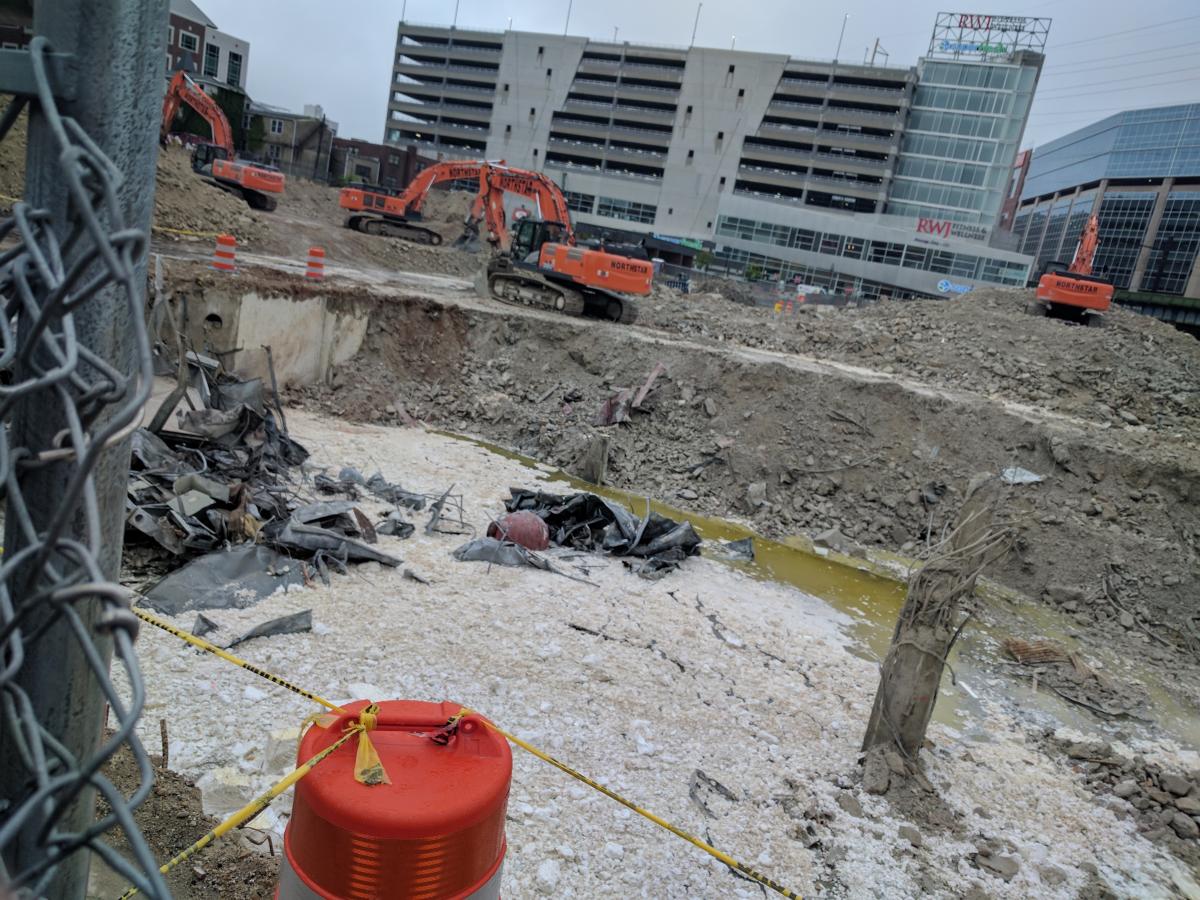 Located along Route 27 across from New Brunswick’s downtown train station, developers and politicians have long fantasized about building something grand in the space.

The site remains a fallow eyesore, with no physical signs of progress despite a billboard ten stories above that declares “INNOVATION UNDER CONSTRUCTION.”

Like most of the NBPA Board’s members, Caputo has gotten comfortable in his seat.  It’s also not Caputo’s first stint as the powerful NBPD Director, where he is paid $133,818.

Caputo’s wife Donna, a city employee since 1994, earns a $62,886 annual salary as the city’s Recycling Coordinator.

His sister, Tina Rose Caputo, was hired in October 2017 to a $60,000 salaried position as the Supervisor of Billing and Collecting for the city’s embattled Water Utility.