SAYREVILLE, NJ—Joseph Cryan, a longtime politician from Union County, is now earning $190,000 per year as the new Executive Director of the Middlesex County Utilities Authority (MCUA).

Cryan now splits his time between the elected position and the one running the county agency that operates the Middlesex County landfill in East Brunswick and a massive wastewater treatment plant.

“Like a lot of folks, I like to go to work, and I do consider the opportunity to be in the State Senate a privelege,” Cryan told New Brunswick Today in an exclusive interview.

“There’s two committees a month, and a voting session a month, and so that is the obligation,” Cryan said, downplaying the time commitments of the Senate position.  “I’m not in Trenton each day… I’m here [at the MCUA] on-site, here early and available to work.”

Cryan was appointed by the MCUA Board of Commissioners in March, and left his position as the Undersheriff of Union County on April 13 in order to start the MCUA job on April 16.  He made about $50,000 less in salary in the law enforcement position, according to a report on LocalSource.

He says he intends to stay in the State Senate if the voters of his district—which includes Elizabeth, Hillside, Roselle, and Union Township—will continue to elect him.

Cryan previously served as an Assemblyman representing the 20th legislative district and then ran for State Senate in 2017 after that district’s longtime Senator Ray Lesniak retired. 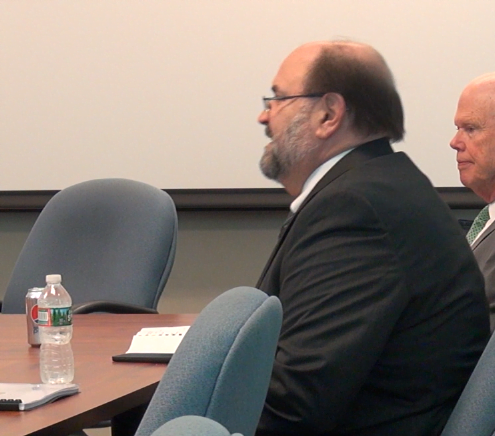 He took over for longtime MCUA boss Richard Fitamant, but Fitamant remains on the agency’s payroll, making an even bigger salary than Cryan.

“Richard Fitamant will continue working with the Middlesex County Utilities Authority on a full-time basis,” said Tony Cicatiello of C-N Communications, a public relations firm hired by the MCUA.

Serving in the new job title of “Transition Advisor/Special Projects,” Fitamant still collects a $229,570 salary, according to Cicatiello.

“He will oversee completion of several major projects that began during the last few years, including the rehabilitation of the Edison and Sayreville Pump Stations.”

Under Fitamant’s leadership, the agency settled a costly fraud lawsuit filed against them by a contractor.  As we reported, the suit lasted nearly a decade and cost the agency’s rate-payers over $12 million, including a $5 million settlement.