Patton made this announcement, along with other proposals, on April 19 at the Fair Housing 50th Anniversary Seminar in Toms River.

A landlord currently only needs to meet three out of five inspectable areas of a Real Estate Assessment Center (REAC) inspection to pass, according to Patton.

Patton wants to change the scoring system so that the common areas of buildings such as hallways would weigh higher on the inspection than landscaping or parking lots.

Patton used Garden Spires Apartments in Newark as an example of a HUD property that passes inspection despite terrible living conditions and an estimated $580,000 annual federal subsidy.

Patton was not familiar with the poor conditions of Robeson Village and Schwartz Homes, New Brunswick’s nearly 70-year-old public housing complex operated by the New Brunswick Housing Authority (NBHA), but she said she would look into them.

Under prior law, HUD enforcement action for failed Real Estate Assessment Center (REAC) inspections did not begin until after two consecutive failures. HUD would then give a 60-day period in which all repairs must be made.

Under Section 223 of the new bill, HUD enforcement action begins after the first failed inspection, and HUD now gives a specific timetable in which all repairs must be made.

The new timetable allows for the possibility of either shorter or longer correction periods.

HUD enforcement options on failed REAC inspection property include requiring immediate replacement of the management agent, imposition of civil monetary penalties and seeking judicial appointment of a receiver of the property who would both manage the property and correct non-compliance.

Receivership was an option rarely exercised in the past, and Patton did not speak on it.

Patton claims her proposed program will block HUD-subsidized landlords from selling their property if it is not up to code, even though Section 223 of the new appropriations bill allows this as a new enforcement action.

Section 3 is a job creation program and an obligation on entities that receive HUD funds to provide job training, employment and contracts for low-income residents in connection with projects and activities in their neighborhoods.

Patton said Section 3 began with good intentions, but the provision that the programs had “to apply to the best of their ability” caused recipients to take advantage of it.

In honor of President Lyndon B. Johnson’s signing of the Fair Housing Act, Patton said at the event she is devoted to upholding this law.

“As I stand here I have to say, I know how President Johnson must have felt,” Patton said.

Despite this statement, Patton’s July 5, 2017 appointment coincided with a dismissal on July 18, 2017 of a Fair Housing case in the same county where she lives, Westchester, New York.

The decision comes weeks after a new administrator for HUD’s New York and New Jersey office was named. Westchester resident Lynne Patton, a former event planner and vice president of the Eric Trump Foundation, was named administrator in late June — just two months after HUD’s last rejection of the county’s analysis of impediments, or AI.

The latest AI was “essentially the same” as the previous version, both put together by the firm VHB Engineering, according to Astorino’s staff. Catherine Borgia, the county legislature Democratic majority leader, said what had changed this time was Patton’s appointment.

“After years of wasting Westchester taxpayer money, and 10 attempts at submitting an acceptable analysis of impediments, it seems the 11th time is the charm for the County Executive,” Borgia said in a statement.

In a letter defending the previous analysis, VHB acknowledged there were “concentrations” of white, black and Hispanic populations in the county but concluded that zoning was not the cause. Astorino said he didn’t know what role, if any, the new leadership had in the decision but said the facts were on the county’s side “no matter who was the president, no matter who was in the staff at HUD.”

In the past, Patton has proclaimed allegiance to developers and private sector solutions to housing issues.

“It’s certainly no secret that [New York City Housing Authority] public housing properties sit on some of the most valuable real estate in New York City. How [developers] choose to leverage that is really up to them,” Patton told TheRealDeal.com.

“One of the points in my 10-point plan I hope to implement is to promote the sale of HUD’s single-family homes,” she said in the same interview.

The New York Times reported Patton plans to “measure compassion by the number of ‘able-bodied people’ federal officials could get off welfare and housing programs by encouraging self-sufficiency.”

In 2001, 246 public housing units were lost with the demolition of the Memorial Homes.  Fifty-eight families from the apartment received vouchers from the NBHA for private rental housing.

In 2016, 24 public units at the New Brunswick Apartments were converted into private units under Rental Assistance Demonstration.

Carson told TIME magazine, “For me, success is not how many people we get into public housing, but how many we get out.”

HUD could get more people off subsidies without bettering their living conditions by simply making them ineligible, similar to the way the Temporary Assistance for Needy Families program did.

Patton failed to mention at the event Carson’s intention to raise the amount that low-income families would pay in rent, which he proposed publicly one week later on April 25.

The proposal would triple rent for the poorest households

Nearly half of all renters are paying 30% of their income on rent, according to a 2017 study by Harvard’s Joint Center for Housing Studies.

In addition, renters over the last decade grew to 43 million households, an increase of 9 million since the 2008 recession.

And while construction was fairly equal between cheap, mid range and luxury rentals in the year 2001, luxury is now by far the largest.

New Brunswick is one example of a city that has not kept pace with affordable housing demand while continuing to spend millions of taxpayer dollars subsidizing luxurious downtown units.

Forty-five percent of households that receive a subsidized housing voucher in New Brunswick included children, and only 2% of those homes had two adults in the household, according to the 2016 Q4 Picture of Subsidized Households database.

People issued a voucher in the preceding 12 months waited an average of 59 months on the waiting list, according to the 2016 PSH database.

As previously reported in New Brunswick Today, in February 2016, NBHA Executive Director John Clarke said the Section 8 waiting list was about 3,000 families long.  Earlier this year, the NBHA has opened one of its public housing waiting lists for the first time in years.

Patton claimed that despite agreeing on most policies, she has urged her favorite person in D.C., Donald Trump, not to cut funds for HUD.

“What he’s supporting is the efficient and effective allocation of taxpayer dollars, something that has been long abused in government. It doesn’t mean [programs] are just going to go away,” Patton told TheRealDeal.com.

Carson wrote in The Hill that he wants to “Reimagine the way HUD works” while “eliminating improper payments and waste, fraud and abuse.”

Still, Patton and her number two recently made negative headlines over nepotism at HUD, and a controversial decision to purchase expensive furniture for Carson’s office.

According to American Oversight:

News reports over the past several weeks have raised serious questions about the role that Secretary Carson has allowed his family members [in violation of nepotism rules] to play at the department as well as the influence wielded by Patton, the former Trump family employee who now oversees HUD’s largest regional office.

Reporting by the Guardian and other outlets also suggested that Lynne Patton, who previously worked for the Trump organization and helped to plan Eric Trump’s wedding, was involved in the decision to demote and reassign a HUD employee who pushed back on Carson’s expensive furniture requests.

Separately, emails obtained by American Oversight last month via FOIA litigation revealed that Patton frequently emailed with Ben Carson Jr. – who is not a HUD employee – in the weeks before an official HUD tour of Baltimore that Carson Jr. was helping to organize. Those emails also showed the younger Carson using his position to connect his personal business associates with senior officials at HUD including Patton.

Patton was also involved with misuse of funds as Vice President of Eric Trump’s charity.

According to Politico, the New York Attorney General’s Office “is pursuing allegations that Eric Trump’s charity illegally funneled payments to the family’s for-profit business, at which he and Patton worked.

“Patton began working for Trump’s son Eric in 2009 as the vice president of his foundation and as his primary aide. She oversaw all aspects of his business, charity and personal obligations. That included his home and spousal responsibilities as well as coordinating events.”

Patton said at the event in Toms River that she plans to release a 10-point priority plan soon. 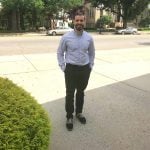