NEW BRUNSWICK, NJ—The city’s dysfunctional Housing Authority Board of Commissioners was forced to cancel yet another public meeting on April 25 as its membership dwindles.

The cancellation comes after yet another board member resigned his office, while another faces an uncertain future as he battles a criminal charge brought against him by this reporter.

As we’ve reported, the board has struggled to hold public meetings in recent years and several chronically-absent members have quit or been forced out of office.  The agency was also the subject of a scathing audit by the federal government last year.

Just hours after New Brunswick Today published an article about the lengthy delay in a new state-appointed representative to the NBHA assuming office, the board member submitted a resignation letter to Governor Phil Murphy.

Ramon Alayon, a local real estate agent who had been appointed to the NBHA Board in the final days of the Chris Christie administration, initially wrote to State Senator Sam Thompson to resign the position in a letter dated March 30. Alayon cited his role with the Knights of Columbus and that organization’s efforts to raise funds for hurricane victims in Puerto Rico as reasons for quitting the NBHA post before being sworn into office.

“The State Knights of Columbus organization has asked me to lead a program which will entail a commitment of many extra evening meetings,” wrote Alayon.

The letter was forwarded to an aide for Governor Murphy at 5:50pm on March 31, just over 17 hours after New Brunswick Today published an article titled “Christie Appointee to Dysfunctional NBHA Board Still Not Installed.”

Just days after Alayon quit the board, the term of another board member expired and he was not immediately not re-appointed to the position by seven-term Mayor James Cahill.

Housing authorities are unique in that they are funded by the federal government, but their board members are appointed by a combination of local and state entities.

Here in the Hub City, the Mayor appoints one board member, while the City Council appoints five.  The remaining member is chosen by the Commissioner of the state’s Department of Community Affairs, an appointment that is ultimately approved by the state’s Governor.

Mayor Cahill has chosen to make Yirgu Wolde his nominee to the NBHA Board for more than two decades, but according to city officials, Cahill failed to re-appoint Wolde after his latest five-year term expired on April 3. 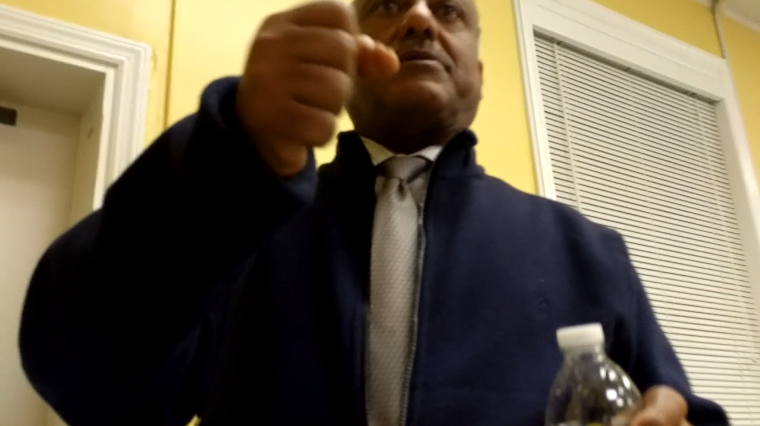 Wolde, who works as a division director at the NJ Housing and Mortgate Finance Agency, is currently fighting a criminal charge of harassment for threatening this reporter with physical violence, perhaps one reason the Mayor has been hesitant to give Wolde another term in power.

For his part, though, Cahill downplayed the severity of Wolde’s threat, which was captured on video after the NBHA’s November 15 public meeting.

“The meeting is over so I’ll knock you out,” Wolde said in the viral video, after getting in this reporter’s face and making a fist.

Cahill’s office did not respond to multiple requests to see if he would take action after the threat, so New Brunswick Today tracked down the Mayor at a public event, where he finally addressed the video.

“While the conduct certainly wasn’t exemplary, it really isn’t actionable. I don’t see what action needs to be taken at this point,” said Cahill, who has been in office since 1991. 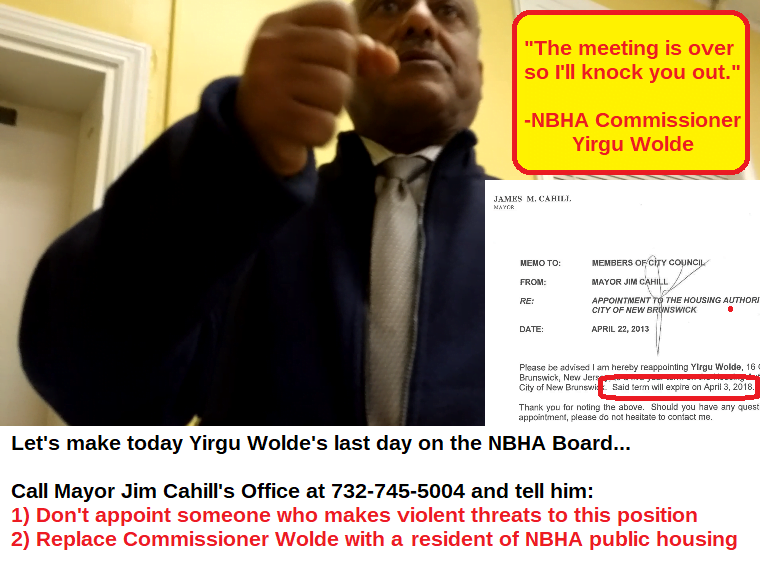 With Wolde’s appointment about to expire, this reporter asked supporters to call the Mayor’s Office and urge Cahill not to re-appoint Wolde, instead requesting that a resident of the public housing complex run by the NBHA be appointed to the position.

The NBHA board does not include any public housing residents, and Edna Otero, the sole recipient of a housing subsidy on the board, has not attended a NBHA meeting since July 2017.

But, at least for now, it appears that Wolde will remain in office because the state law governing housing authorities dictates that, “Each commissioner shall hold office for the term of his appointment and until his successor shall have been appointed and qualified.”

While state officials at the Department of Community Affairs did not say how or where people interested in serving on the NBHA board should apply for the position that Alayon resigned, the city government’s website includes a form that residents can use to apply for Wolde’s seat on the board.

Editor’s Note: This newspaper is currently suing the NBHA in Superior Court over its failure to comply with the state’s Open Public Records Act.