NEW BRUNSWICK, NJ—Students and parents are expected to speak out at the upcoming Board of Education meeting after recent incidents have led to increased safety concerns.

On the morning of January 19, images purportedly depicting a gun inside New Brunswick High School (NBHS) circulated among the student body, leading to an intense lockdown.

The lockdown began at exactly 9:20 am, disrupting classes for more than two hours, before giving way to a “shelter in place” at approximately 11:55 am, according to a student.

Police and school officials confirmed no weapon was found inside the school despite the photos which were posted pictures on the social media platform Snapchat. 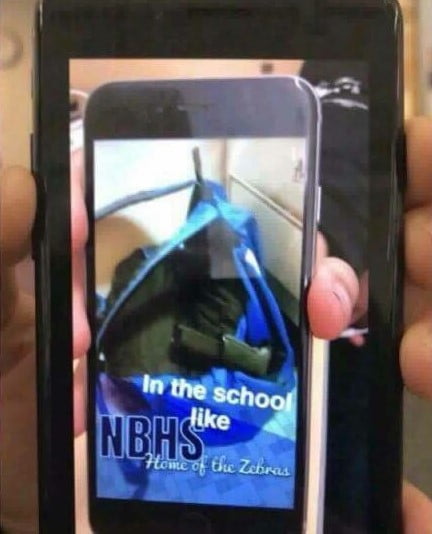 The school’s Snapchat “filter,” which can only be used within the vicinity of the school, was displayed on the image of what appeared to be the handle of a firearm inside a bag, along with the caption “in the school like.”

According to student sources, authorities investigating at the scene removed a student from a classroom. during the lockdown.

One student in the same class told New Brunswick Today that police entered the classroom and removed a freshman student believed to be the suspect.

Officials then returned back to that same classroom and told students to get out and leave their belongings behind.

It wasn’t until 12:12pm that authorities disclosed the lockdown to the public via a Nixle alert.

“Today at approximately 9:20 am, the New Brunswick High School went into a lockdown situation in response to a possible threat of a weapon brought into the school,” read the alert.

“The New Brunswick Police Department conducted a thorough investigation and determined that no weapon was brought into the school or onto the school grounds. The High School was returned to normal operating procedures at approximately 11:35 am.”

Three days later, NBPD issued a press release stating that a 16-year-old student from New Brunswick was taken into custody and charged with Terroristic Threats and Creating A False Public Alarm.

According to numerous students, the suspect was plotting to shoot the Junior Assembly, but police did not comment on this allegation.

Some students shared their panic and fear on social media, while others made light of the incident, posting videos of them laughing and joking as they remained calm.

Many parents were upset that they were not notified of the active situation by authorities, and instead found out from their scared and worried children.

Many students, as well as parents, were not convinced by the police statements that no gun was brought into the school.  Some were concerned over the school’s security procedures, leading to renewed demands that the school ensure the safety of all students.

This reporter asked numerous students if they had physically seen the gun, but the response was consistently no.

Students said that security staff tends not to fully check backpacks of students or get involved with fight or verbal disorders that occur inside the school.

For example, less than three weeks after the lockdown incident, a fight involving multiple students was captured on video.  Though the school district downplayed the injuries, one parent later sent their child to the hospital.

In the weeks since these incidents, school security has become a top issue across the country after seventeen people were killed by a shooter in a Florida high school on February 14.

Since that tragedy, students at the school have called for national protests to address the issues of gun violence and school safety.

Here in New Brunswick, similar issues are expected to come up at the next Board Of Education meeting, set for Tuesday, February 20 at 7 pm inside the same school where the recent incidents occurred.

NBHS is located at 1000 Somerset Street and the meeting, which will be held in the building’s auditorium, is open to the public.

Editor’s Note: The author of this article created a Facebook event to encourage people to attend the February 20 Board of Education meeting.