NEW BRUNSWICK, NJ—A longtime member of the Board of Education gave a misleading report on the school district’s drinking water testing at a February 20 public meeting.

“For the City of New Brunswick Board of Education, we’re going to be [testing the drinking water] annually like we have been doing for the past ten years,” said Spencer.

However, according to their own public statements and responses to Open Public Records Act (OPRA) requests, the district has only tested its drinking water in four of the past thirteen years.

Questioned by this reporter during the public comment section of the meeting, Facilities Director Frank LoDolce confirmed that, to his knowledge, water testing had not been done every year for the past ten years as Spencer had claimed.

“I think maybe Mr. Spencer was talking about how, going back to 2003, we’ve started water testing.  I’m not aware of every year for the last ten years,” said LoDolce.

Prior to 2016, the last time district-wide water tests were conducted was 2005, when the district worked with the US Environmental Protection Agency (EPA) on a water testing program. In 2009, follow-up testing was conducted, but only at the district’s oldest school: Lincoln Elementary.

“In 2005… we had an air quality issue,” explained Board of Education Business Administrator Richard Jannarone.  “Lincoln School was the most egregious school at that time.”

“We found elevated levels of lead in the water. We then decided that we should test all the schools,” said Jannarone.

The results, produced by Phillipsburg-based RK Occupational & Environmental Analysis, included a number of recommendations to the Board of Education, including: “You should consider re-sampling every 3 to 5 five years to ensure proper drinking water is maintained.”

However, from 2009 until 2016, no water testing was done in any New Brunswick schools, including Lincoln.

“You see a problem.  You solve it.  And you’re done,” said Jannarone, defending the decision not to test again during the seven-year period and adding that he felt the district had “taken care of this issue many, many years before the rest of the nation is just learning of it.”

“I believe this Board of Education has been more proactive than you give us credit for,” said Jannarone.

Testing for lead in the drinking water has been required in all school districts statewide since July 2016, when the New Jersey Board of Education adopted regulations mandating such testing in the wake of widespread water-based lead poisoning in Flint, Michigan. As we reported, then-Governor Chris Christie announced the impending new requirement just one day before a public meeting where the New Brunswick Board of Education refused to disclose test results that would later show nearly 8% of school faucets tested exceeded the legal limit for lead contamination.

The district administration was subsequently shamed into releasing the full results of the testing, after initially releasing only a vague statement about it.

Not only were the shocking results—and the board’s subsequent secrecy—the topic of an article in this newspaper, but the issue also garnered television coverage, another reason why it’s peculiar that Spencer’s recollection is so far from reality.

Spencer has been on the board of education since 1994, back when it’s members were appointed by the Mayor.  He is currently running for re-election to another three-year term.

Back in May 2016, under fire for their hesitancy to release the test results, another board member told New Brunswick Today that news reports about problems with drinking water in other places had sparked discussions about resurrecting the water testing program earlier that year.

But those discussions also came around the same time that NBToday’s Daniel Muñoz filed an OPRA request asking the district for copies of their water testing results. 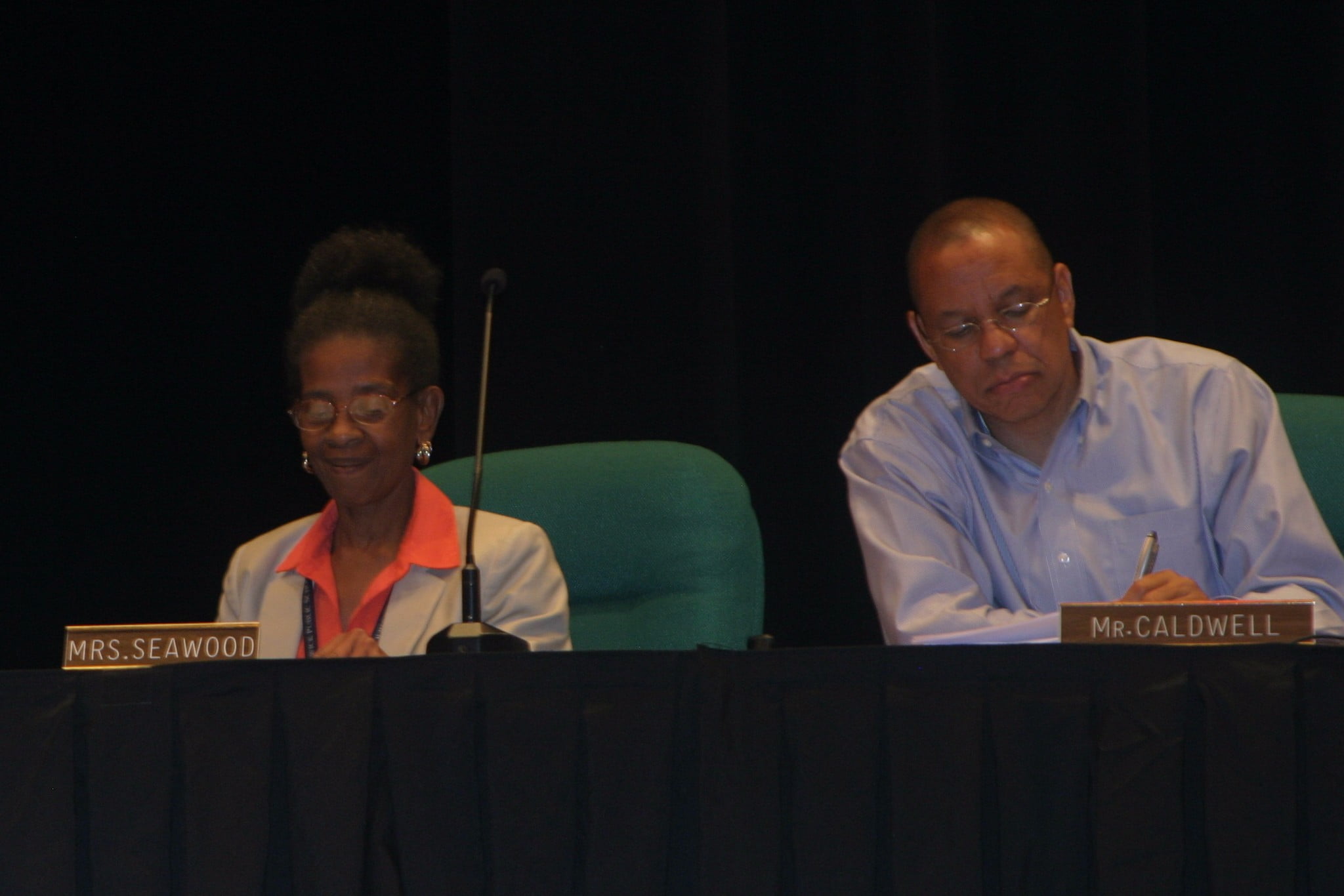 Emra Seawood, then-President of the Board of Education, said the district had “taken a proactive approach… as soon as the board had knowledge of other areas of the country affected by this water crisis.”

“As soon as we were aware of problems in other areas of the country, we began talking about it.  We didn’t just up and decide to do any testing in April [2016],” said Seawood.

“And it wasn’t a formal decree. It was more a discussion that we needed to test our water.”

To their credit, the district has continued with annual testing for water-based lead in each of their buildings, despite the state’s rules requiring testing only once every six years.

In 2016, initial tests found 14 out of 181 faucets had excessive lead levels, while results from 2017 showed four out of 260 faucets that were tested exceeded the legal limit.

The faucet at NBMS, located in a bathroom in the hallway by room 57, was spewing water containing 186 parts per billion—or more than 12 times the legal limit—of lead.

Spencer confirmed that the initial 2018 round of testing is currently underway and said he will be reporting the results, and that they will also be posted on the district’s website.

Editor’s Note: The author of this article is volunteering with the campaign of Jad Kaado and Nancy Love, two candidates running in the April 17 election where Spencer is seeking re-election.