Gonzalez recently joined the Journalism and Media Studies faculty at the School of Communication and Information at Rutgers University’s New Brunswick campus.

Before coming to teach at Rutgers in January, Gonzalez worked as a journalist for the New York Daily News. He has also co-hosted the TV and radio show “Democracy Now!” for 20 years.

His book focuses on New York City, but also examines other communities where this progressive movement developed, and its implications for these cities.

It provides a detailed look at NYC Mayor Bill de Blasio’s effects on city politics, as well as the progressive left’s movement throughout many urban areas across the country.

But it wasn’t until Bill de Blasio was elected mayor of New York City in 2013 that Gonzalez decided to write a book focusing on urban America, chronicling the new wave of young progressives.

“What I noticed was that not only was de Blasio probably the most progressive mayor the city’s had in perhaps its history— certainly since the 1930’s— but also that there were a lot of other progressives getting elected in other cities,” Gonzalez told New Brunswick Today. 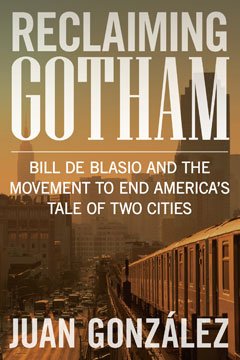 His book further examines this “politics of resistance to the 1%” that he argues has long dominated city politics.

Gonzalez also noted that this dynamic exists in every city, including New Brunswick.

Local government politics, from “privatizing government services, what to do with the park system, how to tax people, how to deal with downtown development…” are generally the same from city to city, he argues.

Though New York, Chicago, and San Francisco are working on a bigger scale than communities like New Brunswick, Edison, or Metuchen, local politics operate on the same dynamic.

Does local government policy serve the needs of the real estate developers and bankers who aim to maximize the value of every piece of land in the city, or does it instead focus on serving the residents of the city, particularly the working and middle-class citizens that make up the majority of that population?

Is it about making as much money as possible or using resources to best serve the needs of the people? Reclaiming Gotham explores that tension in its discussion of “the tale of two cities.”

After a year and a half of researching and writing “Reclaiming Gotham,” Gonzalez has noted significant change in the cities featured in the book— particularly New York City, which he focuses on the most.

From free public pre-kindergarden, paid sick time for over 500,000 low-wage workers, freezes on rent for three consecutive years, a new middle school afterschool program, and the establishment of a new municipal ID that provides free one-year admission to cultural establishments like museums and zoos, New York City has demonstrated incredible growth in its services to its residents.

“These are all reforms that have occurred in the last three or four years since Mayor de Blasio came in,” Gonzalez explains. “And there are other things, too, going on in other cities that also have progressive mayors.”

He listed Boston and Pittsburgh as other examples. These changes are also happening in New Jersey, Gonzalez said.

Despite recent actions at the national and state level, at the city level, there is still much hope. He adds, “and it’s largely because young people are running for office in city councils or as mayors. They’re winning.”