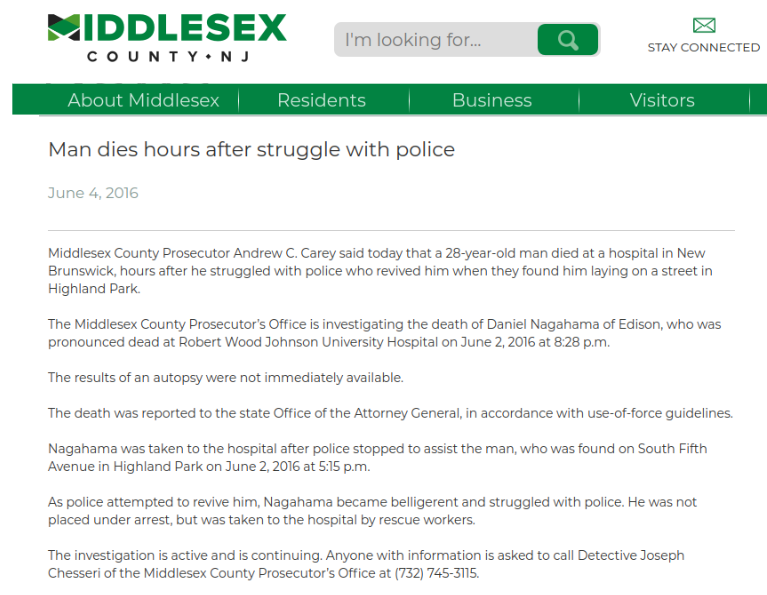 County Prosecutor Carey Under Fire For Statement Disproven by Video

HIGHLAND PARK, NJ—Residents are demanding an independent investigation after police videos raised new contradictions with the story that County Prosecutor Andrew Carey has propagated about the death of Daniel Nagahama.

Nagahama, a 28-year-old Edison resident, passed away at a New Brunswick hospital just three hours after officers with the Highland Park Police Department (HPPD) deployed pepper spray against him during a rough arrest on June 2, 2016.

But police videos and other official records that prosecutors tried to keep secret tell a very different story than the one that Carey's office publicized last summer.

Instead of coming clean about the use of the chemical weapon, the Middlesex County Prosecutor's Office (MCPO) spun together a phony narrative where officers "revived" the same man that they had actually handcuffed, pepper-sprayed, and prepared to charge with disorderly conduct.

The county website still includes the misleading statement, which claimed that police both "revived" and "attempted to revive" Nagahama.

The official tale also incorrectly claimed Nagahama "was not placed under arrest," but Prosecutor Carey has since doubled down on that statement, insisting Nagahama was handcuffed "for his safety" and that he was never "formally arrested."

Videos of the apparent arrest have sparked community outrage in the small town, and calls for a new investigation into the tragic incident.

"We must demand an independent investigation — conducted by an entity outside Middlesex County — of the police and prosecutor’s actions involved in the incident," said Elizabeth Weill-Greenberg, a local resident who helped organize a "vigil for police reform" on December 22.

The footage released two days prior by this newspaper, combined with official documents now entering the public sphere, cast further doubt on the official story that the MCPO disseminated last summer.

The videos depict four different Highland Park officers getting rough with Nagahama within eight minutes of finding the 370-pound man sprawled out in the middle of an intersection. 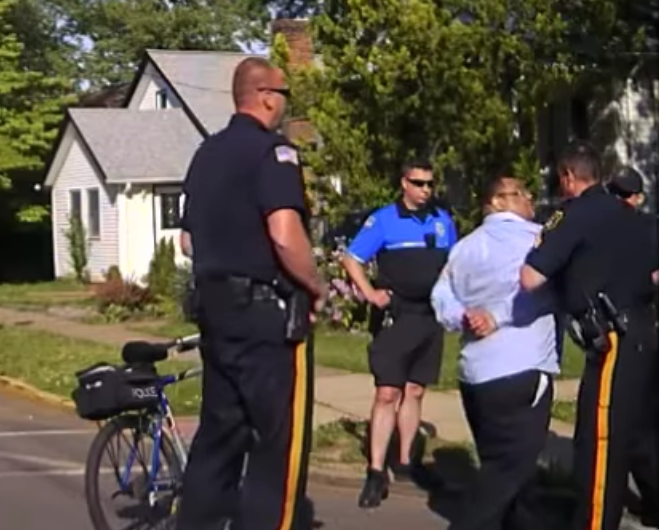 Nagahama, who was heavily intoxicated at the time, pointed his index finger and yelled at HPPD Sgt. Jason Culver shortly before Culver escalated the altercation, grabbing Nagahama's right arm, yanking him by that arm, and—with help from another officer—pushing him against the hood of a parked cop car.

"You're hurting me," Nagahama said, before being presented with a choice of sitting on the curb or going to jail.

Nagahama declined the trip to jail, but then tried to break free, and a violent struggle ensued.

Within a minute, Nagahama is down on the pavement—and out of view of the cameras—and that's when Officer Brian O'Mara uses his department-issued chemical spray on Nagahama, who reportedly suffered from asthma.

The official reports of the four officers paint a picture of Nagahama interfering with police efforts to talk with witnesses at the scene, and claim that Nagahama was uncooperative when police wanted him to undergo an evaluation by a member of the first aid squad. 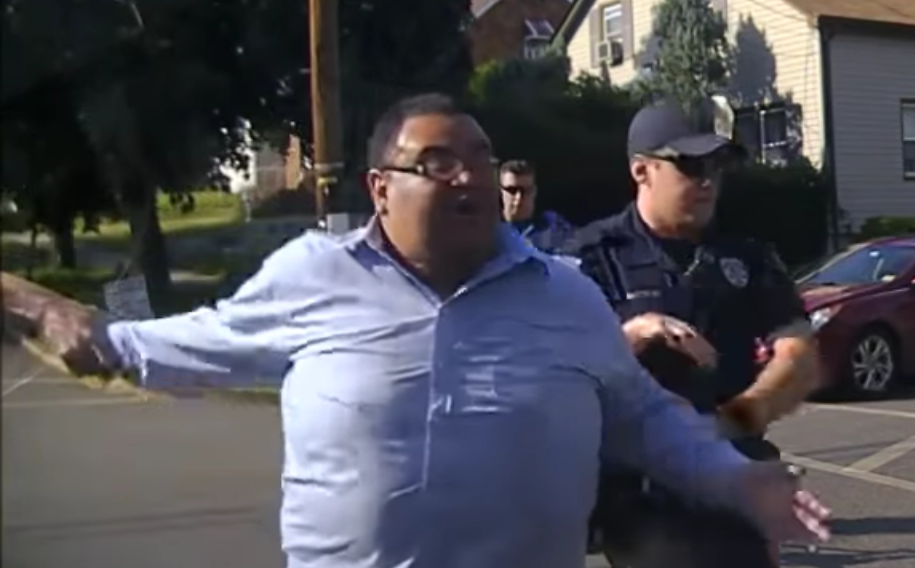 The arrest videos are consistent with those narratives, but they also exposed some bogus claims that came out of the prosecutor's office.

"As police attempted to revive him, Nagahama became belligerent and struggled with police," reads the original MCPO statement, a work of fiction that has been widely quoted in news coverage of the incident ever since.

It's not only the videos, but also newly-released reports authored by the responding officers that appear to undercut the prosecutor's narrative that officers "revived" Nagahama.

"I was quite struck by the original story from the Middlesex County Prosecutor’s Office, that [Nagahama] was being revived when he became belligerent, and as a result there was an altercation. But that wasn't actually true, you could see the video, that was not the case at all,” activist Ellen Whitt told a local reporter at the recent vigil. 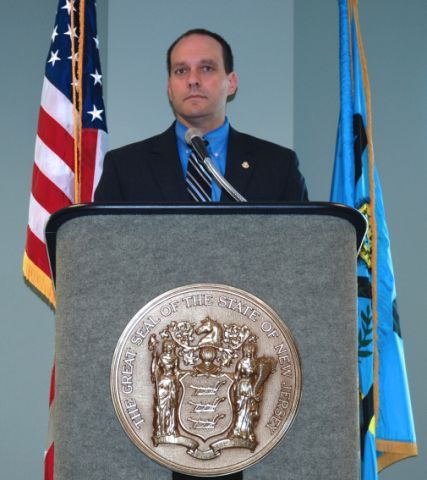 Prosecutor Carey, who was appointed by Governor Chris Christie in 2013, still has not publically acknowledged O'Mara's use of "OC spray," more commonly known as "mace" or "pepper spray" against Nagahama.

For his part, O'Mara owned up to spraying Nagahama in his own supplemental report, as well as a use of force report, two documents that Carey's office then tried to keep out of the public eye.

"A physical struggle ensued at which time I sprayed the subject with OC spray."

But the weapon's use was completely omitted from the official MCPO statement on Nagahama's death, which was released two days after the tragic incident and while an autopsy report was still being prepared by Assistant Medical Examiner Alex Zhang. 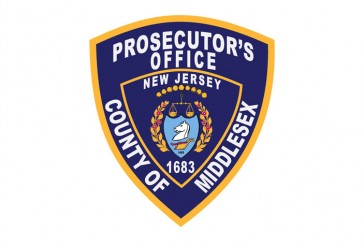 After issuing the misleading statement, the MCPO spent months fighting to keep all of the reports from the incident a secret, including the use of force reports that indicate O'Mara used a "chemical/natural agent," as well as the fact that all of the officers believed they had arrested Nagahama.

Detailed supplemental reports filed by the officers mostly describe Nagahama's disorderly conduct, their fruitless attempts to question him, and their use of force to subdue him.

But there's absolutely nothing in the documents about their alleged efforts to revive the man who they found sprawled out in the middle of the intersection closest to the borough police station.

Similarly, the videos also depict no such efforts to revive Nagahama.  Instead, they show officers questioning a combative man who is standing upright and communicating with them.

By the end of the ordeal, Nagahama is entirely off-camera, screaming in pain for several minutes, first as he falls from the hood of the car to the pavement, and again after O'Mara unleashes the OC spray on him.  He is eventually loaded onto a stretcher and into an ambulance bound for Robert Wood Johnson University Hospital. 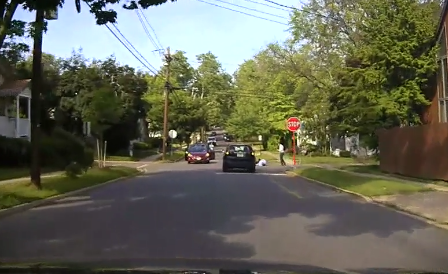 It's still unclear if Nagahama was the victim of a motor vehicle crash, or if something else happened that led to him lying in the middle of the street.

Police and first aid staff had been dispatched to the scene under the impression the call was a "pedestrian struck" or a "hit-and-run."

Nagahama appeared to be conscious and able to communicate with police as they arrived, and each of the first two officers on scene reported that Nagahama stood up against their wishes.

"Nagahama refused to answer my questions and attempted to stand up against my against my requests for him to stay on the ground due to unknown injuries thay may be present," wrote Christopher DeCosta, the first officer on the scene, in a June 8, 2016 report.

"One of the witnesses stated that he beleived that Nagahama was struck by a vehicle and possibly injured," wrote DeCosta, noting that Nagahama told him a different story while laying on his back in the middle of the intersection.

"I asked Nagahama if he was struck by a vehicle to which he responded he 'got into a fight with his mother' and was pushed out of her vehicle," reads the report.

If the officers ever got to the bottom of it, it didn't make it into their reports, which each end with this statement: "For further details, refer to video taped statement provided to Middlesex County Prosecutor's Office on 6/3/16." 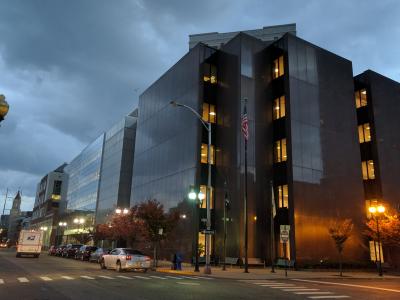 The MCPO's misleading official story held up for over a year, while prosecutors fought inside the Middlesex County Courthouse against a government transparency group who sued them for violating the state's Open Public Records Act (OPRA) by refusing to produce the reports from the case.

Libertarians for Transparent Government finally won their case against the MCPO on November 29, 2016.  But the use of force reports that contradicted the MCPO's official story would not enter the public sphere for at least another seven months, while both sides waited for another similar case to play out in a higher court.

Since July 2017, official records from the case have begun to slowly find their way onto the internet and into the hands of activists and reporters, causing the MCPO's official story to unravel.

The Borough of Highland Park was a defendant in the lawsuit, and local officials there did not want to fight against releasing the records.  However, Carey's office reportedly ordered them not to release the reports, citing his agency's "ongoing" investigation.

"As the MCPO is the lead law enforcement agency for Middlesex County, the Borough must follow this order, and accordingly cannot release any documents independently," Highland Park's lawyer wrote on September 28, 2016. 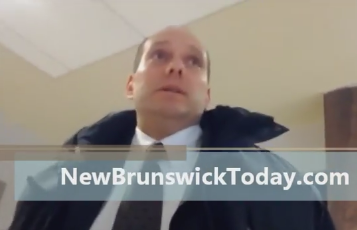 Carey tried to shift the blame to the person who sued the MCPO.

"[OPRA] is commonly abused by some individuals and their attorneys who file lawsuits with the primary goal of obtaining attorney's fees at the taxpayers' expense," Carey told NJ.com's Spencer Kent after Francis' decision was handed down.

Plaintiff John Paff called Carey's response "appalling," and when he finally received the use of force reports six months later, Paff was the first to point out that they included information "contrary" to the MCPO's press release.

The collection of reports we are releasing today includes an incident summary, evidence reports, an investigation report completed by Sgt. Culver, and supplemental investigatory reports from the other three officers, as well as an autopsy report that contains a toxicology report. 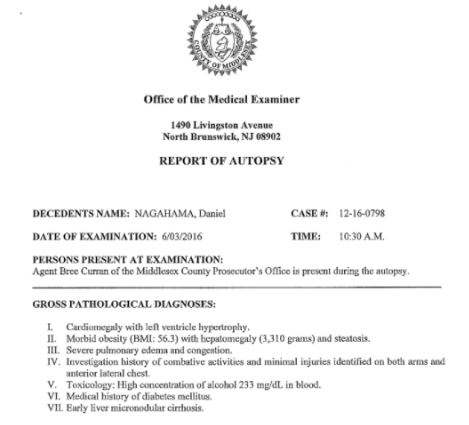 The autopsy found the manner of death to be "natural" and the cause of death to be "morbid obesity with cardiomegaly and left ventricle hypertrophy," essentially an enlarged heart.

The toxicology report notes a blood alcohol level of .233 for Nagahama, as well as the presence of caffeine and the antidepressant Paxil in his bloodstream.

It's unclear from the autopsy whether or not the staff in the medical examiner's office was told that officers had used pepper spray against Nagahama, or if they were left in the dark like the rest of the public.

According to the report, MCPO Agent Bree Curran was present during the autopsy. 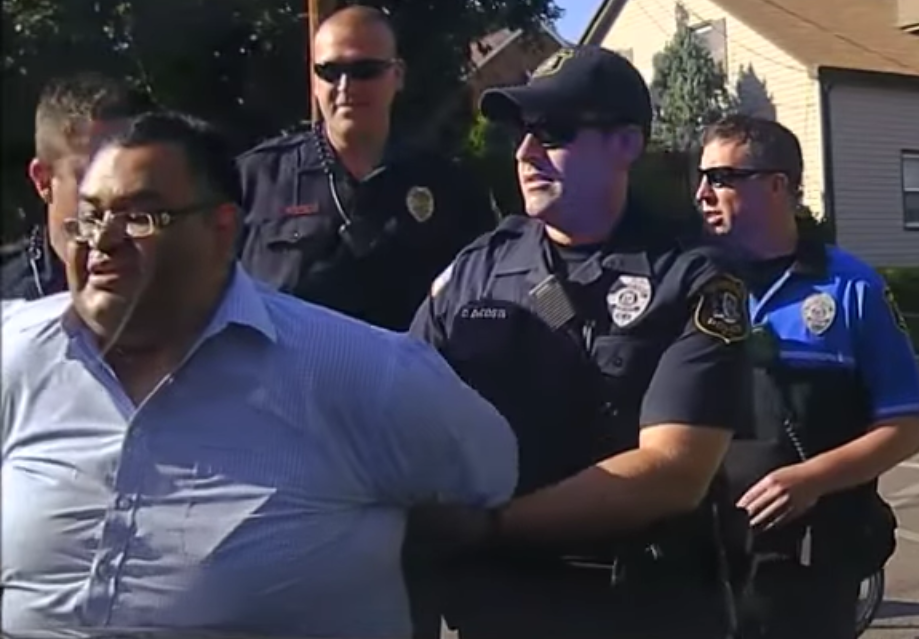 Videos of the rough arrest have prompted many residents to question the HPPD's policies and training regiment, as well as the integrity of MCPO's investigation into the incident.

"As a community, we must work to address the systemic failures of policing that may have taught the officers to respond to Nagahama as they did. We must uncover and listen to the stories of those who have been mistreated or harassed by police in Highland Park," wrote Weill-Greenberg in a letter published by the Home News Tribune.

"We must work together with law enforcement, many of whom work tirelessly every day in traumatizing and stressful situations to help and protect our most vulnerable residents, to create a system that respects the dignity of all of us."

New Brunswick Today published an article on December 5, highlighting the MCPO's since-disproven claim that Nagahama "was not placed under arrest" and sparking renewed public interest in the 18-month-old case.

After the videos of the arrest were released by NBToday on December 20, Carey found himself under pressure to answer questions about that misleading statement.

Carey followed up with a statement to reporters who questioned the claim that Nagahama was never arrested.

"While Mr. Nagahama was indeed restrained, handcuffed and transported from the scene to the hospital, he was not placed under formal arrest. The [use of force reports] which indicate an arrest, were prepared in anticipation of later charging Mr. Nagahama with a petty disorderly persons offense​," Carey was quoted.

However, one of those reports Carey that refers to, the one written by Officer DeCosta, was not signed until October 14, 2016, more than four months after the incident in question.

Carey's office did not respond to a request from New Brunswick Today to explain why the report was not filed until the late date.