SAYREVILLE, NJ–A police officer lost his job after admitting he covered up his patrol car’s dashboard camera while running a “quick, personal errand.”

Pizzillo was admitted into the pre-trial intervention (PTI) program by Judge Michael Toto on September 25.

The Middlesex County Prosecutor’s Office had recommended one to five years of probation, without any jail time.

Many facts related to the April 8 incident remain unclear, despite the release of the obscured video footage.

An April 25 complaint accused him of “putting his hand and/or a piece of cloth over the camera in an effort to conceal his whereabouts and/or activity,” according to the complaint.

But it appeared Pizzillo received special treatment from investigating authorities including the Middlesex County Prosecutor’s Office, which kept the case quiet for more than six weeks. 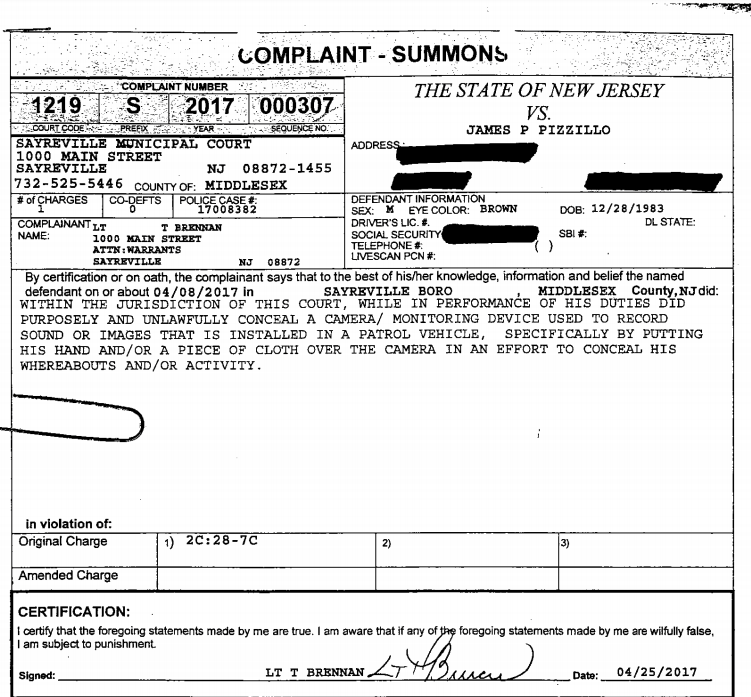 “All charges that are indictable 4th degree and above are [supposed] to be on a warrant complaint. Then the person would be arrested and processed,” one inside source told New Brunswick Today.  “They did a summons complaint which is unusual.”

“Something that serious would be on a warrant complaint. So that right there says something.”

Indeed, court records show no indication that Pizzillo was ever arrested in connection with the case, despite media reports to the contrary.

Pizzillo was a third-generation police officer, whose brother Thomas Pizzillo remains a member of the Sayreville police force.

His father is a retired chief of the South Amboy Police Department, and his grandfather was a Port Authority Lieutenant.

It’s not the only scandal making waves at the Sayreville Police Department this year.

On May 1, two members of the Sayreville Council voted to expedite the police hiring process despite widespread knowledge that their own relatives were in line to take the spots.

The elected officials, Victoria Kilpatrick and Mary Novak, are now the subject of an ethics complaint filed by John Paff, the legendary good government activist.

“I believe that the Council members had at least a ‘indirect… personal’ relationship with their blood relatives which ‘might reasonably be expected to impair [their] objectivity or independence of judgment,'” wrote Paff.  “This is the criteria set forth in the Local Government Ethics Law.”

In Pizzillo’s case, the video provided to New Brunswick Today in response to an Open Public Records Act request shows him briefly covering his dash cam around 11:45 pm after crossing the Route 9 bridge connecting South Amboy and Woodbridge.

The cover-up experiment ends shortly thereafter, but once Pizzillo approaches his destination, the camera is once again obscured, this time for a total of two minutes. 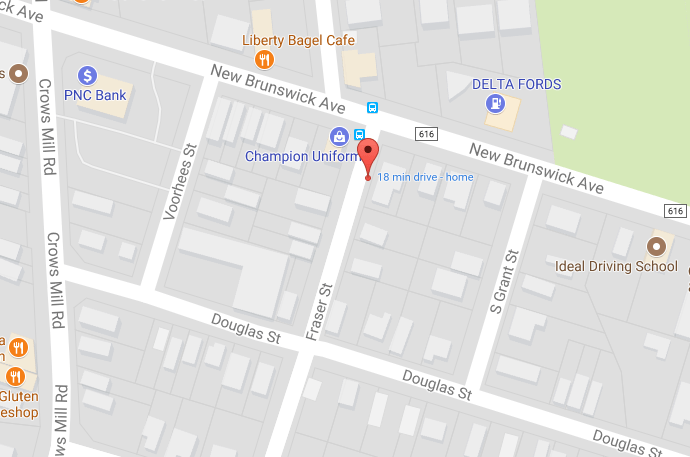 During that time, Pizzillo briefly parked his vehicle near the corner of Fraser Street and New Brunswick Avenue, according to GPS data included with the video footage.

When asked what the “personal errand” was, his defense attorney evaded the question and instead praised Pizzillo.

“James Pizzillo is an American hero,” Michael Weiss said in an email.

Pizzillo had served in the military for 4 years and was awarded the Purple Heart for his tour in Iraq in 2007.

Pizzillo served in the Marines from 2004 to 2008. He was the lead gunner in convoys and conducted over 300 combat patrols during his time in Iraq, said Weiss in an email.

Weiss detailed his many accomplishments in the email, but did not address the nature of his “personal errand”, which still remains a mystery.

In the hearing, Pizzillo agreed to give up any employment with law enforcement.

“That’s now and in the future, meaning it could be permanent,” said Judge Michael A. Toto. “Do you understand that?”

Pizzillo joined the police force in January 2015 and earned an annual salary of $53,950, according to public employee data.