NEW BRUNSWICK, NJ—Local officials voiced their collective support for the “Build A Thriving New Jersey” campaign at a breakfast hosted at the Unity Square Community Center on September 27.

The initiative calls for the state government to commit approximately $600 million for affordable housing programs and related endeavors.

Organized by the Housing and Community Development Network of NJ (HCDNNJ), an association of different groups advocating the creation of housing and economic opportunities for low and moderate income families, the 90-minute event brought together local government and community leaders.

At the Remsen Avenue community center, those in attendance discussed current affordable housing programs in New Jersey and the need for such programs to find a more prominent place on Trenton’s list of budgetary priorities.

Created in 1989, the HCDNNJ is a network consisting of more than 250 community development corporations, individuals, professional organizations, and New Jersey corporations dedicated to creating housing and economic opportunities for low and moderate income community residents.

Divided into nine regional advocacy groups across the state, they help support members in their effort to promote economic justice and empowerment through the means of targeted assistance, education, research, and public policy. 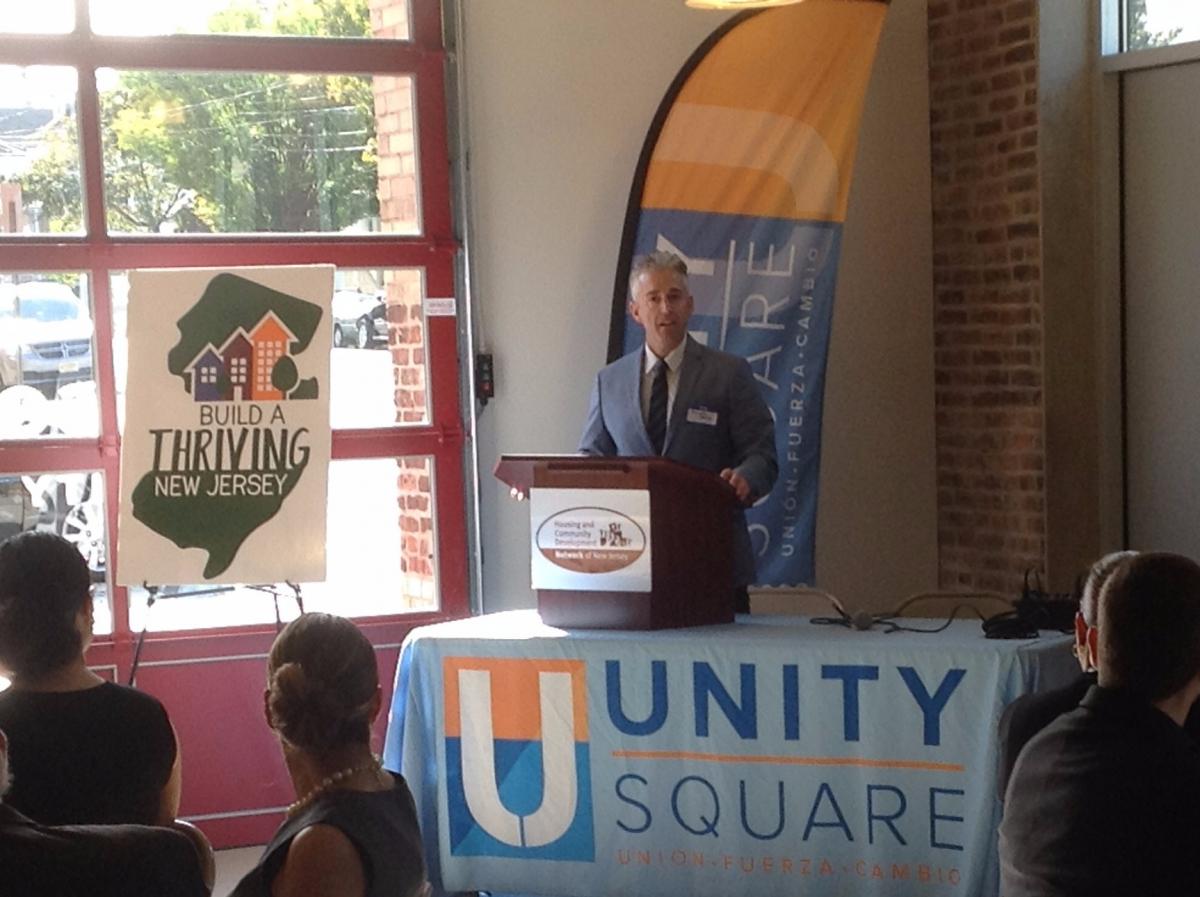 All of the speakers attested to the critical importance affordable housing holds in the battle to help both lower-to-moderate income residents and the state economy make a positive turnaround.

The campaign–which boasts over 100 endorsements from elected officials around the state–has the potential to be a major turning point in the fight, the speakers said.

“I think people are starting to see some light in regard to these critical issues,” said Councilman Hersh. “If we can put pressure on local and county governments, there’s a real opportunity [to make a change].”

Staci Berger, President and CEO of HCDNNJ, agreed: “Once funding becomes available, it’ll allow community organizers to leverage public and private investments and results should manifest pretty quickly after that.”

The primary impetus around the Build A Thriving New Jersey campaign has been the significant dropoff in funding for affordable housing programs in the last decade and the resultant difficulty it has spelled out for the state’s low-income population. 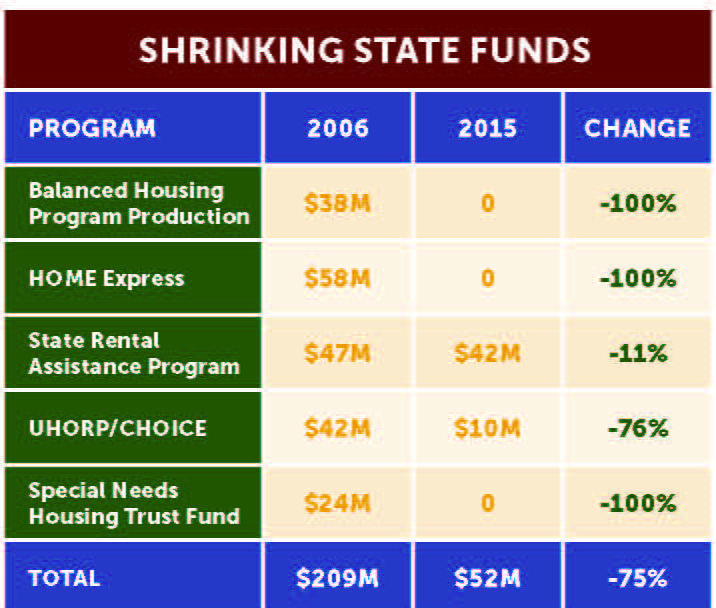 Since 2006, programs such as the Special Needs Housing Trust Fund, the Balanced Housing Program Production, HOME Express, and the State Rental Assistance Program have all seen massive cuts–with all but the lattermost having their eight-figure allotments cut down completely to zero in order to “plug budget holes.”

“Our association is struggling to meet its mission because the resources aren’t there,” Berger said. “As a non-profit it’s frustrating and difficult when you can’t provide the services and opportunities you want because government won’t provide the necessary assistance.”

Build A Thriving New Jersey intends to remedy the problem through a return of diverted and abandoned funds back into what supporters call “a strategic set of programmatic investments,” which they say will nourish the state economy.

“$600 million sounds like a lot of money, but in a $33 billion budget, it’s a small fraction of the overall pie,” said Berger. “They found money to re-do the State House overnight.  So, they can do this.” 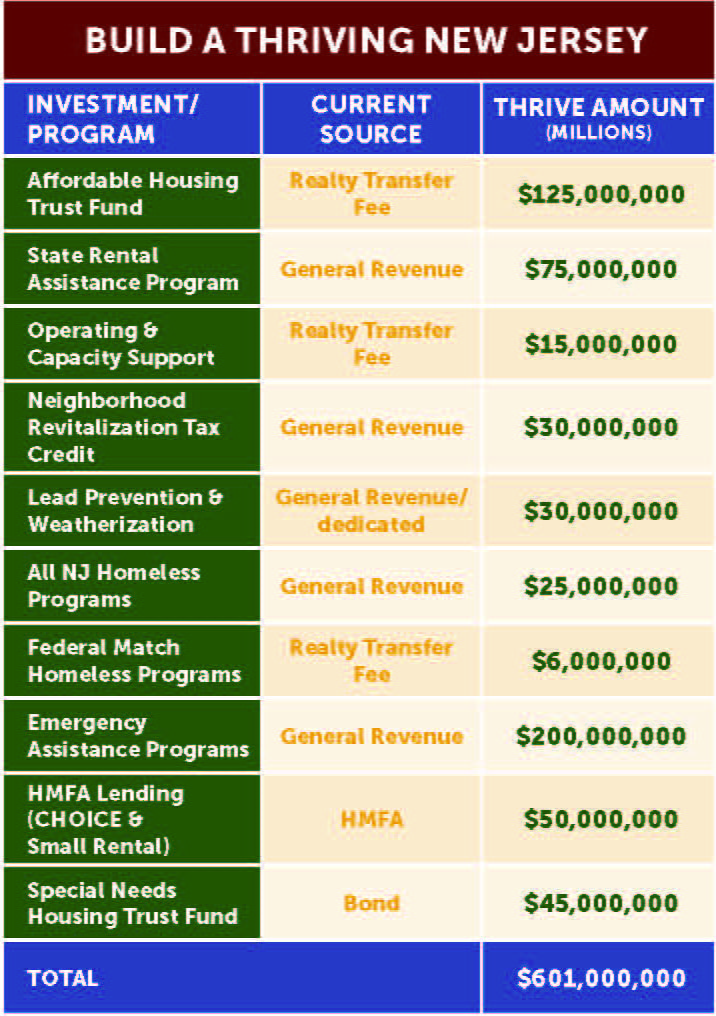 If the advocates are successful, the approximately $600 million would fund a wide variety of programs, services and initiatives that supporters assert will boost economic renewal and create stronger communities.

These include the construction of new affordable housing units, the rehabilitation of old units, rental assistance grants as well as counseling for renters, homeowners and those facing foreclosure.

In addition, the Neighborhood Revitalization Tax Credit (NRTC) allows for up to 40% of funds provided to non-profit entities carrying comprehensive revitalization plans to be used for supportive services and other neighborhood development projects if the other 60% are committed for housing and economic development.

“With the NRTC, we’ve been able to fund our community center and bring it to life,” said Jason Rowe, director of the Unity Square Neighborhood Revitalization Project–whose community center housed the event.

The community organizing and social justice initiative is run under the direction of Catholic Charities’ Diocese of Metuchen and has been able to use the credits to help better the lives of the more that 6,000 low-income residents in the neighborhood.

Recent projects leveraging NRTC funding have included property renovation–with one on Commercial Ave.having been completed this past May.  Ten more are scheduled for completion in the next 18-24 months.

“We want community members and leaders to drive forward what we do and NRTC helps us do that,” Rowe said.

Commenting on the campaign, Rowe said: “We’re believers in the power of community development and the various ways to increase quality and supply of affordable housing. It takes energy and support from the community, non-profits, and the different levels of government. [More] state investment would benefit us greatly.”

With more than 30 people in attendance at Unity Square to show their support for the campaign and more than 100 Build A Thriving New Jersey endorsements statewide, HCDNNJ’s Community Building Specialist Raphael Kasen, who helped coordinate the event, was happy with the result.

“I thought it went really well. Folks who attended were who we wanted. Having [Mayor Cahill] was tremendous. Was great to see elected officials support this campaign and promote it.” Kasen said.

With the success of the event, Kasen felt hopeful that the campaign would ultimately find success and adjusting the state budget, a document he maintains is as much “political” and “moral” as it is fiscal.

“I think the momentum is with the campaign. People understand the importance of this funding and how it’s been depleted over the years. We’re in good shape going forward.”