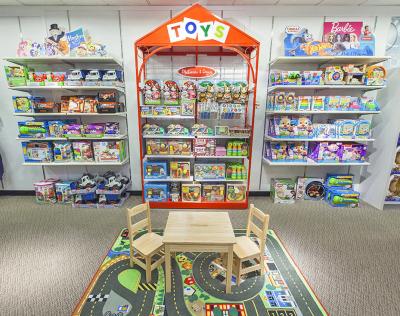 J.C. Penney Hoping to Move a Large Volume of Toys Throughout the Year

EAST BRUNSWICK, NJ–J.C. Penney is opening toy shops inside all its stores and doubling the assortment available online, the retailer said recently.

The shops, which will appear adjacent to the Disney Collection inside Penney locations, will display toys for kids of all ages including dolls, action figures, racing cars, arts and crafts, board games, plushes and learning sets from brands such as Hasbro, Mattel, Playmobil, and Fisher Price, for instance, said Penney.

"J.C. Penney has a nostalgic history of selling sought-after toys in our early Christmas catalogs, so we brought toys back last holiday season to see if they would resonate once again," said Executive Vice President and chief merchant, John Tighe.

Since the customer response was good, the company decided to increase its inventory of toys by offering them year-round and also creating fun, inviting toy shops to entice families to shop and spend more with the retailer.

And many of the shops will feature an area where children can try out the toys and play with merchandise without making a purchase.

“The toy shop inside J.C. Penney will help kids dream, imagine and explore with some of the most popular toys for toddlers, preschoolers and big kids," added the company.

In an effort to bridge the gap between digital and physical channels, Penney said it will continue to ramp up selling through multiple channels. Customer feedback prompted it to add new product categories, including bicycles, video games, outdoor trampolines, costumes and science kits.

The retailer is hoping to capture a significant portion of the $20 billion growing toy industry, added Tighe, noting an “impressive” offering both in brick-and-mortar outposts and online.

At the J.C. Penney in Midstate Mall, located in East Brunswick, the new toy department on the second level of the store was quite a mess on September 21, more than an hour before closing time.

Apparently, kids had a lot of fun playing in the small store-within-a-store, leaving toys spread out on the floor. On displays, unsightly empty ice cream cups left on shelves were waiting to be disposed of.

J.C. Penney did not respond to a request for comment regarding the new toy departments in its Garden State stores.