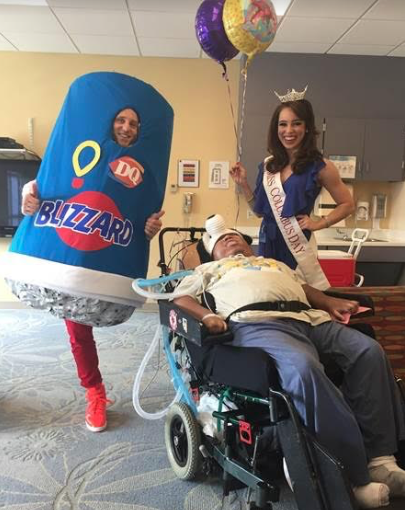 By: Steve Rodas
In: Archive

NEW BRUNSWICK, NJ—It takes a certain type of person to use their own situation, one another might easily find debilatating, and use it to lift the spirits of children in need.

Josh Sundquist – who only has one leg – is that type of person, and he recently visited the Hub City this summer to help raise funds for the Children's Miracle Network (CMN).

Eager to boast about having competed in skiing at the Turino Paralympics, Sundquist also takes time to give hope, and hopefully a good laugh, to children who spend their days in hospitals.

“I wanted to promote Miracle Treat Day with my [upside-down Dairy Queen Blizzard] costume to help raise money so that children can continue to receive the best possible care at their local children’s hospital,” Sundquist told New Brunswick Today, “just like I did when I had cancer as a nine-year-old.”

As a child, Sundquist was diagnosed with a rare form of bone cancer and given a 50% chance of survival. A year of chemotherapy treatment cost Sundquist his left leg, but didnothing to diminish his spirit.

At age thirteen, he geared up for a sport that would ultimately take him all the way Turino, Italy where he would represent the United States of America in the 2006 Paralympics: skiing.

Fast-forward to today and Sundquist is not only a motivational speaker, spokesperson, and author, but as he's grown older, he hasn’t let his silly side falter.

Although he’s donned many a costume for the past couple of years – including a flamingo, a ginerbread man, a foosball player, a lamp, and Lumiaire from “Beauty and the Beast” – this year he decided to take his talents and apply them in a different way.

“This is the first time I’ve created a costume to promote awareness of anything besides Halloween,” he continued, days after his visit to Children’s Specialized Hospital on Somerset Street in New Brunswick on July 26.

He, along with Miss Columbus Day Olivia Michael, handed out Blizzards to patients and took photos with families during their visit.

Miracle Treat Day has been held for the past 13 years, helping to raise funds for sick and injured children at Children’s Miracle Network (CMN) hospitals. The institution says it helps to treat 62 kids every minute. 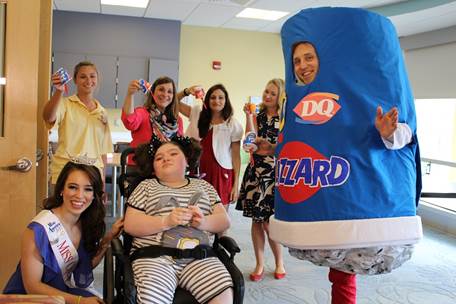 Sundquist, the author of a 2010 memoir titled Just Don’t Fall: How I Grew Up, Conquered Illness, and Made it Down the Mountain, was a former CMN patient.

Within 24 hours of his visit, a video highlighting it earned over 2 million views on Instagram and hundreds of thousands of views on Facebook as well – which has served as further motivation for him to continue to help out.

But Sundquist says he hasn’t quite decided on another organization to lend his imaginative qualities to, although he’s keeping his ear to the ground.

Oh, and he’s “certainly open to suggestions if people have creative ideas for costumes I should wear in the future.”