NEW BRUNSWICK, NJ—Jeanne M. Fox learned at a young age the self-confidence that she would use to propel herself through a career full of impressive achievements, and devout public servitude.

That self-confidence came from many places, including her “working-class hometown” of Maple Shade, NJ and her time as a student in Douglass College at Rutgers University during the mid-1970’s.

Fox got her start at the New Jersey Board of Public Utilities (NJBPU) “as a regulatory officer in 1981 and was quickly promoted to positions of increasing responsibility.”

Fox, who has lived in the city since the 1980’s, is one of the few individuals in NJBPU’s history to have climbed the ranks from staffer to commissioner. 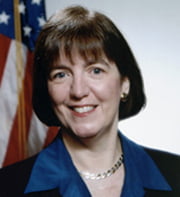 She says she has always focused on “what is in the public’s interest.”

Fox says that she spent time “hearing everyone’s point of view” and applying them, as best she could, to the industry, “within the parameters of the law.”

Her steadfast dedication to the public and private sector was a clear reason for her earning the NJUA Distinguished Service Award from the New Jersey Utilities Association (NJUA).

This honor was bestowed upon Jeanne by the NJUA at the Associations’ 102nd Annual Conference in Atlantic City. She earned the Utilities Industry’s Highest Honor for her “highly accomplished and influential career in the regulated utility industry.”

Andrew Hendry, the president and CEO of NJUA, spoke to Fox’s unwavering work ethic. She is one of 29 individuals to have won the award, being that they “have significantly moved the ball on issues pertinent to the industry.” Fox was able to put New Jersey “in the forefront” on topics such as renewable energy and energy efficiency, Hendry said.

“She works well with the industry she regulates, even if she doesn’t always agree.”

Finding herself in many discussions and disagreements over the years, Jeanne turned to what her mentor, Edward J. Bloustein, taught her during her time at Rutgers University: “You can fight like cats and dogs on issues, but still be good friends.”

Fox spends much of her time as a “tireless volunteer” with organizations such as The National Academies of Science Panel on Transmission and Distribution Resiliency, the Carnegie Mellon University’s Advisory Board for the Center for Climate Energy Decision Making: GRID Alternatives Tri-State Board of Directors.

She is also a Rutgers University Trustee Emerita and Associate Alumnae of the Douglass College President.

Of all the prestigious organizations to give her time to, one of her favorites, is the Girl Scouts. As a member of the Girl Scouts of Central and Southern NJ Board Development Committee, she is able to help build the same self confidence that helped her succeed in life, in the female youth in this area.

Fox and the Board work with troops in cities such as Trenton, Camden, and New Brunswick to ensure that girls from families of all financial means are able to be a part of this “wonderful opportunity for girls to develop, succeed, work together as a team, and accomplish things for the public.”

In looking back at her past, Jeanne remarked that “sometimes you need to go beyond the regulation and understand the purpose, and if the purpose is not being served you do what it is in the public interest.” This was especially pertinent during her time with the NJ DEP (known then as the NJ DEPE) on New Brunswick’s Boyd Park project, which was completed along the Raritan River.

As a long-time Hub City resident, she spoke highly of the city’s growth over the past decades, and is glad “they call it the hub city” because she feels “that’s a great name for it.”

Fox says she is humbled that she was chosen for this award, and thankful for those who saw the true grit behind her efforts.

When asked what advice she wanted to give to the students who will be starting their own academic journey’s this fall, she paused and said, “Individuals can make a difference,” and that you can achieve a good life if you work hard enough, no matter the community you come from.