NEW BRUNSWICK, NJ—The summer of 1967 saw racial tensions flare into violence and civil unrest in Detroit, Newark, and more than 100 other cities across the country.

The volatile year saw 159 riots nationwide, and informed the country of black frustration and agitations for civil rights.

While New Brunswick was not immune from the unrest, no one was killed here and many view it as a key turning point in the city’s history.

In the wake of the chaos, President Lyndon B. Johnson established The National Advisory Committee on Civil Disorders, known as the Kerner Commission, to investigate the causes of the race riots in the United States and provide suggestions for the future.

The commission’s report suggested that white racism was one main cause of the urban violence, and it called for an end to de facto segregation and the creation of new housing and jobs.

The commission also praised New Brunswick’s Mayor Patricia Sheehan as virtually the only mayor in the nation to de-escalate the conflicts in her city. 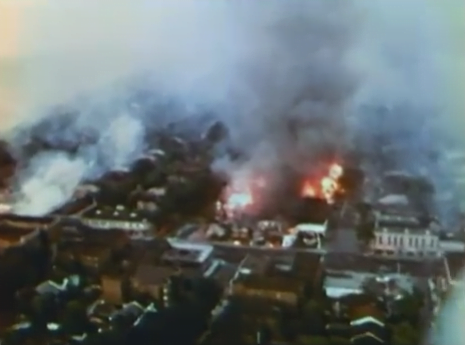 It all started when discord broke out the New Jersey’s largest city, Newark, on the night of July 12, 1967.

That evening, residents of Hayes Homes housing project had seen two white police officers drag a beaten and incapacitated man into the 4th Precinct, and a rumor started that the man was killed while being taken into custody.

Protesters crowded and threw bricks and rocks at police officers when they emerged wearing hard hats and wielding clubs. Some residents ran to City Hall to shout in protest.

After midnight, shop windows were broken and looting began, initiating four days of destruction and unrest that left 26 people dead and hundreds injured.

A fight broke out in a diner on Friday, July 14 and black teens began breaking store windows and throwing rocks at police cars.

Two days later, a white police officer, John Gleason, was beaten and shot dead after trying to break up a confrontation between a group of young black men and a white motorcycle gang. 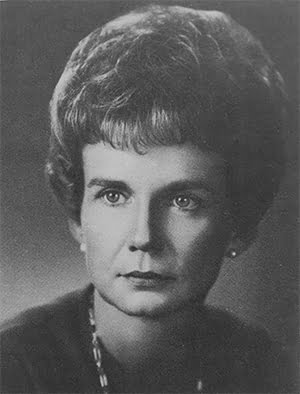 Talk of impending unrest in New Brunswick spread, and Mayor Patricia Sheehan later described the feeling of “a fever in the air.”

Fearing that violence would tip off on the night of the 17th, a community action agency known as the MCEOC delivered a memo to the Mayor.

It warned that “the social conditions bred by neglect and decay which have festered for too long obviously cannot be redressed in enough time to head off a conflagration [which] could be disastrous to people in this area of all races.”

Plans were made to rely on police if violence should break out and a midnight curfew was imposed throughout the city.

Around 9 p.m. a crowd of about 200 black residents gathered at the corner of George Street and Remsen Avenue near the Memorial Gardens housing project.

They were mostly teenagers, led by high school students who were upset about unfair treatment in the public schools and unemployment.

The crowd headed down George Street toward the central business district as their numbers grew to about 300.

Protesters shattered shop windows and looted several stores. Two cars were overturned and one burned, and a few Molotov cocktails were thrown that failed to destroy any property.

Sheehan ordered the police to exercise restraint and most heeded her instruction, urging the youths to get off the street and go home. By the end of the night 50 people including 18 juveniles, all of them black, had been arrested for looting, possession of stolen property, carrying weapons, and loitering.

The next day, MCEOC leaders organized an afternoon meeting between Mayor Sheehan and a group of local youths shared their frustrations over schools, recreation, housing, and jobs.

Sheehan promised to investigate a school principal who they felt treated black students unfairly, and some of the youths agreed to broadcast messages on the city radio station urging people not to rush the streets that night, saying that the Mayor had talked to and pledged to work with them.

Still, a crowd of about 200 gathered again that evening at George Street and Remsen Avenue despite the mayor’s effort and the 10 p.m. curfew.

The Kerner Commission report on the disturbance described the crowd as “older and rougher” than the one the previous night.

Policemen armed with machine guns formed a barricade to prevent protesters from advancing to the city’s business district.

Someone shouted at the commissioner that if the cops didn’t get out of their neighborhood, everyone would go and get their guns. If he moved them out, they would leave.

Mayor Sheehan ordered Chief Petrone to withdraw the officers. The New Brunswick Spokesman reported that when he balked at the command, her political advisor grabbed the police radio and ordered the officers to immediately return to the station.

Protesters walked to the police headquarters and demanded to talk to the mayor. Sheehan addressed the crowd with a microphone and agreed that their grievances were valid, telling them “This is your city, too.”

The city was ready to give her a chance, partly because she had just taken office six weeks prior following in an emotional election that ousted the City Hall administration that had governed for 27 years. 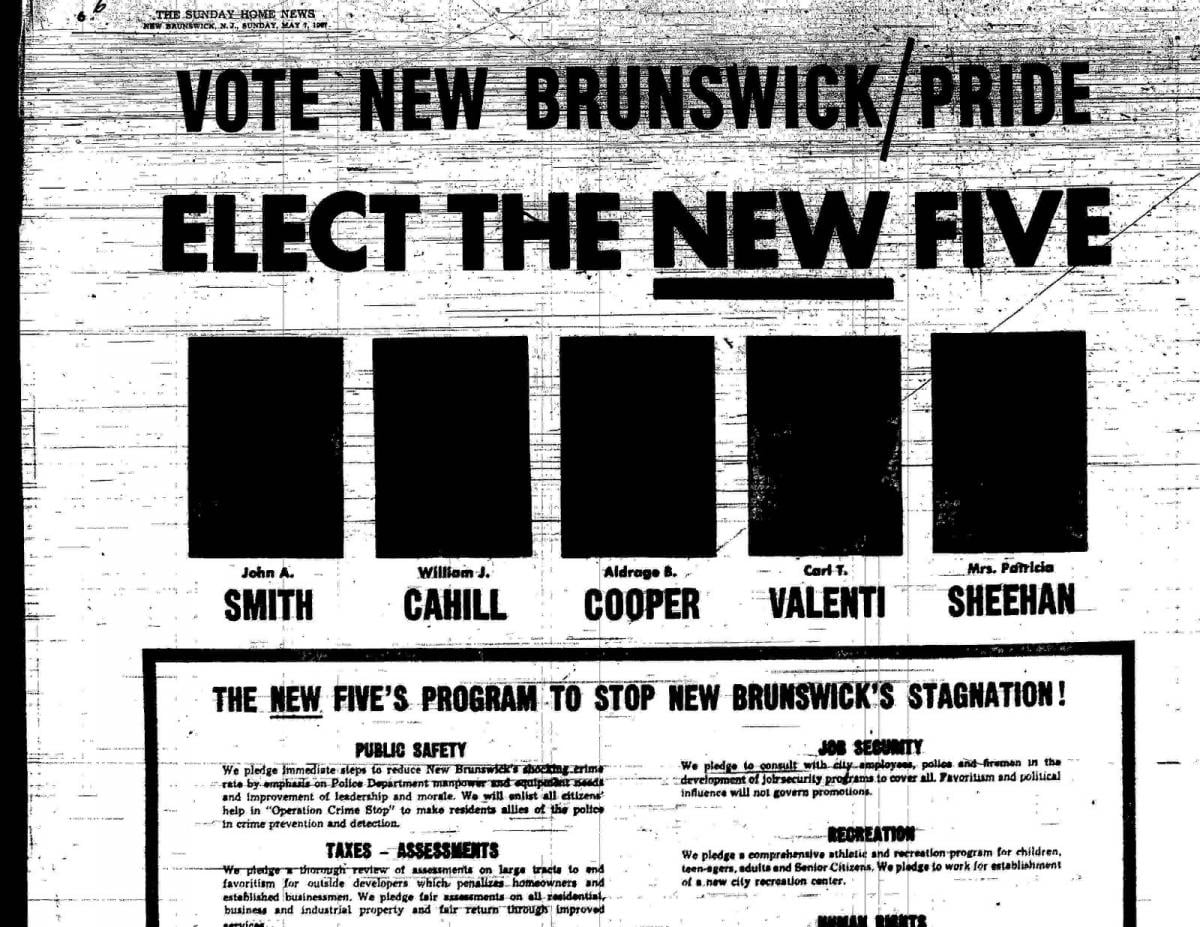 Her team of candidates, known as “The New Five,” had promised as candidates to improve race relations in the city, and according to C. Judson Hamlin, Director of the Middlesex County Legal Services Corporation, it marked the first time that blacks had significantly participated in a local campaign.

Many of the issues that fomented unrest in New Brunswick were comparable to other cities.

The young people of New Brunswick had made themselves heard and started a dialogue for changes to be made, but the city still struggled from abandonment and disinvestment.

Deindustrialization and suburbanization had reshaped the region throughout the 1950’s and 1960’s- factories shut down and laid off workers, and many residents chose to move to suburban developments where housing prices and taxes were lower. 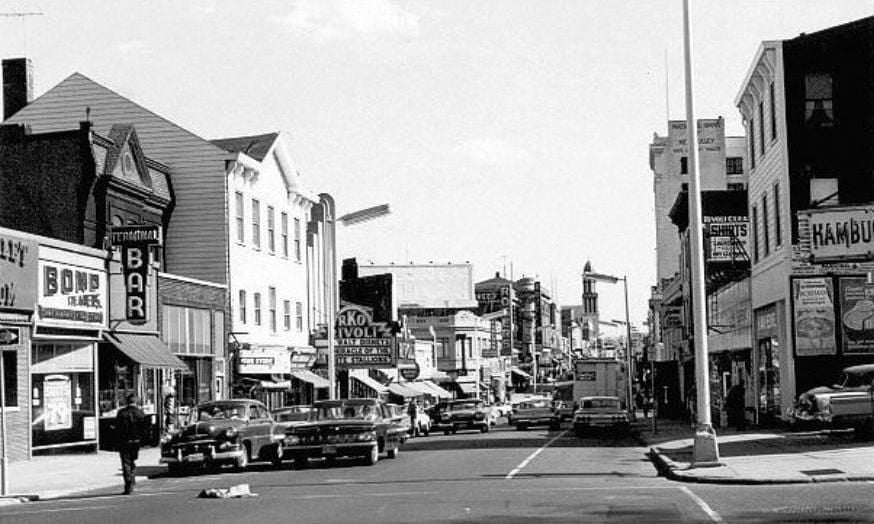 Stores closed along once-bustling George Street with the growth of malls and the city lost substantial tax revenue. As middle-class families moved out, the black population grew to 22.7% of New Brunswick residents by 1970, and nearly a third of the city’s nonwhite families lived in poverty.

Johnson & Johnson (J&J), the city’s largest employer at the time, had struggled to integrate its workforce.

The company offered jobs to Hungarian refugees who flocked to the New Brunswick area after a 1956 revolution, but had not extended the same affirmative action to African-Americans with deep roots in New Brunswick.

After meeting with President Johnson and other corporations about the “urban problem,” J&J executives put John Heldrich in charge of the company’s efforts to revitalize the city.

J&J would go on to cooperate with the city to launch non-profit organizations including New Brunswick Tomorow and New Brunswick Development Corporation (DEVCO).

The corporation also bought up eleven blocks of real estate to build a massiv new headquarters in New Brunswick.

Heldrich was partnered with Harold R. Sims, the executive director of the National Urban League and a prominent public figure, to integrate the company’s workforce.

Roy Epps joined the Urban League (which later became the Civic League of Greater New Brunswick) as a community social worker in September of 1967.

It was right around the time when the League began to receive more funding and establish new programs.

The League also created the Home and School Association for parents and students to voice opinions on the lack of curriculum material related to African-Americans, and to start up new clubs and activities.

“One of the reasons we got involved in the disturbance was the issues in schools,” said Epps. “It wasn’t until there were some resolutions around 1969, 1970 that people were more comfortable.” 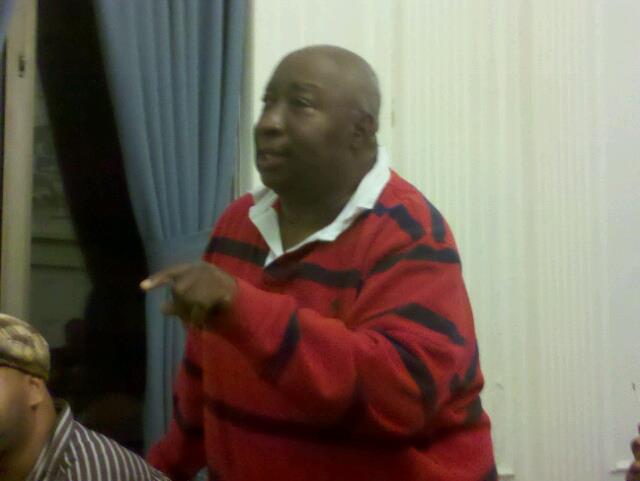 David Harris was president of the New Brunswick chapter of the Urban League at the time and he believes the city schools remain a major problem a half-century later.

“The core issue was never effectively addressed, and that was public schools for poor children.”

Harris, who now runs a daycare center, says that young professionals are moving out of New Brunswick when their children reach school age to attend better districts.

He draws similarities to 1967, saying that the system is still under de facto segregation because parents are not allowed to send their children to better schools in neighboring towns.

The New Jersey Department of Education classifies the city’s school district in the lowest of eight groupings. As it was in the 1960’s, the schools are educating a shifting demographic that remains overwhelmingly low-income.

Half of New Brunswick residents self-identify as Hispanic, and Hispanics make up 88% of the students in the school system.

“At least when New Brunswick had a black majority, they spoke English,” said Harris. “Kids are born here to Mexican parents and don’t know a thing about country. We could at least do a better job using their own language to teach them.”

Unions and board members in New Brunswick also oppose charter schools, which Harris believes could operate with more freedom to test different methods for New Brunswick students to catch up, such as staying open all year.

The city’s Catholic schools once offered an alternative to public schools, but as the number of parishioners in the church and students in the schools shrank dramatically, they all closed.

St. Peter’s High School was the final Catholic school in New Brunswick to close in 2010.