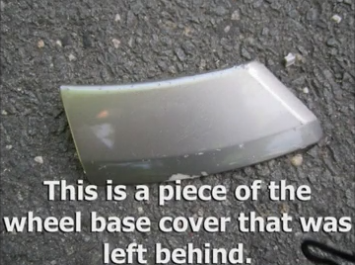 CRANBURY, NJ—Authorities are offering a cash reward to anyone with information that leads to the arrest of a driver involved in a hit-and-run that injured a 13-year-old and killed her dog, "Panda."

The crash occurred on Monday, May 10, shortly before 6:20 pm at the intersection of South Main Street and Evans Drive.

Both the 13-year-old and Panda were struck by a vehicle described as a “beige or champagne-color Ford Expedition with silver trim,” according to a statement from the Middlesex County Prosecutor's Office (MCPO).

The driver, who was described in a video released by the family as a "white male with a beard," fled the scene shortly after the crash.  What factors may have led to led to the crash are unknown.

A small piece of the SUV was left behind, according to the video.

The SUV was last seen headed north on Main Street, and the 13-year-old girl was transported to Robert Wood Johnson University Hospital.

Cranbury Police Department has not responded to a request for a copy of the crash report, and the MCPO said that it is not involved in the investigation.

Anyone with information can anonymously contact Crime Stoppers of Middlesex County at 1-800-939-9600, where they will be given instructions and how to get their reward.

They can also message 274637 (CRIMES) with the keyword ‘’midtip’’ or go on their website at middlesextips.com.

According to TapInto South Brunswick-Cranbury, police are asking residents on North Main Street or Plainsboro Road with surveillance cameras that captured traffic images between 6:10 and 6:30 p.m. on May 10 to call the department at (609) 395-0031.