NEWARK, NJ—The outspoken student leader of a Rutgers University organization advocating for undocumented immigrants remained free after a meeting with Immigration and Customs Enforcement (ICE) on May 9.

A crowd of over 100 gathered in front of the federal building on Broad Street in Newark to support and protest. Carimer Andujar received a summons last month for the interview with a federal deportation officer, spreading fear that she was targeted specifically for speaking out against the Trump administration.

“I was asked a couple of questions and had my fingerprints taken today,” said Andujar. “One question I was asked today is whether I will continue fighting for the rights of undocumented people and the answer to that question is yes.”

“It does not matter how many interviews ICE asks me to do, my dedication to undocumented students and ensuring they have opportunities they deserve remains. That has not changed and will never change.”

Andujar was brought into the United States by her mother at the age of four, who fled domestic violence in the Dominican Republic.

She is living in the country under protected status through Deferred Action for Childhood Arrivals (DACA), the President Barack Obama’s executive order that grants renewable visas to undocumented people brought into the country as children.

Andujar applied for renewal of her DACA in December and received a letter on April 24th requesting more information before it could be approved, as two items were unintentionally left blank.

It is unlikely that the application error led to the interview notice from ICE, because United States Citizenship and Immigration Services (USCIS) handles DACA applications.

ICE sent Andujar the summons in March, before she was alerted of the issue with her application. 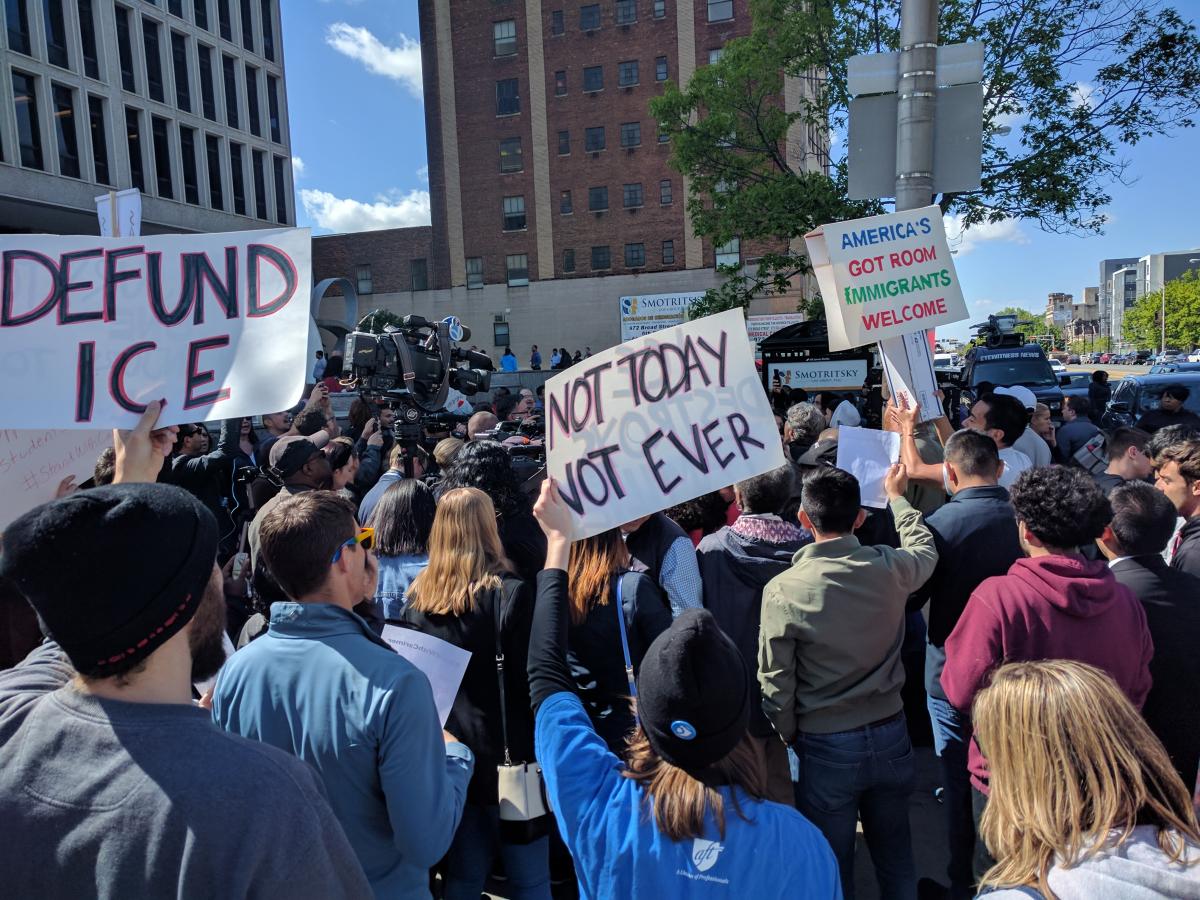 The crowd of protesters waiting for Andujar to emerge from the interview included students from Rutgers New Brunswick and Newark, members of the Rutgers faculty union, religious leaders from Faith in New Jersey, and members of the New Labor Party.

Rachel Lewis, the director of the Newark municipal ID program, attended on behalf of Mayor Ras Baraka and expressed support for Carimer.

Thalya Reyes, a public policy and city planning graduate student at Rutgers, is a friend of Andujar and fellow organizer.

She gathered students last week to make calls to representatives on her behalf.  As a result, Senators Cory Booker and Robert Menendez released statements in support of Andujar, as did Passaic Assemblyman Gary Schaer.

“I want to thank all those who have come out to support Carimer Andujar. Her story is that of so many immigrants throughout our country and we need stand up and say ‘no more.’” said Pallone.

“Your voices will send a message to the Trump administration that its extreme policies are contrary to American values and that they are simply unacceptable.”

“I met her at the Forum for Dialogue held by Rutgers Student Peacemakers,” said Reyes. “Carimer is going to be living with me next year and is my friend, so when I heard she was under threat of deportation I had to come out.”

Sara Lundy, a third-year graduate student at Rutgers studying social work, works for the Center for Latino Arts and Culture at Rutgers and is a supervisor for UndocuRutgers, the student organization that Andujar is president of.

Together they organized a conference earlier this year to educate K-12 teachers on immigration issues and how to support undocumented students going to college.

“This is why we created UndocuRutgers,” said Josue Serrano, vice president of UndocuRutgers, to the crowd. “To fight for people who are marginalized. The movements start in the universities, they start with educated young leaders.”

Highland Park pastor Rev. Seth Kaper-Dale was also in attendance and spoke about four Indonesian men arrested at the same federal building, and sent to Elizabeth Detention Center by ICE.

He had been providing the men sanctuary at his church for the past few years and advocating for them to stay in the U.S. The men, who have no criminal records, have been living in New Jersey for over 20 years.

They fled religious persecution in their country but waited too long to apply for asylum.

ICE focuses on individuals who “pose a threat to national security,” but a statement from spokesman Luis Martinez said the agency will “no longer exempt classes or categories” of unauthorized immigrants from enforcement.

President Trump has told Dreamers to “rest easy,” but new data from two federal immigration agencies shows a sharp uptick in revocations of DACA status due to alleged criminal activity since the end of the Obama presidency.

Having DACA status means a person is a non-priority for deportation but does not grant lawful status for them to stay in the country.

Jason Scott Camillo, Carimer’s lawyer, said “As long as she has DACA she is fine, but DACA is tenuous in itself.”