The fire started about 15 minutes prior to the start of the Rutgers vs. Penn State University football game.

According to the New Brunswick Police Department (NBPD) news release, nine vehicles, a storage bin, and some trash were engulfed in flames. 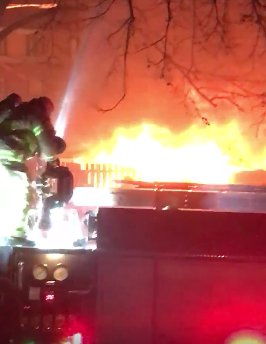 The fire department promptly responded and was able to extinguish the fires with minimal spread and additional damage.

But nearly a week later, two damaged vehicles and a pile of burned garbage were still in the area behind the fraternity house.

Both were treated for non-life threatening injuries, according to the news release.

A third suspect was later found on Livingston Avenue, and identified as Michael Santitoro, a 22-year-old male from Freehold.

All three suspects are being charged for arson and conspiracy to commit arson.  It marks at least the second arson case being investigated by local police in less than a month.

This investigation in on-going, and anyone with information is asked to contact NBPD Detective Harry Lemmerling at (732) 745-5217.