WOODBRIDGE, NJ—On August 14, at the Annual India Day parade, a member of the Asian Indian community was sworn in to serve the Fourth Ward on the Township Council for the first time in history.

Woodbridge is the state’s sixth-largest muncipality by population, with just over 100,00 residents, a quarter of which are of Asian descent.

The Fourth Ward includes the Iselin and Menlo Park Terrace sections of the Township, home to a large concentration of Asian Indians.

Virbhadra “Viru” Patel was sworn into to replace James Major as the Fourth Ward’s Councilman just five days after his Major’s resignation took the Township by surprise.

“It is such an honor to be sworn in on India Square together with so many of my fellow South Asian Americans,” was quoted as saying in MyCentralJersey.com.

Patel joins the Council, not after winning an election, but rather following a temporary appointment by the Democratic Party.

It underscores the power of Mayor Jon MacCormac, who has influence over the party organization.

By law, when an elected official resigns in the middle of their term, their party’s organization get to propose three potential temporary replacements, and the Township Council gets to pick from them.

By the time Major announced his resignation on August 9, the Woodbridge Democratic Organization had already proposed Janice Kassner, Daniel Osborne, and Patel.

Within minutes, the Township Council unanimously selected Patel, on a motion made by Councilman Pete Dalina.

Patel’s swearing-in ceremony was reminscent of that of Kyle Anderson, who became the first non-white person sworn into local office in Woodbridge on Martin Luther King, Jr. Day 2011.

Like Patel, he took office following the resignation of his predecessor, and a temporary appointment from the Democratic Party.

In addition to Patel and Anderson, the remaining members of the Council include two white women, four white men, and one Hispanic woman.

According to Patel’s Facebok page, he’s a former Senior Transportation Specialist at NYC DOT, a former Civil Engineer at Frederic R Harris Inc.. He hold a master’s degree in Traffic & Transportation Engineering from the NJ Institute of Technology.

Patel’s rise to power coincides with the Indian-American community’s increasing political influence in Woodbridge.  As we reported, two-thirds of the candidates seeking seats on the Township’s school board in the November election are South Asian. 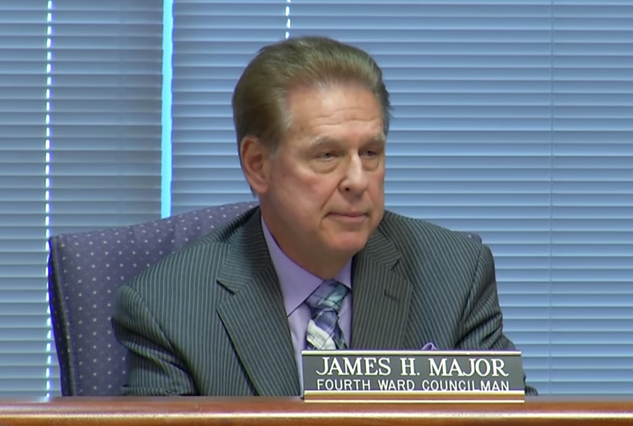 Major stepped down on August 9, ostensibly to take a job at the public agency responsible for the county landfill and much of its sewer system.

“This is bittersweet for me… I’m sad to leave the Council and the work that’s become my passion.”

Major thanked his family, his constituents and his colleagues on the Council, as well as several other community leaders and government officials, calling Woodbridge “probably the most proactive and effective administration in the state.”

He spoke of his work on behalf of the Oak Tree area, citing several accomplishments including “quality of life improvements” and improvements to the parking situation there.

“It’s all good, but I’ll miss you all. Thank you very much,” said Major.

“Jim might be coming off the Council, but he will have a role going forward with us,” said Mayor Jon MacCormac.

Major left the Council to take a $135,000 salary as an Administrative Coordinator for the Middlesex County Utilities Authority (MCUA).

Major started the new job on August 22 and reports to Donato Tanzi, the Division Manger of the Authority’s Wastewater Division.

But the MCUA spokesperson said that Major had actually interviewed for the Division Manager job, which had been advertised through the NJ League of Municipalities, the NJ Association of Counties, and the NJ Water Environment Association.

“James Major was offered the position of Administrative Coordinator, an existing position, which has been vacant for several years,” confirmed Anthony Cicatello of C-N Communications, a public relations company that counts the MCUA among its clients.