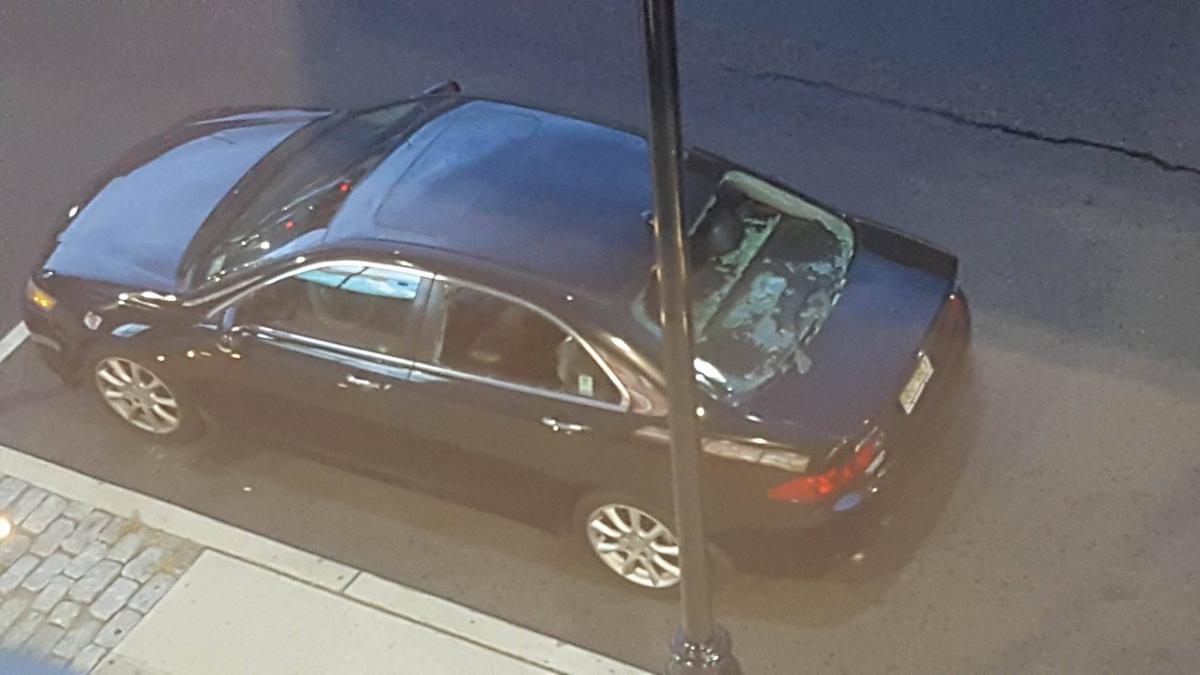 More than a half-dozen officers were seen questioning a pair of young people, and aggressively searching damaged vehicle.

It wasn't totally clear what was going on, but apparently it all began with "reports of gunshots and a fleeing vehicle," according to the New Brunswick Police Department (NBPD).

NBPD spokesperson Captain JT Miller said that at about 7:20pm, officers arriving somewhere on Welton Street "learned that the fleeing vehicle had its window shattered by a strike from a baseball bat."

"While officers were at the Welton Street location Mr. Kevin Reyes-Sierra attempted to flee from investigating officers and when apprehended was found to be in violation of various narcotic offenses as well," said Miller, who added that "the motive behind the criminal mischief to the vehicle is still under investigation."

However, criminal mischief does not appear to be one of the offenses Reyes-Sierra was charged with.

Reyes-Sierra, a 21-year-old resident of Lawrence Street in New Brunswick, has been in the Middlesex County Jail ever since, according to the jail's records department.

Though his bail was set at $100,000, Reyes-Sierra will likely be unable to bail out because his arrest constitutes a violation of the Intensive Supervision Program (ISP) he had previously been released under.

Police found no weapon or evidence of gunshots, and no injuries were reported.

By 8pm, police had located the smashed-up vehicle just a couple blocks away from the department's headquarters, outside the Key Food on Kirkpatrick Street.

New Brunswick Today captured some of the scene on video.

After a thorough search of the vehicle, officers arrested a 20-year-old woman from North Brunswick on charges that police have been vague about.

Miller originally said the woman was charged with "possession of a controlled dangerous substance," but more than a week later, when asked again he characterized the charges as "various narcotics offenses."

Officers at the scene were heard saying the word "paraphernelia," just as they were about to arrest the woman, but it's not clear what they claimed to find.

A young man who also appeared to be undergoing questioning at the scene of the arrest, had words with police after the arrest as he walked away.

The woman was later released on her own recognizance, according to an arrest report.

"The circumstances behind the motor vehicle stop which led to the arrest is still under investigation," said Miller at the time.

After initially only providing a couple sentences of information in response to a request for public information about the incident, Miller provided more information upon a subsequent request.  The initial response had made no mention of Reyes-Sierra, and also got the name of the other suspect wrong, inverting her first and last name.

Following the more comprehensive Open Public Records Act (OPRA) request filed by this newspaper, Miller provided the arrest reports for both suspects.  But the reports don't provide many details, instead referencing additonal "CIR" reports that Miller declined to provide.

Miller also declined to provide copies of the summonses issued in the incidents.

"This investigation is an ongoing criminal investigation and pursuant to [OPRA] any other investigative reports are not subject to release," said Miller.  "Summonses are court documents and not maintained by the New Brunswick Police Department."

"I recognize the intent and importance of [OPRA] but this is an excellent example of why it is also important to be cautious when releasing information prematurely particularly when an investigation is ongoing," Miller continued, speaking of his own initial mistake of mixing up the female suspect's first and last names.  "It is important to balance the release of information to the public against the respect of privacy, security, and integrity of investigations."