NEW BRUNSWICK, NJ—Recreation Park, located between Pine and Sandford Streets, and Nichol and Reservoir Avenues, hosted its grand opening on July 28, and is now open daily from sunrise to sunset.

The opening of the park celebrates a long process of planning to refurbish the park, instigated by the Civic League of Greater New Brunswick, which began in 2013.

“I spent a lot of time here as a young man and a little boy playing in Recreation Park… This park, like all parks in the city, belong to you,” Cahill told the crowd. All told, the project cost the city more than $2.8 million.

New features include a concrete skate park, a playground, a basketball court, a water spray area, and two parking lots with 24 spaces each.

“There’s a few small things to be completed, so the total may be a bit higher,” said city spokesperson Jennifer Bradshaw.

Pre-existing features, such as the two basketball courts and athletic fields, have been refurbished or expanded.

One of the fields will be put to use as an area for junior soccer while the other adjacent field is for multi-purpose use. However, these fields will be unavailable for use in the immediate future because the sod needs two seasons to mature.

Cahill said that the bathroom facilities in the park should be opened within the next two to three weeks.  For the time being, the park offers portable toilets. 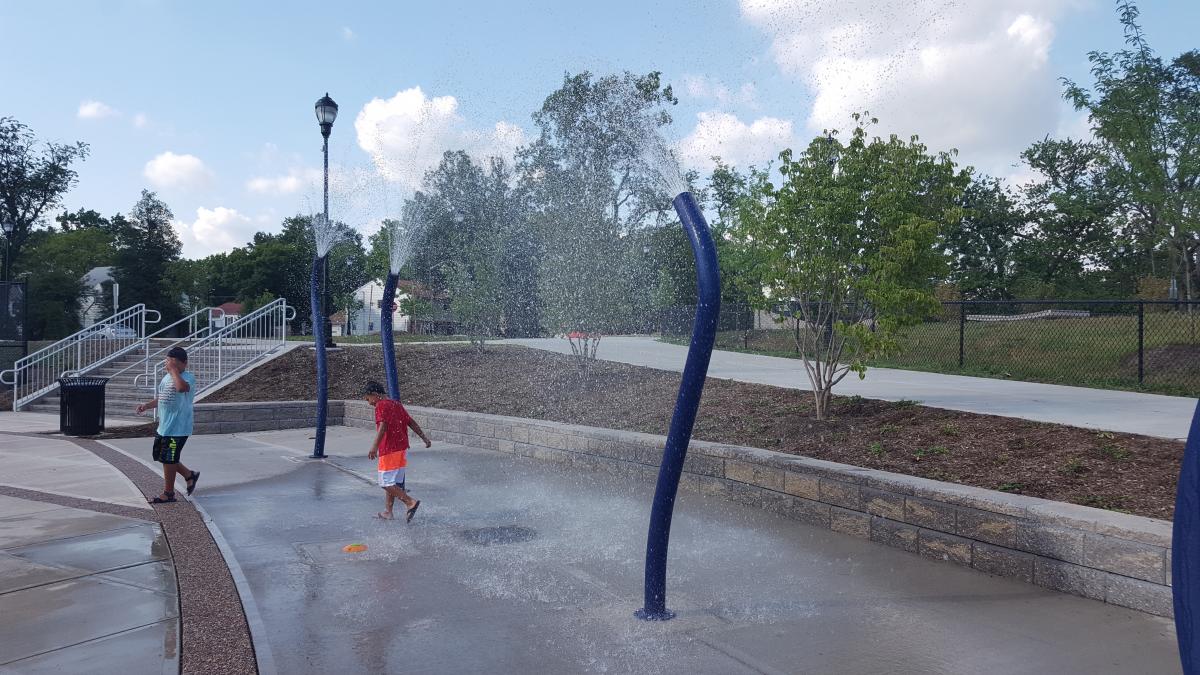 As residents look for ways to beat the summer heat, the park offers one new feature to help keep its users cool.

The spray area, consisting of two tall metal fountains in a small, circular section of sidewalk, is active daily from 9:30 a.m to 6 p.m.

All one has to do is press down on an orange and green colored button located on the middle of the sprinklers for the water to begin sprinkling out.  It stops automatically after a minute.

But perhaps the biggest addition to the park is a concrete area for skateboarding.

New Brunswick Parks and Gardens Commission member and Sandford Street resident Vincent Rifici said, “We’re very excited about it, I just hope kids don’t fall and hurt themselves skating down the sidewalk on our street.”

While the park only reached completion this past week, the skate park portion has been ostensibly completed and usable since early spring, although “No Trespassing” signs forbade potential users from accessing the area.

Despite such warnings, skateboarders would regularly use the park when construction workers weren’t present on site, often to be quickly ejected by police.

14-year old local skater John commented, “I don’t know why they did that. I’m here skating by myself, not doing anything wrong, and they always would kick me out. I’m just a kid,” despite concerns on the cities part over safety and allowing grass to grow in.

The official opening comes a week after the city allowed NJ Skate Shop one day of use to host a demonstration by the Vans skate team as part of their Pro Skate Summer Tour. After the event, the park was once again closed for use.

Local and regional skaters were allowed a first real taste of the park and were happy to have somewhere to skate.

Since opening, Recreation Park also played host to National Night Out, an annual celebration of police-communty partnerships, along with seven other locations throughout the city.

The park will also continue to serve as a PLAY S.A.F.E. site, a summer city program intended to create opportunities for kids to stay active.