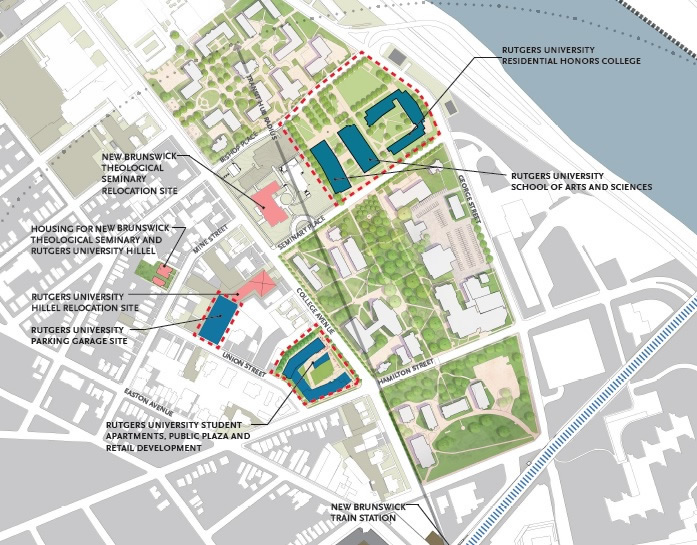 NEW BRUNSWICK, NJ—Rutgers University is on the verge of opening a highrise apartment complex for its students at the intersection of College Avenue and Hamilton Street.

"The Yard," as the developer has called the project, is a 220,000 square foot building that surrounds a small park with a large video screen.

This building will follow in the multi-use style of new apartments on the school's Livingston Campus, by featuring retail and public green space along the ground floor of the development.

Students will start moving in on August 28, and at least five of the stores are slated to open up in the week prior.

The units vary in size between 1 and 4 bedrooms, with most single-room apartments reserved for resident assistants. The housing was made available through the Rutgers housing lottery system, which gives an advantage to those with more seniority.

Prior to construction, this property was a parking lot owned by the university that once hosted Rutgers’ famous grease trucks, New Brunswick’s sandwich-based brand of food truck.

“The Yard is on the cutting edge of creative placemaking," said Chris Paladino, the President of the New Brunswick Development Corporation (DEVCO), the private developer that teamed up with Rutgers on the project.

Those who do choose to meet at The Yard may do so in the 25,000 square foot park that connects the building to the street through ample seating and open green space.

Once through this approach, airplane-style hangar doors welcome guests to a first floor filled with long tables, soft seating, charging stations for mobile devices, and power outlets, as well as the restaurants in the project.

The Scott Hall bus stop, long disrupted by construction on this property, will also receive a facelift in a separate university project.

Stylistically, The Yard is comprised of three tiered rectangles, made variably of terra cotta, granite, glass, and metal that form a U-shape around the landscaped square out front.

The building is 14 stories at its tallest point, towering over the surrounding buildings which, excluding a few recent Rutgers developments, don’t exceed 3-4 stories.

Parking will not be provided, as is the case with all College Avenue housing. This will leave The Yard’s 443 occupants to compete in the already saturated parking market around campus.

Even developments in dense, transit-oriented areas such as this are often required to supply .5 parking spots per resident.

Past designs for the College Avenue Redevelopment Initiative included a parking garage behind the nearly complete Eva and Arie Halpern Hillel House down the street.

Those plans have since been abandoned, as were prior plans that called for a parking garage on George Street behind Murray Hall.

The College Avenue Redevelopment Initiative is a public-private partnership between Rutgers and DEVCO that has overseen the recent construction of the New Brunswick Theological Seminary (NBTS), as well as Rutgers new Honors College and an Academic Building set to open this fall.

The development was made by a land swap involving Rutgers, NBTS, and the Rutgers Hillel.  Another private developer, Construction Management Associates, also ended up with a piece of land on Mine Street to build a private apartment complex which will house NBTS students among others.

The 14-story project cost $91 million, and was partially supported by $33 million in Urban Transit Hub Tax Credits (UTHTC) from the New Jersey Economic Development Authority, which were also used to acquire capital to fund construction of the Honors College.

Rutgers is the first University to use UTHTC tax credits, which are available to developers within a half-mile of NJ Transit, PATH, PATCO, or light rail stations in a number of NJ cities, including New Brunswick.

This is only one of a number of Rutgers projects intended to bolster the on-campus student housing stock.

Rutgers’ recently adopted physical master plan calls for this in order to curb the number of students renting off campus within the city and to define the borders between campus and the city.

Across town, a new 37-student "global village" dormitory is also set to open this fall on the Cook/Douglass campus.