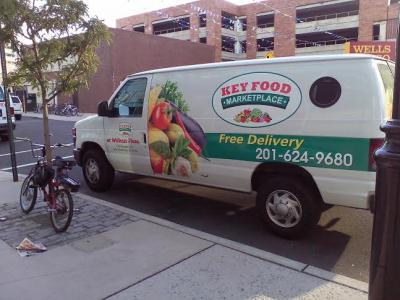 As NBToday reported in February, the store was using two vans to make over 200 such "deliveries" per week.

"[The driver of the Nissan] stated that she stopped to make a left turn… and was struck in the rear by [the Key Food van]," reads the report, filed by NBPD officer Reinaldo Rodriguez.

According to the report, the Key Food van "left the scene" following the crash.

The driver of the vehicle that was struck "was able to describe vehicle as white Ford Key Foods van with an Hispanic Male Driver," reads the report.

Police located the van near the supermarket, and noted that it had "damage to [the] front right bumper."

"Our stores are independently owned and operated, so delivery policies are set at each owner's discretion," said Rachel Geissler, a spokesperson for Key Food.

Geissler did not respond to questions from NBT about the crash report, which was made available on the city's website.

A Key Food employee told us they stopped making deliveries because there weren't many customers in need of it.

But when we told told her about the crash report, she said that, "A customer had claimed that it was a hit and run."

A few weeks after the crash, the store began advertising that it would offer deliveries on Friday, Saturday, and Sunday, but it didn't always follow through on the offer.

As for Anderson Rodriguez, the driver charged in the crash, it's unknown if he still continues to work for the company.