According to New Brunswick Police Department (NBPD) spokesperson Captain JT Miller, the arrest was “in regards to the theft of a motor vehicle on Somerset Street.”

Police pursued Edwards in a “high-speed chase,” according to one source, and it’s not clear how the pursuit came to an end.

Edwards was arrested “on the 100 block of Sandford Street,” according to Miller.  The “100 block” is actually composed of at least three blocks between Commercial and Lee Avenues.

Other than the fact that Edwards was charged with “eluding, motor vehicle theft, robbery and receiving stolen property,” police have not revealed much else about the alleged crimes.

The county jail’s records department confirmed that Edwards is still being held on $75,000 bail nine days after the arrest, with no option to get a bail bond for 10% of that amount.

Whoever may want to bail Edwards out will also have to provide “bail source” information about where they got the money before his release will be approved, according to the records department.

The NBPD’s spokesperson appeared somewhat hestitant to discuss the situation, and the incident fits a pattern of increasingly fewer crimes being publicized by the department.

“The New Brunswick Police Department does not have any record of a Jamal Edwards being arrested on August 11, 2016,” responded Miller.

It was only after we asked, “How about on August 10?” that Miller gave up any info.

Still, the Captain’s response on August 16 left out several details that the state’s public records law says ought to be made public “within 24 hours of a request or as soon as practicable.”

Despite a request from this newspaper made under section 3(b) of the state’s Open Public Records Act (OPRA), Miller still has not provided some of the basic information that he is typically required to reveal under the law, including:

“I have provided all of the information I am prepared to release at this time. Thank you for your interest in this matter,” wrote Miller, in what is becoming a familiar refrain.

But Miller issued no “brief statement explaining the decision” besides saying that he has “provided all the information he is prepared to release.”

“I don’t have to specify which officer handled it. New Brunswick Police Department handled it,” Miller told the City Council in response to questions about the case.  “I have undercover officers who I’m not going to identify.”

State law says that the “information as to the identity of the investigating and arresting personnel and agency [shall be available to the public within 24 hours or as soon as practicable].”

But it’s not just New Brunswick that has experienced a cutback in transparency.  Just a few years ago, videos from a police pursuit anywhere in New Jersey would likely be available to members of the public upon requests.

And even if police didn’t want to share the videos with the public, their radio transmissions, which can reveal a lot, were archived online by third parties and available to the public until this January, when the NBPD began encrypting their radio communications.

Now, it’s apparently challenge just to get the NBPD to admit whether or not a pursuit even occurred at all.

Pressed by New Brunswick Today about whether there was a “high-speed chase,” Miller said he did not know at the August 17 Council meeting.

It’s not an insignificant question, given that the department has specific policies about how to conduct vehicle pursuits, and has gotten into multiple crashes while engaging in them. 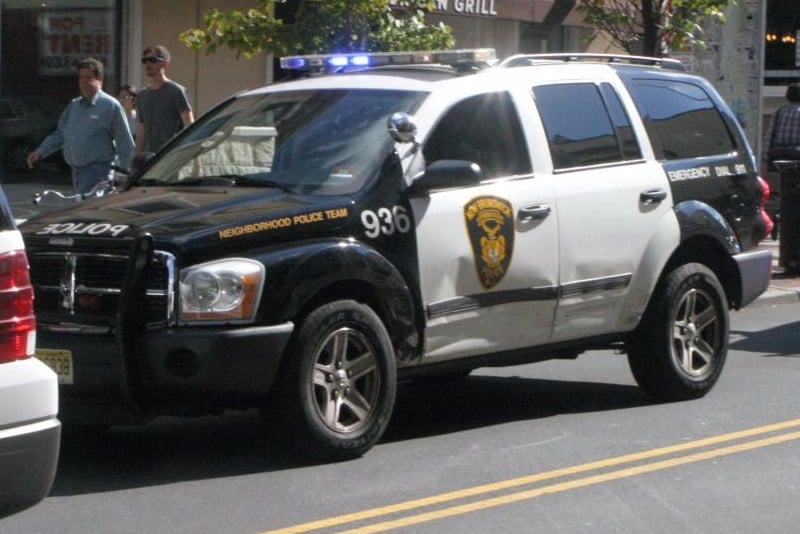 As we reported on October 17, 2014, two different police vehicles were damaged while officers were being told to end their pursuit as it entered the city’s busy downtown:

Then, the police radio communications become unintelligible, as officers involved in the crash step on one another’s messages while another says “break that off,” repeatedly. New Brunswick Police typically suspend or “break off” police pursuits while suspect vehicles traverse the heart of downtown.

The issues of transparency and NBPD pursuits intersected just two months later, when an activist filed an OPRA request with Middlesex County Prosecutor’s Office (MCPO) seeking more than a decade’s worth of videos from NBPD’s vehicle pursuits.

But the county government asked Francis to reconsider his decision after a higher court made an unrelated ruling that shattered the public’s right to police videos, Francis overturned his own decision.

That ruling, known as the Lyndhurst case, dealt a major blow to police transparency in New Jersey, just as the state’s top law enforcement officials were pushing for the adoption of body-worn cameras.

But the controversial Lyndhurst decision, and another more recent one that runs counter to it, will soon be considered by the state’s highest court.