NEW BRUNSWICK, NJ–Pokémon Go is the free "augmented reality" mobile phone game that has taken the country by storm, bringing its millions of users outdoors all over the U.S.

The game currently consists of the Pokémon from "generation one," the same critters featured in some of the games today's young aduts remember from their youth. The main goal remains, quite simply, to catch them all!

Businesses have been taking advantage of their locations, if they happen to be a "Pokéstop" or a "gym," and even buying "lures" in order to attract more Pokémon, which will in turn attract more players. During its final weeks open under its longtime owners, Tumulty's Pub on George Street took advantage of its designation as a "Pokéstop," buying lures in order to draw in customers.

Other restaurants, such as Catherine Lombardi's, have advertised discounts to members of the team who currently own the local "gym," and have posted pictures of rare Pokémon found near them on social media to attract customers. Once a Pokémon appears, the phone's camera offers a view of the virtual creatures superimposed on the real world.

Using a bit of skill, users must then swipe up on the screen in order to launch a "Pokéball" to capture their target.

Don't worry if you miss: You can always look around for your unsucessful Pokéballs on the ground.  However, there may only be a few opportunities to catch the Pokémon before it runs away.

According to Forbes, the success of the game has sent Nintendo's stock soaring with market value gains reaching $7.5 billion. After one week, the game was generating nearly $2 million dollars daily in revenue.  It officially surpassed Candy Crush's record of 20 million users, becoming the most popular mobile app in U.S. history.

The game's developer, Niantic, also admits "heavy battery use" has been a problem, stating, "Some devices may experience battery drain while playing Pokémon Go for prolonged periods of time. We are working on a solution." 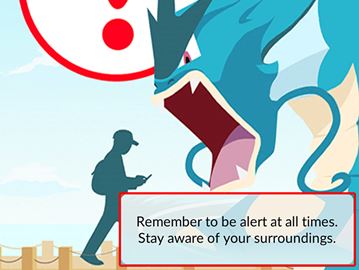 When opening the game, a friendly warning is displayed, cautioning players, "Stay aware of your surroundings."

In O'Fallon, Missouri, police reported teenagers allegedly using the game to steal users' smart phones. They used the geolocation feature to draw them into specific areas with the promise of Pokémon.

According to NJ.com's Craig McCarthy, a West Orange man has filed a federal lawsuit against Nintendo, Niantic, and the Pokémon Company alleging that the game has encouraged millions of gamers to trespass, or otherwise prevent property owner from enjoying their land

"At least five gamers also knocked on Marder's door asking for permission to catch Pokemon in the homeowner's backyard," according to the report.