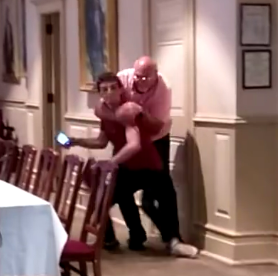 VIDEO: Before RU Board Votes to Raise Tuition, The Sound Guy Manhandles a Student Activist

NEW BRUNSWICK, NJ—In a disturbing display of physical aggression by a Rutgers University staff electrician, a grown man ran towards a college student, grabbing him and wrapping his arm around the student's neck at the school's Board of Governors meeting on July 20.

Just minutes after the board started its public meeting at 1:30pm in Winants Hall, as they usually do, they immediately voted to enter a closed-door "executive session" held in a nearby conference room.

What happened next was astonishing, as the man in charge of the sound system for the board meeting proceeded to chase and then physically assault Gibson in a bizarre scene captured on video by the school's student newspaper, The Daily Targum.

The perpetrator was a Rutgers electrician who goes by the first name "Russ."  As the video begins, Russ is shown following the much-smaller Gibson as Gibson leafs through the binder.

"I'm not going to tell you twice," Russ says, just seconds before running towards Gibson and putting him in what appears to be a headlock.

"How many times I gotta tell ya?  Three times already, right?" Russ shouted at Gibson, with his arm wrapped around the activist's neck.

The Targum's Nikhilesh De broke the story, quoting Gibson as saying, "I was attempting to figure out what my tuition would be in the upcoming year."

Even after the story and video were published, Russ was overheard joking about the incident with an official from the Rutgers University Foundation while Russ packed up the school's audio equipment.

"I'm in enough trouble already," Russ said, declining to give his last name to this reporter.

Rutgers University police officers removed Gibson from the room, according to De's reporting, and was unable to witness the board's vote to increase tuition 1.7%.

The Rutgers University Police Department (RUPD) and the University's media relations department have not responded to multiple inquries from NBToday about the incident.

The RUPD's online crime log shows that they are indeed investigating "Harrassment" and "Improper Behavior/Disorderly Conduct" as a result of an incident at 1:34pm in Winants Hall.  But it's not totally clear who the police consider to be the perpetrator of the alleged crimes being investigated.

It's not the first time that a civilian employee of the university has inappropriately put their hands on someone.

Melillo, who was 27 at the time, still serves as the Director of the President's Office.  Because there was no clear video showing the assault, RUPD detectives decided not to file charges in August 2015.

That scandal also cost the school's Athletic Director his job, and President Barchi nearly resigned himself.

The latest incident at the BoG meeting comes on the heels of news that one of the baseball team's top pitchers is being sued by the team's former manager, who said the university did almost nothing after he was assaulted by the drunken athlete inside a dormitory.

The unfortunate incident overshadows what turned out to be the lowest tuition hike since 2011, the same year that massive student protests led the Board of Governors (BoG) to cut the administration's proposed tuition increase in half.

The current student representative co-authored an open letter in support of NJ Assembly bill A2134, which would add two student voting members to the board "to be elected by the students of the university" to two-year terms.

It's not clear what material in the binders, if any, was confidential or "sensitive," as Rutgers public relations office has alluded to.

"This incident is an unfortuante consequence of building tension between students and the administration," concluded the letter.  "The remedy is a vote on the Board of Governors."