NEW BRUNSWICK, NJ—On June 25, more than 100 community members marched in solidarity with the people of one of Mexico’s poorest states, Oaxaca, following a deadly police crackdown, the latest conflict between the federal government and the state’s teachers.

Teresa Vivar, the leader of Lazos America Unida and one of the march’s organziers, said she is concerned for the people of Oaxaca, which is her homeland, and that of many other New Brunswickers.

“We are worried about the safety of the people,” said Vivar, adding that her organization is concerned that “the poor people will suffer the consequences” of continued violent clashes between union protesters and heavily-armed police. 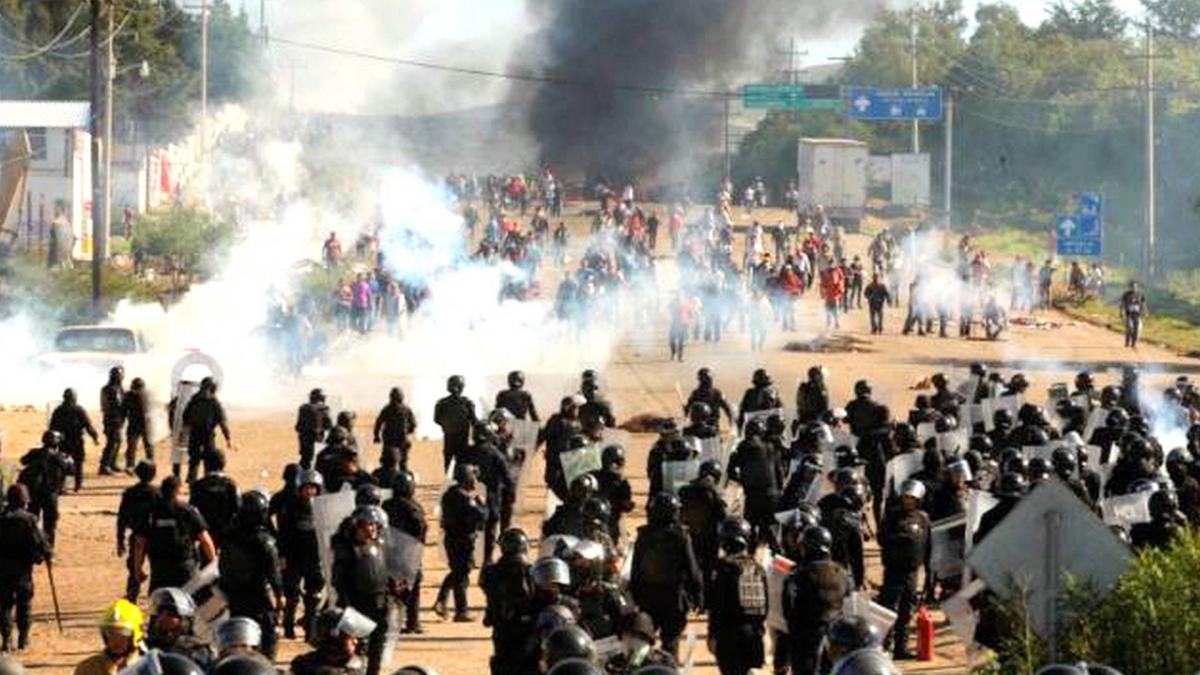 A bloody battle on June 19 claimed the lives of ten people in Oaxaca, after federal and state police attacked protesters with gunfire, leaving more than 100 injured, at least 21 arrested, and even more people “disappeared.”

The violent conflict began when some 800 police officers descended on a highway blockade composed of teachers and their supporters in the small town.

But police in riot gear being violent towards protesters was nothing new for the residents of Oaxaca.  Just a week earlier, on June 11, a similar army of police engaged in a violent late-night attack on protesters who had blockaded the entrance to the controversial State Institute of Public Education (IEEPO).

Tensions were already reaching their boiling point that weekend, when the top two leaders of the Oaxacan teachers’ union were arrested on criminal charges by the federal government.

In response to the arrests and police violence, the union quickly organized 18 massive protests to block highways, calling for the men to be freed, and opposing the Mexican President’s “neoliberal reforms,” which critics have alleged amount to the “privatization of public eduction.”

At first the government denied having anything to do with the fatal crackdown, even going so far as to say the police there were not armed with guns. 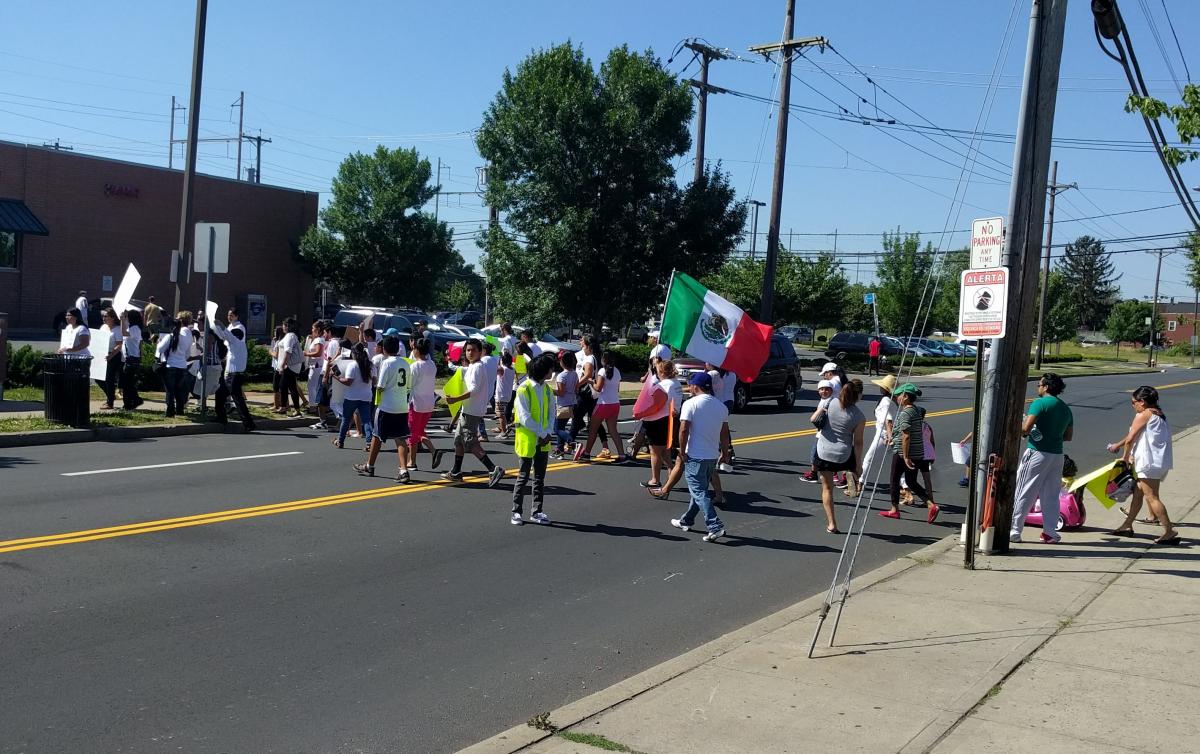 Dubbed “Parque Oaxaca” by the local immigrant community, the park is a gathering place for day laborers looking for jobs at the busy intersection of three major roads: French Street, Handy Street, and Jersey Avenue.

Though the city-owned park was established to honor veterans of the First World War, this gathering honored and mourned the loss of a different group who lost their lives in battle: those who died in the police violence in the small Oaxacan town of Nochixtlán.

The recent violence has sparked demostrations of solidarity across Mexico, as well as an many American communities like Chicago, New York City, California, and now, Central New Jersey. 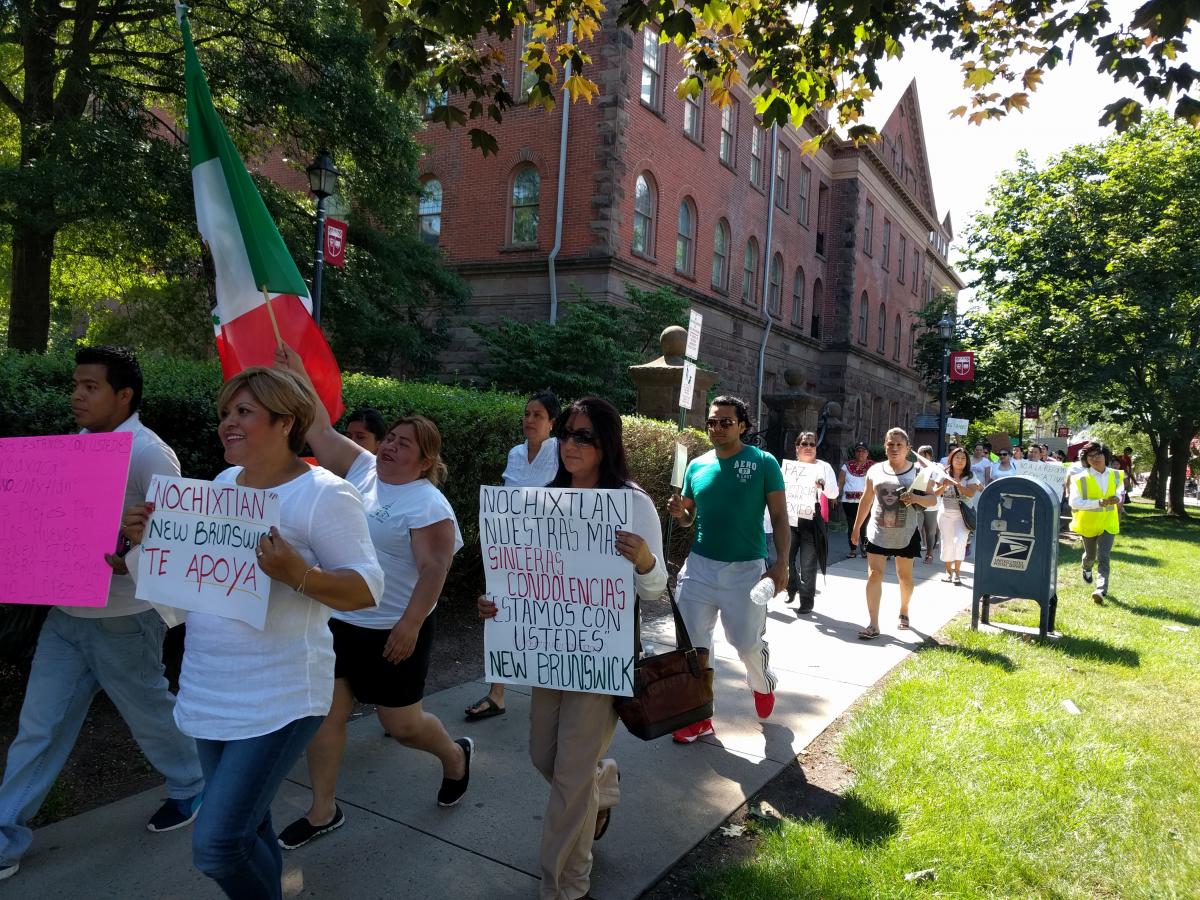 In New Brunswick, the march to the church was orderly and largely silent, out of respect for the people who died at the hands of the Mexican government.

Demonstrators carried Spanish and English signs, some criticizing the Mexican President, and others expressing support for the Oaxacan teachers.

“Paz y Justicia para Mexico,” read one sign, which translates to, “Peace and Justice for Mexico”

“Todos somos Oaxaca,” read another, simply translated: “We are all Oaxaca.”

Though the march quietly traversed French Street–the heart of the city’s immigrant community–the reception the marchers recieved at the Second Reformed Church on College Avenue was anything but silent. 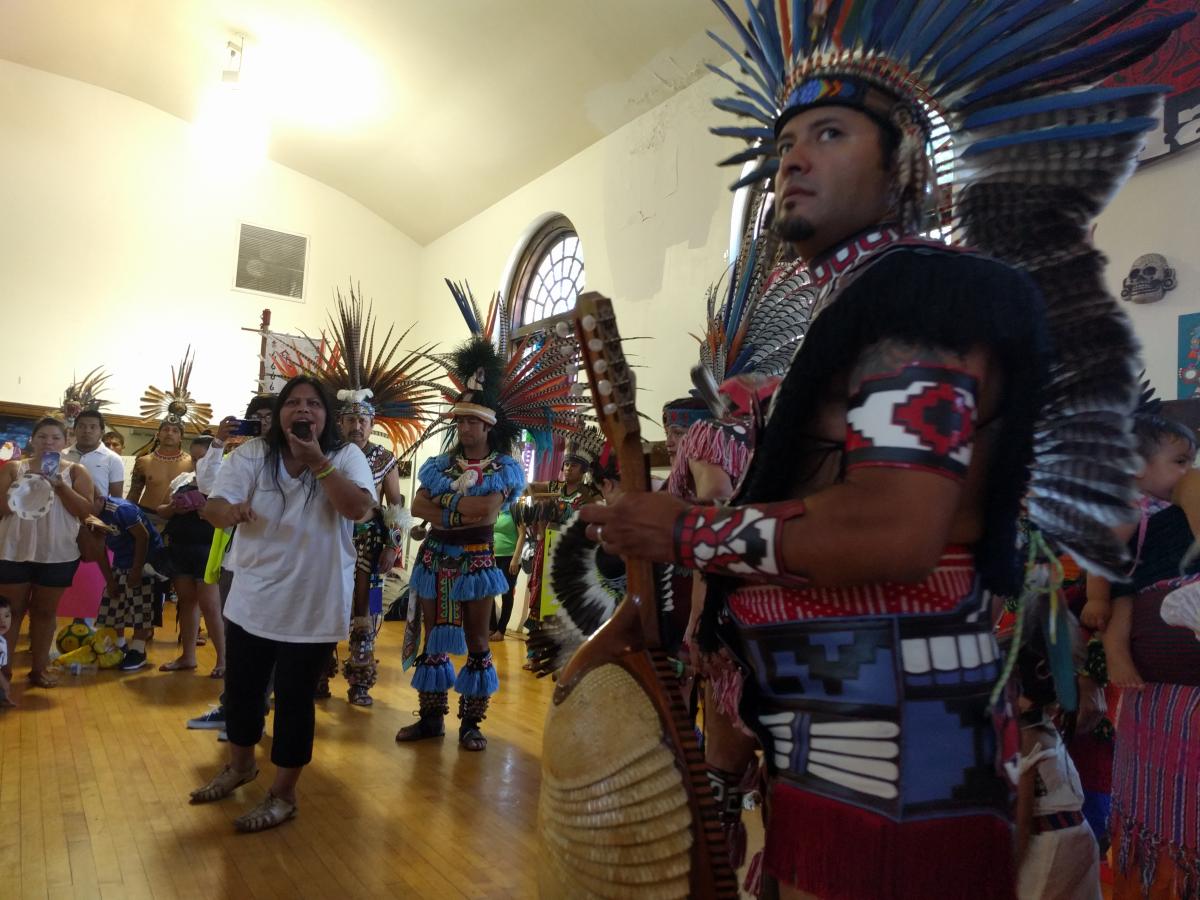 There, protesters they were met by more than 50 costumed members of Kalpulli Huehuetlahtolli, a spiritual and cultural dance group that seeks to “preserve indigenous ways of life… from ancient Mexico.”

The group blessed each protester on their way into the church gymnasium, and performed an impressive traditional dance ceremony that lasted more than two hours.

The names of the deceased were read aloud, and the church’s pastor, Douglas Shepler, briefly addressed the crowd in Spanish, after being blessed himself.

Those in attendance donated over $500 to send to help the people of Oaxaca buy medicine and food. 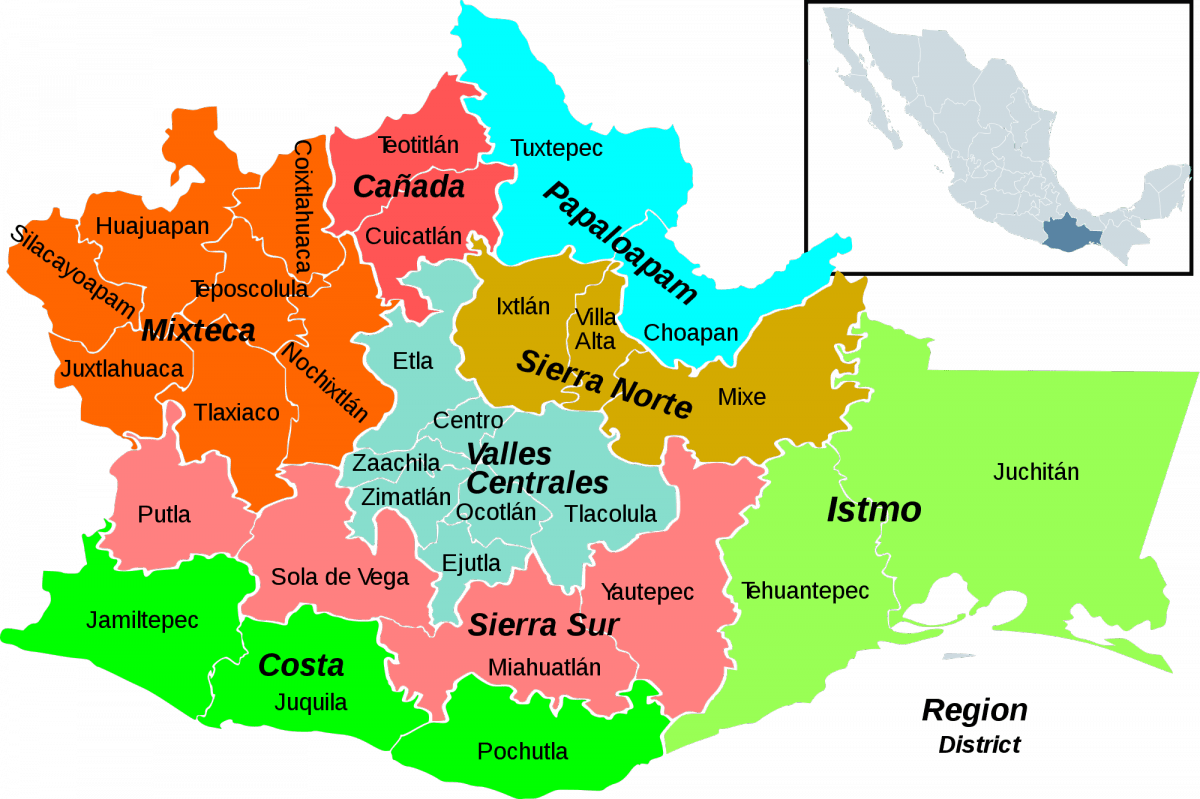 The Mexican state suffers from poor infrastructure, crime, and poverty, moreso than the rest of the country.  But it also stands out from the other 30 Mexican states for its diversity and culture, with more than a million residents that speak one of more than a dozen indigenous languages.

“Oaxaca’s rugged topography has played a significant role in giving rise to its amazing cultural diversity,” reads a report published by the Houston Institute of Culture, going on to explain why:

Because individual towns and tribal groups lived in isolation from each other for long periods of time, the subsequent seclusion allowed sixteen ethnolinguistic groups to maintain their individual languages, customs and ancestral traditions intact well into the colonial era and ­ to some extent ­to the present day. For this reason, Oaxaca is ­by and large ­the most ethnically complex of Mexico’s thirty-one states.

The area’s diversity is also what can make the job of Oaxacan teachers so difficult, and part of what has led their union to push back against Mexican President Enrique Peña Nieto’s one-size-fits-all approach to education.

National Coordination of Education Workers (CNTE) “Sección 22,” the union responsible for the blockade protests, has long been one of the most aggressive voices for education “reform,” but not the kind proposed by Peña-Nieto.

The union has been at odds with federal education efforts for more than a decade, insisting that the government’s priorities are out of touch with the reality on the ground in Oaxaca.

During 2006, as the CNTE occupied of a public square in the capital city during an epic seven-month strike.  But police came in full force to bust it up, and like the recent battle over the highway in Nochixtlán, the crackdown proved to be fatal.

In the government-sponsored attack on June 14, 2006–nearly ten years to the day before the most recent violence–helicopters dropped tear gas on the union’s protesters. 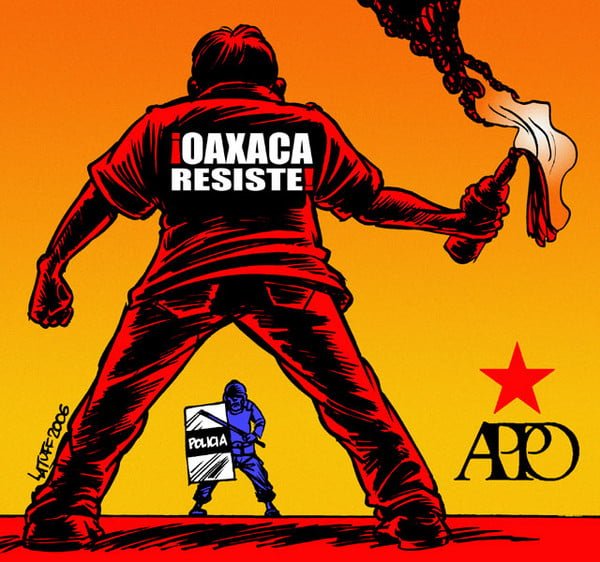 The episode only resulted in their uprising becoming more popular, with the much of the capital city coming out to support the teachers, and an organized group of local residents known as APPO taking control of the area and pushing the police out.

It wasn’t until October of that year that authorities re-took the city of Oaxaca, and by that point, the ongoing conflict had left at least seventeen people dead.

Since the 2006 fiasco, still deeply etched in the memories of most Oaxacans –and some New Brunswickers–the international media has taken note of the continuing struggle over education in Oaxaca, as documented in this 2013 New York Times article:

Oaxaca is 500 kilometers from Mexico City, yet the real distance is much bigger. The state’s G.N.P. per capita is one-quarter the average for the country. Oaxaca ranks second-to-last among all states in infrastructure. More than half its population lives in towns of fewer than 2,500 people.

Being a teacher in Oaxaca means sometimes having to travel for an entire day to reach your school in a tiny community, teach for three days — to children of all grades — and travel back home for the weekend. It means having to deal with children who speak more than 20 different dialects.

Being a teacher in Oaxaca means operating in a different universe — and under different rules.

Even though Oaxaca’s unpopular Governor Ulises Ruiz Ortiz–the man blamed for the 2006 crackdown–left office in 2010, the state’s teachers still can’t help but feel at odds with the direction the federal government is attempting to push their education system. 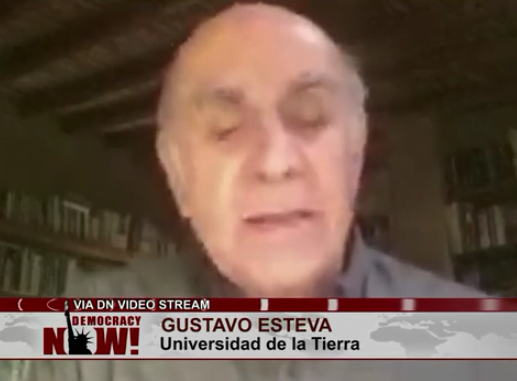 Goverment attacks on Oaxacan teachers–and the state’s unique school system–have become a regular occurence as the line between criminals and government institutions has become blurred, said Gustavo Esteva, a prominent author and founder of a university in Oaxaca, in a recent interview on independent radio’s Democracy Now!

“We cannot draw a line separating clearly the world of crime and the world of the institutions. It is the same thing for us,” said Esteva. “We are living in that kind of conditions. It is not the criminal assaulting… or killing the people; it is the authorities mixed with criminals.”

In the intervening ten years since the 2006 uprising, despite the election of a new President and new Governor for Oaxaca, corruption has been prevalent in many aspects of government, with more than 100 of the country’s local Mayors killed by hitmen, and alleged collaboration between police and criminal organizations. 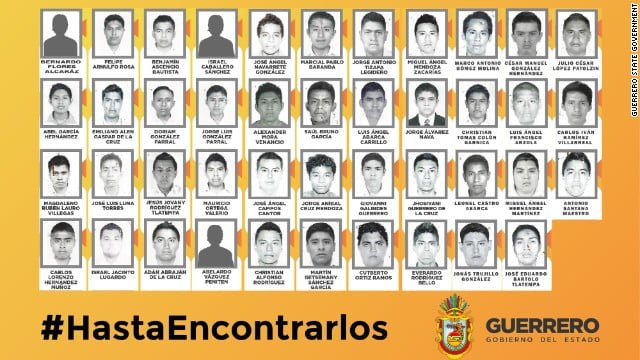 In September 2014, in the neighboring state of Guerrero, a bus filled with 43 teachers in training disappeared in a suspicious incident that still has not been fully explained.

According to the New York Times, the government’s explanation was found to be implausible, and the government inexplicably has turned down repeated requests to let outside investigators interview military personnel stationed near the site of the disappearance.

Esteva said that the disappearance of the 43 students from Ayotzinapa Rural Teachers’ College was “of course connected” to the recent conflicts in Oaxaca.

“This is a very complex war… against us, against our territory,” said Esteva. “The battle has just started.”

But  the conflict is also just the latest flare-up in a knock-down, drag-out fight between Sección 22 and the federal government, with mass protests or strikes becoming an annual tradition long before the 2006 debacle.

The Mexican government has most recently drawn the ire of the union for proposed “reforms” that stand to destroy some Oaxaca’s system of schools for teachers.  These schools, known as “normales,” or “normal schools” in English, train teachers how to handle the tall order of teaching the state’s diverse student body.

Critics call the supposed reforms “capitalist” and have suggested that the existing system of free education is at risk.

Not unlike the “education reform” policies of New Jersey’s Governor Chris Christie, critics have panned them as a subtly-disguised attack on the labor unions representing teachers, and argued that they will have a disproportionate, negative affect on the poorest communities.

“The education reform is better understood as an attack on labor. Much like the discourse of recent education reform movements in the United States, the Mexican reformers invoke notions of ‘accountability’ and ‘quality’ instruction,” reads a recent report in Jacobin Magazine.

President Peña Nieto recently implemented standardized testing for teachers, and used the militarized federal police force to secure testing sites.  But even more controversial in Oaxaca are his plans to put an end to the region’s existing system of normal schools.

Perhaps not a coincidence, normales also train teachers how to organize and protest in support of their students, and in defense of their own jobs.