NEW BRUNSWICK, NJ—Police detectives are investigating a shooting that took place on June 5 on Harvey Street, but won’t say if it’s connected to another targeted shooting that occurred nearly six months prior on the same block.

A reliable source told New Brunswick Today it was an ongoing intra-family dispute that led to the shooting, the same beef behind another shooting at the same spot, near the corner with French Street, on Christmas night.

But police were mum about any connection to any crime, and did not notify the public of the violent incident.

Both shootings occurred at approximately the same time, 12:15am, and again left a city resident with non-life-threatening injuries.

Only this time the shooter did not hit his intended target: He hit the target’s brother, said our source.

It all stems from an August 2 incident where 28-year-old Brian Powell, Jr. was stabbed in the back and the abdomen.

Our source said that both shootings were attempts to get back at 21-year-old Lamar Boyd, Powell’s cousin, who was arrested by New Brunswick Police Department (NBPD) for his role in the stabbing.

“The preliminary police investigation suggests an ongoing family dispute led to the fight and subsequent injuries,” read the NBPD press release issued after NBToday asked about the stabbing.  “When arrested, Lamar Boyd was found to have blood on his clothing and a knife was recovered nearby.”

“In this incident the victim… reported that while he was walking on Harvey Street a car pulled alongside him and the passenger called out to him,” read a crime alert issued by the Rutgers University Police Department (RUPD).

“The passenger then exited the vehicle and chased the victim while firing a handgun at him,” the alert coninues. “The perpetrator then fled towards Somerset Street.”

Unlike the stabbing, police did not issue a press release related to the shooting, but NBT documented it 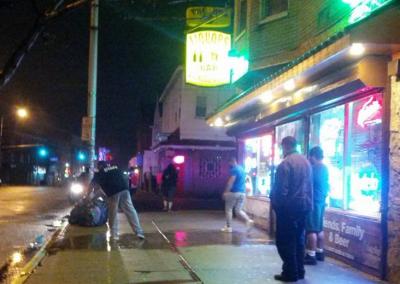 “The victim ran in the side door of Hub Liquors, a bar that more closely resembles a liquor store, leaving a trail of blood and forcing the establishment to close early,” reported this newspaper at the time.

In the December 26 incident, police did not identify the victim who was shot in the lower leg and hospitalized, or acknowledge any connection to the August 2 stabbing.

This time around, police again did not issue a press release, but responded to some of our questions by identifying the victim of the shooting as 25-year-old Larry Boyd.

The NBPD did not answer questions about the potential connection between the two shootings, or whether or not it was related to an arrest observed at the same corner about 21 hours later.

“Mr. Boyd indicated that the suspect shooter shot at him from across the street and fled in a gold Nissan,” said NBPD Captain JT Miller, who indicated Boyd “was shot one time in the upper portion of his arm.”

“Mr. Boyd told detectives that he knows who shot him but he was not willing to cooperate with the police at this time,” said Miller.

Last time shots rang out in the ongoing dispute, RUPD issued a crime alert to its campus community, because Harvey Street is located in the Fifth Ward of New Brunswick.

So far, RUPD has not issued a crime alert for the most recent incident, despite the University’s pledge to alert students to all “serious” crimes it learns about within the Fifth and Sixth Wards of New Brunswick, which are home to the school’s flagship campus.