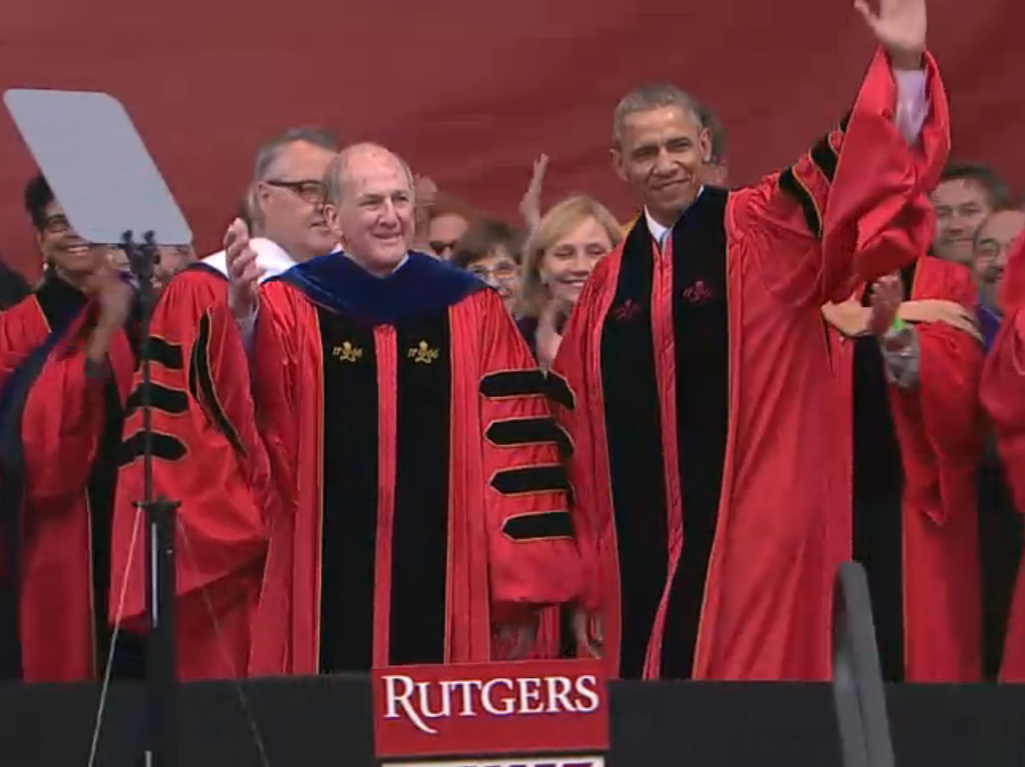 PISCATAWAY, NJ—When President Barack Obama visited Rutgers University on May 15 to address this year's graduating senior class, he re-ignited a divisive debate related to the graudation ceremony held in 2014.

Two years before Obama found himself on the banks of the old Raritan, a group of student, faculty, and community activists railed against the school's administration for hiring former Secretary of State Condoleezza Rice to give that year's graduation speech.

The protesters had hoped to convince Rutgers to rescind the invitation, which had been quietly made without the involvement of the school's faculty, whose opinions were normally taken into consideration.

They held teach-ins to educate students about the issue, protested at public events where they knew the school's President would be, and stormed the school's administration building during a six-hour sit-in.

While Rutgers did not budge, Rice herself ultimately pulled out of the speaking engagement, saying she did not want to be a "distraction."

But, two years later, with Obama giving one of his final commencement addresses as President, he effectively took the administration's side in the knock-down, drag-out fight.

Obama used the speech to take aim at Rice's critics who pressured the school, or as he referred to them, "some folks on this campus [who] got upset that Condoleezza Rice was supposed to speak at a commencement."

"The notion that this community or the country would be better served by not hearing from a former Secretary of State, or shutting out what she had to say — I believe that’s misguided," said Obama.

"I don't think that's how democracy works best, when we're not even willing to listen to each other."

The remarks, which came among several non-controversial references to Rutgers culture, including shout-outs to the "fat sandwich," Olde Queens Tavern, and the "EE" bus route, rubbed some recent alumni the wrong way.

According to Obama's logic, students ought to "be committed to participating not just if you get immediate gratification, but you got to be a citizen full-time, all the time."

And, according to the President, "participation… means listening to those who don't agree with you."

"If you disagree with somebody, bring them in and ask them tough questions. Hold their feet to the fire," Obama continued.  "Make them defend their positions.  If somebody has got a bad or offensive idea, prove it wrong. Engage it. Debate it. Stand up for what you believe in."

"Don't be scared to take somebody on," the President advised, somewhat ironically.  "Go at them if they’re not making any sense. Use your logic and reason and words."

Sherif Ibrahim, one of the leaders of the anti-Rice protests, took Obama's advice, and used logical arguments to call into question the President's characterization of the 2014 debacle in a post on the popular Huffington Post website.

"A commencement speech provides no space for direct, democratic engagement," argued Ibrahim.  "The speaker arrives, receives an honorary degree, delivers their remarks, and leaves. There is no room for free speech since the event is one-directional."

If anyone knows this, it would be Obama, who has annually spoken at multiple graduation ceremonies over the past eight years, and has never taken any "tough questions" from the audience in connection with those speeches.

"The speaker delivers their remarks, the crowd listens, and that is all," argued Ibrahim.  "Had Dr. Rice delivered the speech this would’ve been the case."

Abbas penned an "open letter" to Obama following his remarks, thanking him for mentioning their efforts but criticizing the President's approach.

"Either your advisors were oblivious to the facts on the ground or your speechwriters were deliberately obfuscating history," Abbas wrote.

Two years ago, Rice's opponents called her a "war criminal," and said the honor of addressing the graduating class, which typically comes with an honorary degree, was inappropriate for someone so intimately involved in the George W. Bush administration's decision to go to war with Iraq in 2003, and its efforts to spread misinformation about the dangers the tiny Middle Eastern country posed to America.

Calling the Iraq War "an ugly stain on on our nation's image," Abbas argued, "Rice was to be given an honorary doctorate, when her and the previous administration’s actions were nothing but dishonorable."

Contrary to what the school's official statements said, emails released under the state's Open Public Records Act showed the protesters were right.

"Our speaker is Condoleezza Rice! But please don't tell anyone," wrote one official on November 5, 2013. "We won't release her name until February or April."

"[Rice] is good friends with Greg Brown so he gets all the credit for securing her to us."

It's possible that Obama may not have ever spoken at Rutgers, but for the controversy over Rice.

Obama credited the Rutgers community with undertaking a campaign to convince him to speak at the 2016 ceremony, as part of the ongoing celebration of the school's upcoming 250th anniversary.

That campaign first started to pick up steam as the school tried to move on from the 2014 fiasco, which also saw university officials disrespect one of the school's most popular and inspirational figures in the aftermath of Rice's withdrawal.

With just over a month left to go before this year's graduation, Rutgers Board of Governors named journalist Bill Moyers the commencement speaker, much to the chagrin of those who had campaigned for Obama.