Oakland, California, which took the number one spot, was one of the only six United States cities, ahead of New Jersey.

In fact, the Garden State made the “Top 10 Global Logistics Hubs by Prime Rent Growth,” and commanded rents yielding a 15% year-over-year gain, per square foot, per year.

It’s not by chance that, last month, Amazon.com Inc. said it plans to open another two “fulfillment centers” and chose New Jersey once again.

One new center will be located in Carteret, and the other will be in South Jersey’s Burlington County, in Florence. On May 18, Amazon said both facilities are expected to open this fall and create as many as 2,000 full-time jobs (Amazon says it currently employs 5,500 full-time).

“This new fulfillment center, the second in Carteret, will be more than 800,000 square-feet and employ more than 1,500 full-time associates,” said Amazon of the additional Middlesex County center.

Jobs at the new distribution centers have not yet been posted, but are expected to appear on workatamazonfulfillment.com in coming months.

Amazon’s largest center in the state is 1.2 million square feet; its in Robbinsville, a town in Mercer County, about 35-minutes from Hub City.

“That is prompting traditional retailers, e-commerce companies and third-party logistics firms to seek out advanced ‘prime’ logistics warehouses to modernize their supply chains and thus facilitate the rapid delivery of goods.”

As more people shift to online shopping, strip centers and malls in New Jersey are changing.

For one thing, signs advertising stores for rent are widespread in virtually all shopping centers in Central Jersey towns like East Brunswick and Franklin, while so-called “lifestyle businesses” including gym franchises, kickboxing franchises, a franchise offering in-studio painting classes, and food franchises seem to be opening-shop rapidly.

While area stores like Sports Authority, which announced May 20 it will shutter all stores and begin going-out-of-business sales on Memorial Day, Eastern Mountain Sports, which filed for bankruptcy last month, and the Office Depot in Somerset wind down liquidation sales, the amount of available square feet represented by vacant retail stores is growing.

A&P’s recent bankruptcy has also added available retail space. In East Brunswick, the 33,000 square-foot store that once housed a Pathmark is available for about $16 and up, per square foot 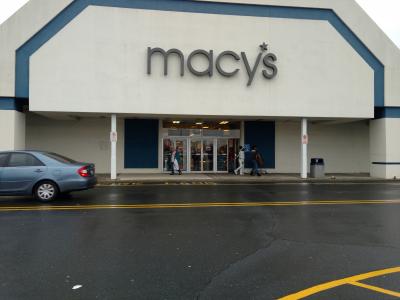 One popular new food franchise, which opened right next door to a Chipotle, has gotten off to a big start.

“Halal Guys” opened its first East Coast location outside of New York City, in the Toys R Us shopping Center on Route 18 South in East Brunswick.

Aside from locals, the franchise is drawing fans from Edison, Woodbridge, and other towns, who’ve patronized the restaurant in New York City, want Halal food, and apparently don’t mind standing in line, at least right now, as the establishment just opened and people want to try it, to get served.

The owners chose the location for their initial Garden State unit because it is accessible from areas both North and South of East Brunswick, via Route 18. They also say many Edison Township residents who eat Halal foods are in close enough proximity.

“Eight- thousand cars pass [by here] every day. [In addition to] lots of ‘hard core’ fans in the neighborhood, we hope that students from Rutgers will stop here,” said Halal’s manager”

Rohan Paleja, 19, a resident of Piscataway, said he went to the new Halal because there was a lot of talk about it, and a bunch of his friends were going.

Asked how long he waited on line, he said 40-minutes. 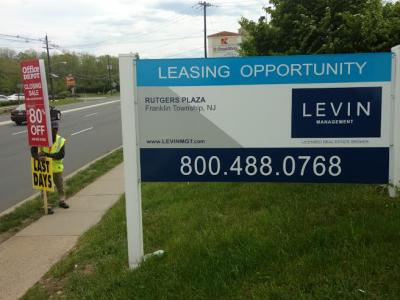 On Easton Avenue in Somerset a father-and-son duo is betting that the Crunch Fitness franchise they’ve invested in will leverage the current trend toward consumer spend on experiences rather than buying goods.

Right now their venture is operating from a temporary sign up center in Rutgers Plaza at the corner of Easton Avenue and John F. Kennedy Boulevard, while it builds-out a custom 24,000 square-foot facility next to the Office Depot in the center, which is closing the location for good. And there are several stores for rent in the plaza too, although the Radio Shack located next to a Game Stop is still plugging away.

“The club’s central location will provide a facility that is accessible to all residents seeking a top-of-the-line experience,” Eric Wahad, the younger of the two, said.

“Our goal is to bring a fun, friendly, affordable environment to the already active community of Somerset and its surrounding towns.”

In North Brunswick, on Route 1 South, a Crunch franchise owned by a different franchisee, Steve Viscardi, opened more than a year ago a few doors down from anchor, BJ’s Wholesale Club and Regal Cinemas at Commerce Center 18.

“We’re looking forward to opening our first location in New Jersey in a brand-new plaza, offering gym-goers more than 20,000 square feet of gym space to get their sweat on,” Viscardi said.

Viscardi also operates a Crunch in Woodbridge, at 789 St. Georges Avenue, which is reportedly a drop larger, at 25,000 square feet, than the crunch being built in Somerset. Both of his units opened in the middle of 2014.

“E-commerce demand is acute in the Americas, and rent in the U.S. is growing from a relatively low base given the abundance of developable land here,” said David Egan, CBRE’s head of industrial and logistics research in the Americas.

“Developers are building and delivering more logistics buildings, but that new supply can’t keep up with demand.” He added that industrial rents should continue to rise for a while.

“To get the goods to consumers fast, [retailers] have to get close to them,” he said.

“We place our fulfillment centers close to customers to provide the fastest possible delivery times, and this expansion in New Jersey is directly tied to our increasing customer demand,” said Akash Chauhan, Amazon’s vice president of North America fulfillment operations.

The other top ranking United States markets, according to CBRE’s report were: Inland Empire, Los Angeles-Orange County, Dallas-Fort Worth and Atlanta; another two high ranking cities for rent increases were in the Americas: Santiago, Chile, and Ciudad Juárez, Mexico.