The March 10 attack was captured on in a cell phone video provided to a Spanish-language TV station, and posted online by New Brunswick Today.

The attacker “knocked the victim to the floor in a high school corridor” in the words of the the Middlesex County Prosecutor’s Office (MCPO), then “repeatedly punched and kicked the victim, who sustained facial and dental injuries and a sprained collar bone.”

The attack lasted more than 20 seconds before a NBHS security guard ended it.

After journalists, angry parents, students, and community leaders started asking questions and protesting, district officials announced they terminated a security guard for a “lapse in judgment” related to the incident, and they promised “re-training” for the security staff.

Under a plea deal, the perpetrator pleaded guilty to “juvenile delinquency for conduct that if committed by an adult would constitute an aggravated assault upon the fellow student,” according to the official statement.

The attacker’s name is being withheld, presumably because he is a minor.  He was 16 years old when the attack occurred on March 10.

“In addition, he must pay restitution to the victim’s family, but the amount has yet to be determined by Superior Court Judge James Hyland,” reads the MCPO release. 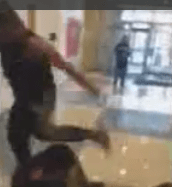 Unlike many victims of harassment and bullying, 15-year-old Oscar Aparicio stood up for himself after being attacked, with his family opening their home to news reporters, and community protesters applying pressure by demonstrating at meetings of the city’s controversial Board of Education.

Judge Hyland also placed the attacker “under house arrest and ordered him to report to the detention center on June 24 to begin serving his term.”

The MCPO announcement came on May 19, just over a week after the sentence was imposed on May 11, and more than two months after the attack took place.

According to Christopher Kuberiet, the MCPO’s 1st Assistant Prosecutor, the perpetrator will likely be one of less than 40 juveniles in the center, which is located next to the county’s Adult Correction Center in North Brunswick and serves Middlesex, Somerset and Mercer Counties.

“In a building which was designed to house 120 people, usually has less than 40 young people on any given basis,”  Kuberiet told a couple dozen people assembled at a police-community forum held on the Rutgers campus on May 18. “We have in fact utilized electronic monitoring and tried to develop alternatives to incarceration.”

“The goal of the juvenile justice system is to–consistent with the public interest–rehabilitate,” explained Kuberiet.  “We know when someone is incarcerated, the product that we get at the other side is not better.  If we can rehabilitate… that’s something we strive to do at the Middlesex County Prosecutor’s Office.”

In this case, however, the juvenile accused of this attack is going to be incarcerated, and Middlesex County’s juvenile center was not the only option for the sentence.

Aggravated assault is a second-degree crime punishable by a maximum term of three years in the New Jersey Training School for Boys in Jamesburg, according to the MCPO statement.

“However, the judge ruled the 60-day term may be served at the Middlesex County Juvenile Detention Center in North Brunswick.”