NEW BRUNSWICK, NJ—A tumultuous day for the city's Board of Education ended with more than 100 people attending their meeting, a rare occurence, and many more protesting out front of New Brunswick High School (NBHS).

At the March 15 meeting, Superintendent Aubrey Johnson reversed course and admitted that the district had parted ways with a security guard who failed to intervene in a violent beating that was captured on video in a New Brunswick High School hallway.

Originally, school officials had said that "protocols were followed" and made no mention of any personnel or policy changes as a result of the attack.

"We can say that protocols were followed and the safety and security of our students remains a top priority," said Johnson.

Johnson, who left an administrator job in Paterson's school district last summer to take over New Brunswick's troubled school system, saw his "honeymoon" period in the Hub City come to a swift end as controversy and criticism befell his administration.

Just a day after Johnson's "protocols were followed" statement, the Board of Education building was beseiged by protesters, including many who joined the even larger crowd at that evening's public board meeting.

The meeting quickly became a platform for officials and community members to speak about the disturbing incident.

"We will get through this, and this is not a stain on the New Brunswick public schools," Johnson insisted.

For the first time in the history of the city's Board of Education, a significant portion of their meeting was conducted in Spanish, with a bilingual board member translating much of what was said in both languages.

The board also deviated from its advertised agenda to allow Superintendent Johnson to speak first, followed by Board of Education President Patricia Sadowski, and then "Open Questions From The Public," which proved to be volatile.

Under pressure from the community members, Johnson admitted that a security guard had been let go as a result of the incident one day earlier.

"Yes, there may have been a lapse–Let me correct that: There was a lapse in judgment, in my opinion," said Johnson.  "And the security guard is no longer with the district as of yesterday."

Videos had shown someone who looked like a security guard keeping their distance as one student punched and kicked 15-year-old Oscar Aparicio, Jr. for more than 20 seconds.

The news of the security guard being let go drew applause from the residents, including many students and parents attending a board meeting for the first time.

But community members told the board the problem of violence in city schools was much bigger than any one incident.

Johnson promised one community member that the district's investigation would "look at everything," including other misconduct by security guards including accusations of "eating, talking, gossiping, and not really doing their job."

City police also made their involvement in the case public as public pressure mounted, announcing unspecified criminal charges against the attacker four days after the incident in a one-paragraph press release.

"The 16 year old male suspect was detained at the High School and was charged with assault related offenses," read the release which suggested "the motive behind the assault stemmed from an argument over a female student."

The district continued drawing heat from the public and the press, with a number of television and radio outlets questioning the administration as the board prepared for their most difficult meeting in recent memory. 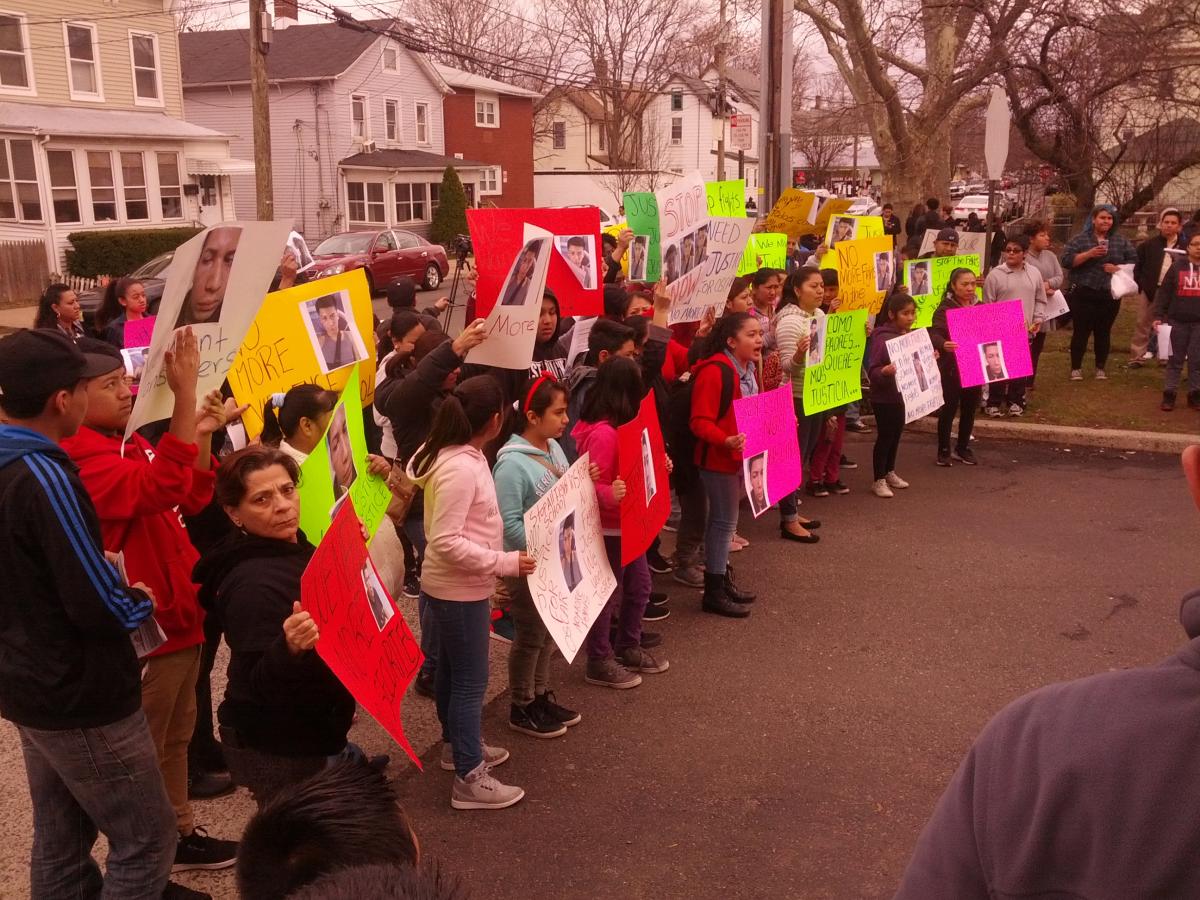 Emotions ran high during a protest that drew about 80 community members to the district's Baldwin Street headquarters at 4:30pm.

Protesters of all ages were holding signs, including some that read "DO YOUR JOB!!!!" and "Stop The Violence."  Others held signs with pictures of the victim that were taken after the attack.

They chanted and yelled in the direction of the BOE building, but were kept back by two security guards, who quickly became a sounding board for the protest.

"Today it's Oscar.  Next time it could be your kids!" one energetic young protestor shouted at the guards.

Just four minutes after the adverstised start of the protest, New Brunswick Public Schools issued its second official statement in as many days, this one specifically to "correct misinformation."

Even though the district had already terminated the security guard a full day earlier, the 4:34pm statement still maintained "all relevant protocols were followed," and laid out a timeline of events:

Based on our own security video footage, we know that:

During the protest, district officials escorted the parents of the victim into the building to speak with Johnson.

Johnson estimated that he spent about 40 minutes speaking with the parents, and that as a result of his discussion with them, that there were additional "things we may want to take a look at."

He also invited any parent to make a "surprise visit anytime… to take a tour of the school because I do believe NBHS is a safe place to be."

But community members, including the parents of the victim, pressed the board, and forced them to address difficult questions about the safety of its students.

Many speakers argued that this was not an isolated incident of violence, and that all of the district's schools face a severe problem that is not being properly addressed.

"The situation is not new," said Teresa Vivar a city resident who runs the organization Lazos America Unida.

"We had another incident yesterday," said one student who spoke up.  "Violence seems to be a trend."

The student said that he knew there were other students who were scared at NBHS and that "there should be bigger consequences" for violent behavior.

Other parents said their children had been forced to change schools because of repeated instances of bullying, and one parent alleged that a teacher threw a book at her child.

Many times the board's answer was simply "Thank you for your comments," and "it's all part of the investigation."

Though security guards were allegedly too slow to stop the vicious beating that sparked the outrage, they were quick to stop this reporter from videotaping a portion of the board's meeting in a blatant violation of the state's Open Public Meetings Act.

The guards repeatedly told individuals not to videotape or take photographs during the public meeting.  And at least one sworn law enforcement officer backed them up.

"It's was terrible what the security guards were trying to do to you in order to [stop] you from recording but unable to stop an assault [of] a kid!!!" said Vivar, who witnessed the harassment and intimidation as security guards nearly ejected this reporter for recording a video.

This reporter attempted to record a cellular phone video during the first of two shouting matches between longtime community advocate David Harris and the school board's attorney Peter Hendricks.

"The fact that we get to come together after a child has been brutalized without immediate action by the board tells us something about how the community is seen," Harris told the board.

This reporter held up his hands and promised the oppressive forces to cease all photography of the meeting.  At least one security guard still wanted this reporter removed, but cooler heads prevailed.

When this reporter took the microphone, he asked the board's attorney if it was legal to make audio and video recordings of the meeting. Hendricks, who was filling in for his brother George, responded that recording was allowed.

"Then can you please tell your security guards to back off!" exclaimed this reporter, garnering unexpected applause.

"Stand down, guys," ordered Patricia Sadowski, the Board of Education's President.

It wasn't the first time the school board and this media outlet, the state's only bilingual newspaper, clashed over freedom of the press.

In June 2014, security guards ordered people affiliated with this newspaper to stop distributing it to people attending a BOE meeting. The board's attorney backed up the guards at first, but later admitted that the Board of Education had "overreached" two days later.

Two months later, security guards who must not have read our article on the embarrassing debacle, again attempted to prevent the free distribution of a newspaper at a public meeting, but they backed off after this reporter spoke publicly and asked the board of education to advise their security guards they were violating the law.

For her part, Sadowski teared up when discussing the incident during her report at the top of the meeting.

"I hate when terrible things happen to a child… I did see the video and it hurt me," she told the crowd.

Sadowski, who is running for re-election this April, said that she told Johnson she wanted "no stone left unturned" in the investigation of the incident.

Sadowski promised the district would conduct a "root cause analysis" of the incident.

"We will have a plan when the investigation is done," said Sadowski.

She said the most disturbing part of the situation was that "fellow students stood there and took picures and didn't assist the victim."

"That goes against everything that I stood for and that this board stands for."

One member of the public challenged Sadowski on that point, arguing that "our kids are not security guards."

Sadowski responded by saying students witnessing violence should "find an adult, find another security guard, or yell," rather than standing by and recording the incident.

But after an hour of public comments, which took longer than usual to accomodate due to the translation process, the board was eager to end the public portion of the meeting and move on to other business.

Despite an attempt to move on to the next agenda item, a routine update from Facilities Committee Chair Ed Spencer, the crowd eventually shamed the board in two different languages, until Sadowski allowed three additional members of the community to speak.

The next Board of Education meeting is the public hearing on the district's budget, scheduled for Tuesday, March 22 at 7pm in the auditorium of NBHS.  The election for three of the nine seats on the BOE will be held on April 19.

It is not clear if the board will allow public comments or questions about issues other than the district's budget.