It was the play’s world premiere.

The play follows two pairs of freshman college roommates at a liberal arts college in the northeastern United States. One set is living in 2016, and the other pair of roommates live in 1964.

The roommates whose story is set in 2016 are Tanya (Wakeema Hollis) and Julie (Gillian Mariner Gordon). Julie is white and entirely clueless about black culture. Tanya is black and struggling with her racial identity.

The characters living in 1964 are Aaron (Andrew Manning), who is among the first black students at the college, and Michael (Matt Maretz), the white roommate who accepts Aaron, although his reasons for doing so turn out to be tricky.

“To me, the play is really about friendship, and what racial constraints and ideas about ientity do that friendship,” says Lents. “I’m interested in ways in which we’ve come really far and the ways we haven’t.”

College Colors gently approaches somber topics, from Tanya’s identity struggle to the abuse faced by Aaron at his college.. There were laughs in every scene, to the credit of both Lents and the actors.

However, there were subtle moments that hinted at the violent undercurrent of these upsetting but relatively innocuous scenes. As the play switched between 1964 to 2016, there were displays with blurry film snippets superimposed with colors. They contained footage of seminal moments in black history, like Martin Luther King, Jr. giving a speech and a person, presumably a protester, wearing an “I Can’t Breathe” t-shirt.

Another such moment is the scene where Aaron returns to his room after being kicked out of his orgo study group. His textbook is covered with scribbled racial slurs, including the n-word, but it’s not even mentioned. The abuse is shown as an undercurrent of  the political and cultural background.

One constant set design is Julie’s Janelle Monae, an African-American contempary singer, poster. It’s fairly ironic that Julie, who is entirely clueless about the black experience in America, is such a fan of an artist who is not only black but is seen as a political artist. It could be an interesting nod to the fact that white Americans engage in and capitalize off of black culture while being blind to the struggles faced by black Americans. 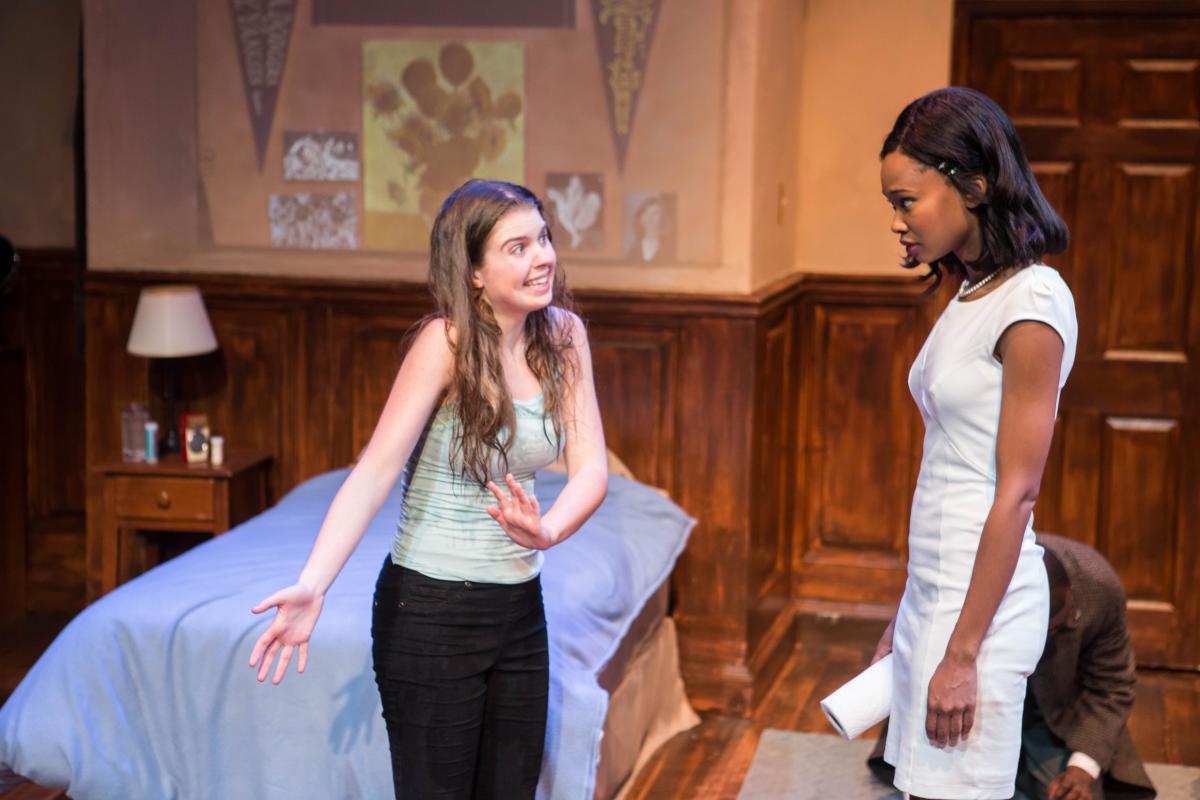 “It is my hope that plays like College Colors can serve as a starting point for healthy and productive dialogue,” says Jones.