NEW BRUNSWICK, NJ—The 13th Annual Big Chill, a charity 5k run/walk hosted by Rutgers Recreation, continues to be one of the most popular events of its kind in the state.

The December 5 race had 9,600 runners registered in total, an 8% increase over last year’s race, according to data from CompuScore, a race scoring and timing outfit.

The race is unique. There is no entry fee, but participants are asked to bring a new unwrapped toy to be given as holiday gifts to local children.

As the Executive Director of Recreation at RU, Diane Bonanno grew the race year after year from only a thousand participants in 2013, the first year the race was run, but she retired last December.

“She created [the Big Chill]. Every year it grew and changed,” said Race Director Anne Finetto, on December 4, the night before the race.

“There is so much information she had stuffed in her mind that we don’t have.”

The first of two opportunities to register in person was from 2-6 pm on December 4 and people were trickling into the College Avenue gym to either drop off toys and complete registrations, or register if they didn’t do so online, by November 30, when it closed at 8,889.

“Everything seems to be going smoothly,” Finetto told New Brunswick Today, during a break from being out on the gym floor supervising.

By the end of Friday evening, the night before the event, 660 people registered in person, CompuScore told NBToday, while another 400 registered on race day.

“No shows” for races like this typically average about 10%, but could skew higher if the weather is bad.  As the name indicates, participants can usually expect a chilly morning.

Knowing that number could help to further reduce costs in the future, and allow for more money to go to charity.

But the weather was quite cooperative on race day, bringing sunny-clear skies, moderate temperatures and crowds of participants to the College Avenue Gym. 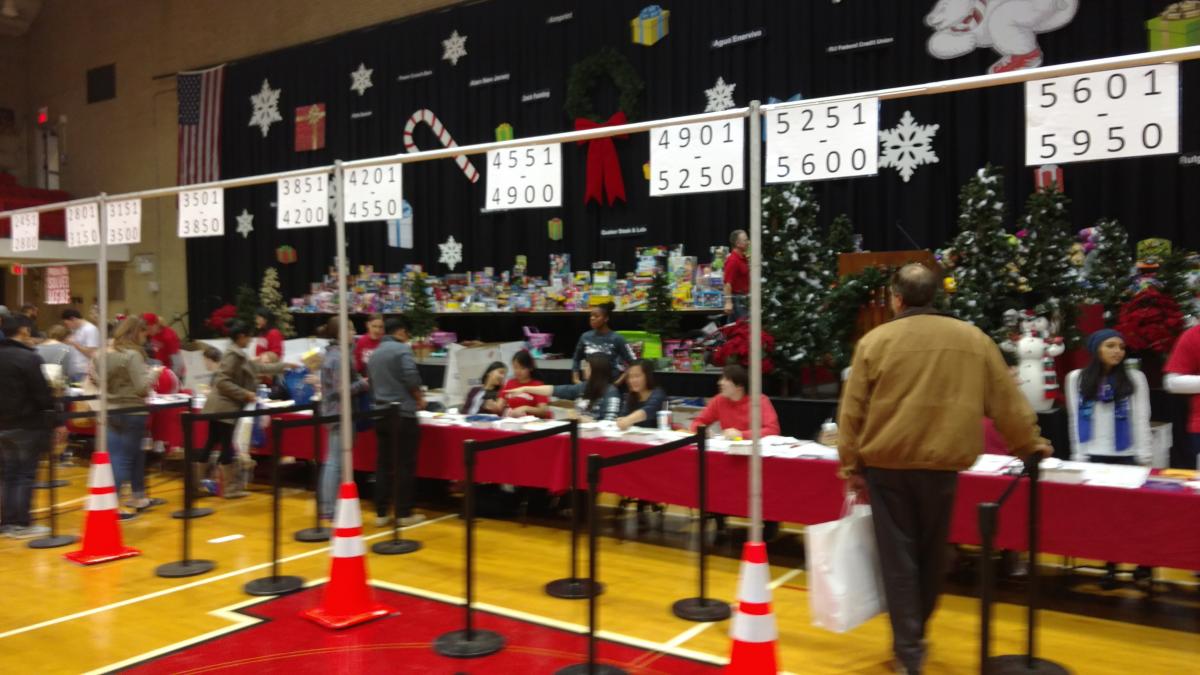 Inside the gym, the unwrapped toys were stacked high, waiting to be donated to local charities.

“It’s really a collaboration of people that make this happen. We have a variety of us working as a team,” said Finetto, adding that her team had implemented a plan to track the number of no shows this year, for the first time ever.

Kapp said that the area is lucky to have a charity race that is able to accommodate so many people.

“You know if it were in another area it would be different,” she said.

Both Finetto and Kapp spoke about not wanting to make any immediate changes that could cause a potential backlash, in Bonanno’s absence.

“We really want to run it as close as possible to last year, without making any significant changes,” said Kapp.

However, they explained one goal was “to be a little bit more cautious about… spending.”

“We’d rather give the money to the charity,” said Kapp.

For example, in past years Bonanno had offered those who dropped off their toys and received their race bibs the night before the race a chance to win an iPad, at a raffle after the race.

“It was an incentive to encourage people to pick up [the day before], but because it’s a charity race we didn’t want to take away from the children,” Kapp said.

While competitive runners need an electronic timing chip to score or qualify for an age group award, and the race does draw some of NJ’s top runners, the cost of the chip is $3 each.

As in past years, when registering, everyone was reminded that requesting the chip would result in less money going directly to the charities.

In an email, received after registering online, everyone was asked to sign in and confirm that they did indeed still want the chip.

The reminders seemed to have worked: This year 500 fewer runners opted for chips – only 1,400, as compared to last year, when the amount of chips distributed was 1,900, according to CompuScore.

That change alone represents a direct savings of $1,500.

There were some team challenges in various categories as well: “Most Rutgers Spirited,” the winnner receiving Rutgers swag, “Silliest Photo,” to win a restaurant gift pack, and “Most Holiday Spirited,” to win a pizza party including up to 8 large plain pies and 20 drinks.

These prizes were all donated by various sponsors.  And the first place female and first place male finishers each won a pair of 2016 RU season football tickets.

Kapp explained that the donations for prizes, helped save money as well.

The Spring Lake Five Mile Run, an annual race held at the end of May to kick-off summer, is known to be the largest race in New Jersey, with more than 10,000 finishers this year.

But the increasing number of Big Chill registrants raises the question: Will it eventually become the largest race in the state, topping the longer, five-mile race?

The Big Chill has never turned away anyone who wants to register, although it doesn’t guarantee the free long-sleeve shirt to all, say race officials.