The Central Jersey Coalition Against Endless War hosted the rally on the corner of Raritan and Adelaide Avenues, replete with signs proclaiming contempt for racism.

Throughout the demonstraton, car horns honked in solidarity with the activists, as several played guitar and sang traditional resistance anthems like “We Shall Overcome” and “This Land Is Your Land.” 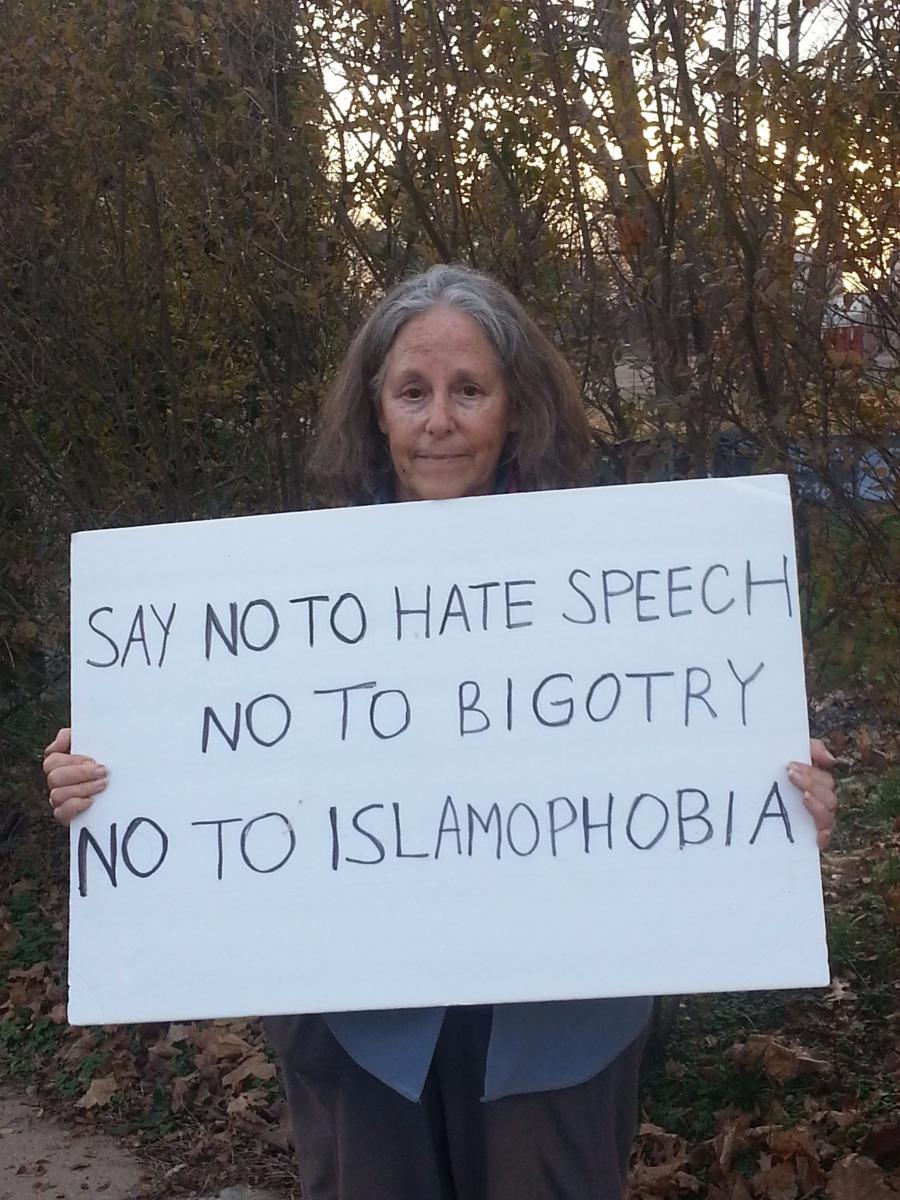 Ellen Rosner, a member of the Central Jersey Coalition Against Endless War and the event’s organizer told New Brunswick Today that she was thrilled to see the dozens of demonstrators who lined the sidewalk, adding that it was imperative to drum up diverse support for the Muslim residents of Central Jersey.

“It’s very important that we realize that all of these things — war, the refugee crisis, Islamophobia — are all connected,” Rosner said, adding that climate change also plays a role in increased geopolitical strife.

“We are in such a crisis at this time that we can no longer be in our own separate little gangs, just fighting this and fighting that. We have to take everything on and realize these issues are all connected.”

The crowd was diverse: Jews, Quakers, Muslims, and atheists, as well as veteran activists.

Many brought homemade signs to wave, but for those who came empty-handed there were materials — posterboard and markers — to create their own.

One demonstrator ran through lines of stopped cars, handing out flyers bearing the anti-war, anti-racism precepts of the coalition, which were printed alongside Martin Niemoller’s famous words regarding the Holocaust: 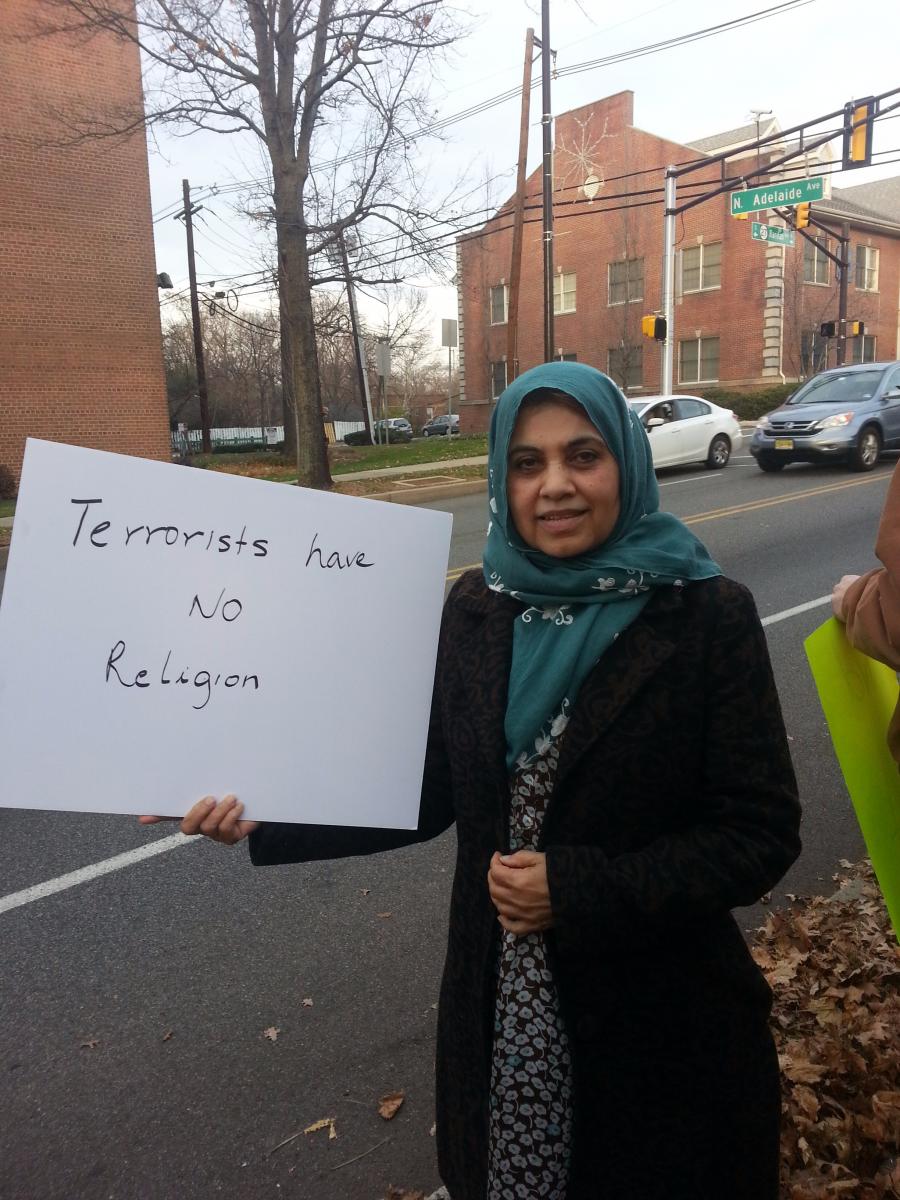 For Abida Jafri, a Muslim woman from Edison, the demonstration proved that much of the community was not fooled by the ever-present rhetorical fear-mongering dominating the cable news cycle.

She said she was comforted to know that so many people from so many different backgrounds were eager to stand up for her.

“I am so thrilled and happy that the other religions and people care about us enough to come out and take their precious time to make the posters and help to defend us,” Jafri said.

“I think that what you see in the media is scary, but when you come out like this you see real compassion. [Islamophobia] is not coming from the people, but is more like an advertisement of the media.”

Dorothy Schwartz, a member of the Central Jersey Coalition Against Endless War, said the organization believes it is their resonsibility to stand against the increasingly sharp tone of anti-Islamic rhetoric circulating throughout the country following the rise of Daesh (also known as ISIS or ISIL) and since the terror attacks in Paris and San Bernardino, California.

“A number of us have been very disturbed, distressed, and angry about the kind of comments not just coming from certain presidential candidates, but from so many people who support them,” Schwartz said.

“It’s promoting an atmosphere of fear and hate, and we wanted to do what we could to get the word out to our Muslim neighbors and our non-Muslim neighbors that there is no room for xenophobia, Islamophobia, or racism here.” 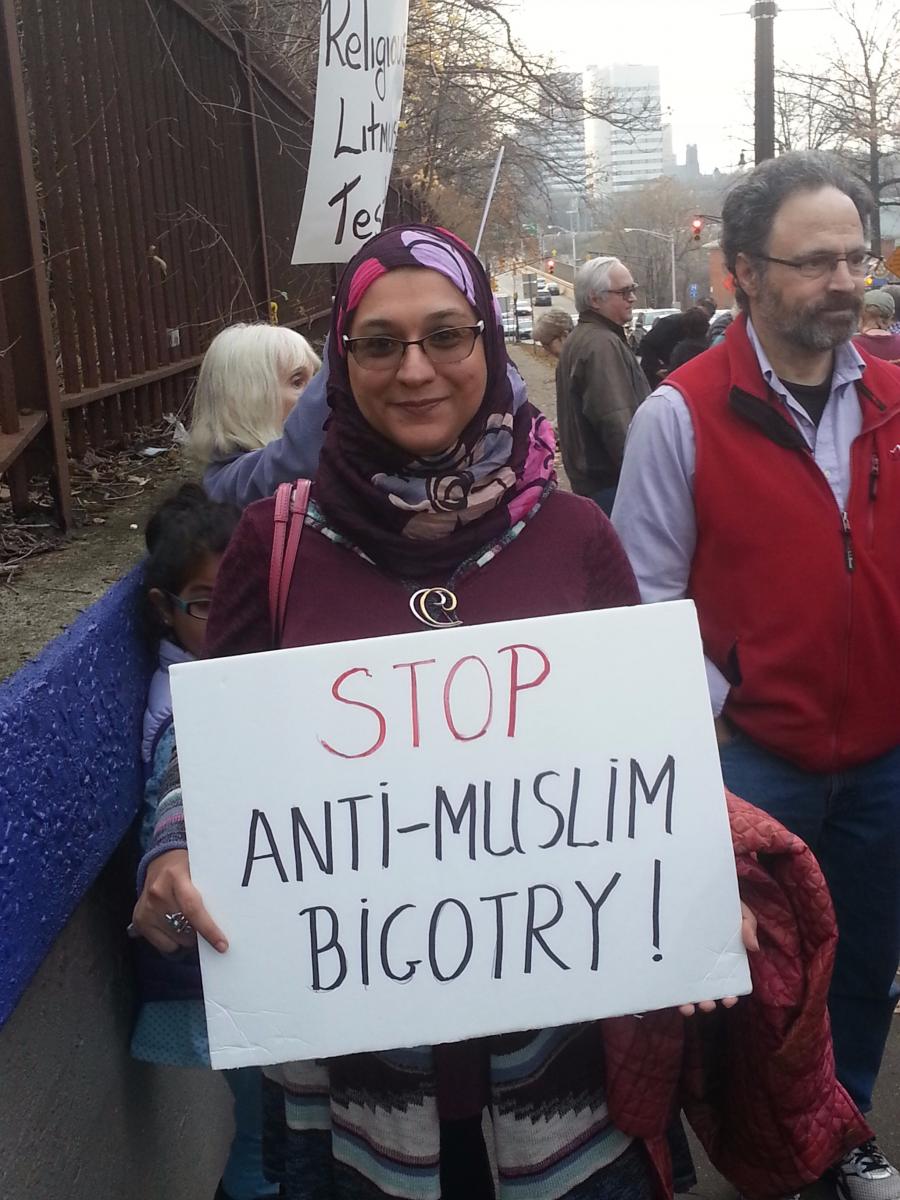 Saadiya Alidima, a Hillsborough resident, thanked the supporters for attending and rebuked any terrorists who would hijack and pervert Islamic precepts in order to fulfill their own political agendas.

“This is really … it feels good, because when you hear about all the things that are happening and the backlash against Muslims, it’s scary sometimes for us,” Alidima, who was wrapped in a pink hijab and flanked by her two young children, said. “It’s nice to know that there are people here who are not Muslim. It makes us feel like we have some real support in the larger community.

“I think it’s really unfair that Muslims all get painted with the same brush. The people who are killing innocents and are doing it in the name of Islam, first of all they need to understand what the word ‘Islam’ means. It means ‘peace,'” she added. “If you’re killing someone, that’s not peaceful and therefore you are not a true Muslim.”

Alidima called on fellow Muslims to continue condemning violence committed in the name of their religion, and invited non-Muslim members of the community to get to know their Muslim neighbors.

“Then they will see we are no different than they are,” she said.

As the crowd dwindled in the early evening, the signs lined the wrought-iron fence behind them.

As traffic passed on Route 27, it was clear that whoever had assembled there earlier would not tolerate the marginalization of any of their neighbors. Rather, the crew that had created these signs was far more interested in building a supportive, loving, and inclusive community.