NEW BRUNSWICK, NJ—Robert Wood Johnson University Hospital (RWJUH) obtained five variances from the city's Zoning Board on May 18, including one that will allow them to add three floors to a brand-new 11-story structure.

Among the approvals granted for RWJUH properties was another that gave the go-ahead to erect a large digital billboard on the side of the new parking/office building, similar to the "Jumbotron" screens displayed in Times Square.

The 30' x 30' billboard required a variance because it was not a normally permitted use.

According to the meeting's minutes, the hospital said that the billboard is intended to inform the public about the hospital, its partners, awards, and other messages complementary to the hospital and its services.

RWJUH submitted seven exhibits with example messages that might be shown, according to the minutes:

A-1 Sample Community Ad – Prostate Month
A-2 North Elevation Rendering
A-3 Cancer Institute Ad for their partner the cancer center
A-4 Hospital services message, e.g., pediatric surgery center
A-5 Rutgers sports messaging, as they are the official hospital of Rutgers
athletics
A-6 Community partner messaging such as NJ Jazz Project and other nonprofits
A-7 Hospital messaging, e.g., US News hospital rankings

The board will not advertise commercial enterprises unrelated to the hospital. It will not include ads from doctors, at this point, but it may recognize some doctor affiliations.

Normally the zoning board would be chaired by Nancy Coppola, who is married to Kevin McTernan, a high-ranking executive at the hospital.

Coppola, however, was absent and the meeting was run by John Cox.

The approvals came while the building was already under construction, and the digital billboard was first turned on in July, just two months later.

The electronic display is designed to be brighter in the daytime than it is at night, so that the sign can be read at all times. The sign is on 24 hours a day, seven days a week.

While the public didn't comment on the billboard, two Zoning Board members raised concerns.

Board member Daniel Chedid wondered if there would be a ban on moving images, and got a "yes" to that question. Moving images would be prohibited on the display.

Michael Manzella asked if having the sign on 24 hours a day was appropriate.  Chedid responded that folks could shut their curtains if they were bothered by the billboard.

All members present approved the billboard, the taller building, and three other variances dealing with homes in the adjacent neighborhood that the hospital is using as offices.

Looking ahead, the hospital wanted the new floors built now so that it could insert new offices and other spaces into them as necessity warranted.

The hospital was represented by Thomas F. Kelso, a land use attorney who serves as the county government's top lawyer.

RWJUH can now use one of the approvals to expand the new "East Tower" project at 25 French Street, adding three additional floors of offices atop the nine stories of parking and two floors of offices that were finished this year.

The 11-story project rises to 120 feet. The hospital's variance has extended the permitted number of floors to 14, and raises the roof by 65 feet, for a total height of 185 feet.

According to the hospital's plans, each additional office floor would have an elevator lobby for four of the tower's six elevators, a large open area for offices, and four rooms in the middle (a men's room, a women's room, a data room, and an electrical room).

The billboard side of the building, which faces the train station, sports a decidedly different appearance.  The hospital did not wait for the additional floors to install the digital billboard. A massive metal frame supports the Jumbotron on the 10th, 11th, and what might one day be the 12th floor.

The wall has a brick base, with a RWJ logo in the middle, and a gleaming aluminum top, crowned with another large RWJ sign.

The tower, which is made of precast concrete, is designed by the engineering firm of O' Donnell & Naccarato, along with Nadaskay Kopelson Architects.

O'Donnell & Naccarato is also helping to renovate the current hospital, and is planning to add a sky bridge between hospital buildings, a doctors' lounge, and install foundations for a planned connection to New Brunswick's train station.

No members of the public commented on the proposed East Tower expansion, as part of the first hearing the board held that night.

The structure, originally approved by the same board during the summer of 2013, was built this year on the former site of a gravel parking lot that was used by the hospital.

Notably, despite its location on near the city's train station, the project includes no ground-level retail.  Rather, the design calls for several "faux" storefronts along French Street, a once-vibrant corridor.

The site, sandwiched between Little Albany and French Streets, was once the home of Doll's Place, one of several music clubs on the street, and several private homes. 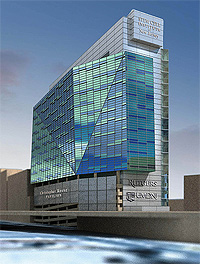 Nearly a decade ago, state and city leaders had envisioned that the site, at that point a gravel parking lot, could be a highrise stem cell research institute.

The project would have been named for Christopher Reeve, the actor who played "Superman" before being paralyzed in a horseback-riding accident.

It would have been among the tallest buildings in the city and the largest research center of its type in New Jersey.

Even though a "groundbreaking" ceremony had been held, the project never came to fruition, hurt by the defeat of a statewide ballot question that would have funded it.

The three other variances on the zoning board's RWJ-centric agenda concerned houses that had been turned into offices in residential areas under temporary permits.

RWJUH wanted to use 11 and 18 Hardenberg Street, and 19 Division Street, as offices.  All three buildings are converted wood-frame houses.

As noted by Kelso, "All three buildings are in residential areas but have been used through temporary permits as office space for several years. "

18 Hardenberg was a house that RWJUH intended to put the offices of the food-service managers in, along with the medical leadership academy's staff, which serves as financial consultants to the doctors.

19 Division Street was allocated to the trauma education department and the liasons to the physicians.

11 Hardenberg Street was the office building for on-site construction contractors who built the East Tower.

Now that construction is complete, it will be converted into hospital offices similar to 18 Hardenberg and 19 Division.

18 Hardenberg and 19 Division have been under hospital ownership for one or two years, while 11 Hardenberg has been owned by RWJ for 6-7 years.

All three variances for the converted houses were approved without a dissenting vote, though the parking issue did cause one Condict Street resident to testify with concerns about parking at 11 Hardenberg.