UPDATE: MyCentralJersey.com’s Suzanne Russell has reported that Rabbi Abraham Mykoff ran into the burning house of worship and rescued the synagogue’s Sefer Torah, a handwritten copy of the Torah, the Jewish holy book.

NEW BRUNSWICK, NJ—Helicopters and fire engines began pouring into the Hub City on October 23 after one of the few remaining historic structures in dowtown caught fire.

The 92-year-old Poile Zedek synagogue was built in 1923, but the building is now left with a “gaping hole” after flames erupted through the roof, according to the city.

At about 4:19pm, officials said someone called to report a “smoke condition” in the building and firefighters arrived within “about five minutes.”

“When the call came in there was one person down in the basement. they did evacuate safely.  No injuries,” said city spokesperson Jennifer Bradshaw. By 5:07pm, as the blaze began to affect rush hour traffic, the city publicly acknowledged the fire using its Nixle emergency alert system, saying the fire department was “battling a blaze” at the synagogue.

“Be aware of possible detours and evacuations in the immediate area,” read one part of the short message from the city’s Police Department.

About an hour later, the blaze was finally “under control,” according to emergency radio transmissions.

“It’s mostly knocked down by this point.  It’s still very smoky down there,” said Bradshaw.

The city confirmed that they ordered an evacuation of “the surrounding street area.”

In addition to city firefighters, fire companies provided ladders from Edison, East Brunswick, and Franklin Township, an engine from North Brunswick, and additional support from East Franklin and Sayreville. “The cause of the fire is not yet known,” reads a press release issued by Bradshaw at 7:03pm.

The synagogue is one of only a handful of buildings left from the days when that neighborhood, the Hiram Market district, was the city’s most historic place.

Across the street from the blaze stands the county-owned Wolfson parking garage, which is slated to be torn down this year.  Meanwhile, the synagogue is surrounded on all sides by parking and modern luxury apartment projects.

As we reported, the three buildings that make up the “Riverwatch Apartments,” located behind the synagogue, were bought by the real estate firm Mack-Cali in 2013 for $41.1 million.

Once part of a federally-recognized historic district, the entire neighborhood lost the distinction after then-Mayor John Lynch Jr. lobbied Congress to remove the historic designation from the area.

Lynch succeeded, and most of the neighorhood was destroyed, allowing for the construction of a federally-subsidized Hyatt Regency Hotel and a series of townhouses, some of which may have damaged by water in the recent incident. 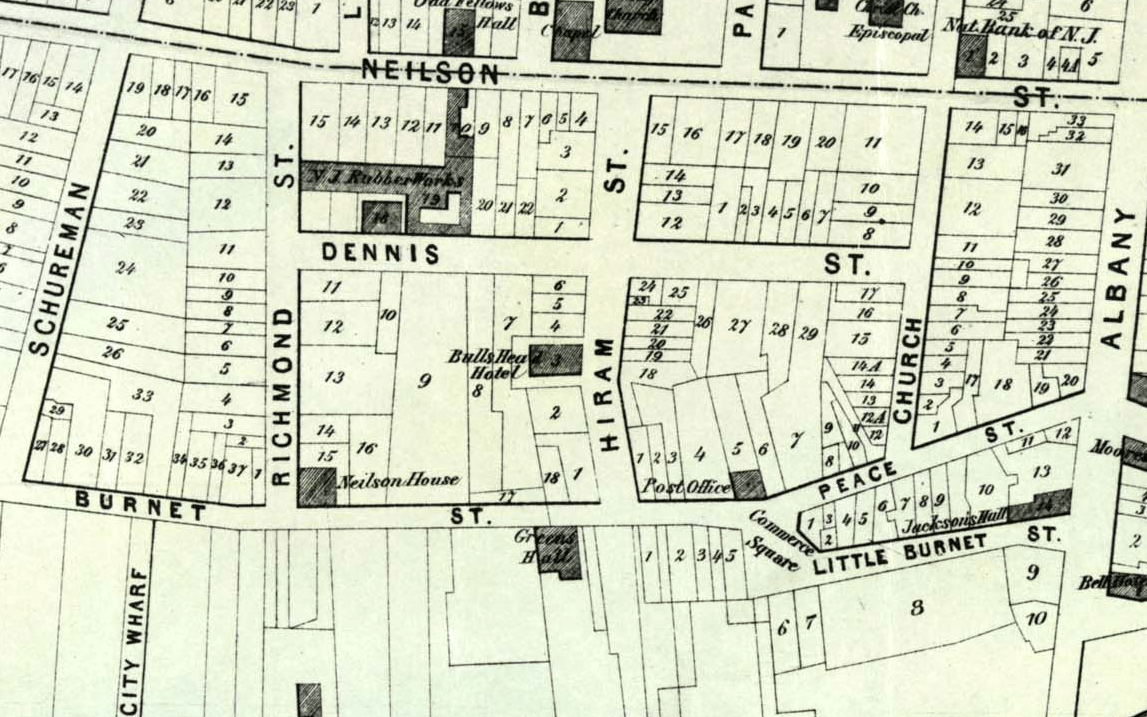 “This is the site of the oldest part of the city and was the original focus of the city’s commercial activity,” reads the text of a walking tour devised by a Rutgers professor. “The first market in town was started here in 1732.”

Among the buildings destroyed in the late 1970’s and early 1980’s were a school house built entirely of wood, the second bank building in the state, and a nineteenth-century rubber factory.

But the synagogue had staying power, outlasting its neighbors, and in 1995, Poile Zedek was again given historic landmark status.

Poile Zedek was “initially founded as a mutual aid society” on November 18, 1901 in the home of Benjamin Elfant and his wife at 25 Hiram Street.

“Originally known as the Independent Laborers’ Benefit Association, most early congregants were from Russia or Poland. The congregation purchased its current home on Neilson Street in 1905,” reads the congregation’s website.

“On August 19, 1923, the cornerstone ceremony was held and one year later, the present building was completed and began being used for services. At that time, the congregation changed its name to Poile Zedek, which means ‘doers of righteousness.'”

Today, it is one of only three synagogues in the Hub City, including the Anesh Emethe Temple on Livingston Avenue, and the Chabad House at Rutgers University.