NEW BRUNSWICK, NJ—About 60 Rutgers faculty, students, staff, and alumni gathered outside of the Board of Governors meeting on October 15 to protest the current administrative treatment of part-time lecturers (PTL’s), also known as adjuncts.

The Board of Governors began by going into a closed session meeting, leaving the public outside, protesting loudly before the open session began later that afternoon.

The protestors rallied in favor of paying PTL’s better wages, and chanted in between speakers, “What’s Outrageous? Adjunct Wages!”

PTL’s are paid $4,800 a course, without benefits, despite the fact that most of them end up working full-time hours. Many of them teach several classes a semester.

The PTL’s are represented by the Rutgers American Association of University Professtors/American Federation of Teachers (AAUP-AFT), as a separate unit from the full-time faculty.

“For many people, when you calculate how much work goes into grading papers for a large lecture class, they actually make less than minimum wage,” said Joe Richard, an organizer of the Rutgers AAUP-AFT.

Their main demands from the administration are for pay increases, professional development funds, and health insurance benefits.

The pay increase they are fighting for would make it such that they are paid roughly $7,000 a course, as opposed to the current $4,800 amount.

This pay increase would make it so that PTL’s are paid the same per course credit that non-tenure track full-time faculty are paid, and relates to their motto “Equal pay for equal work.”

Another major grievance the PTL’s have with the administration is how much of their work goes unrecognized and unpaid.

Currently PTL’s are not paid for any work that happens outside of the classroom, such as advising students, writing letters of recommendation, and grading papers and exams.

According to Joe Richard, when the PTL’s union representatives brought this up to the administration at the negotiating table, their response was “just stop doing it.”

After about an hour of speeches, the rally concluded and the crowd of protestors marched inside for the open session. 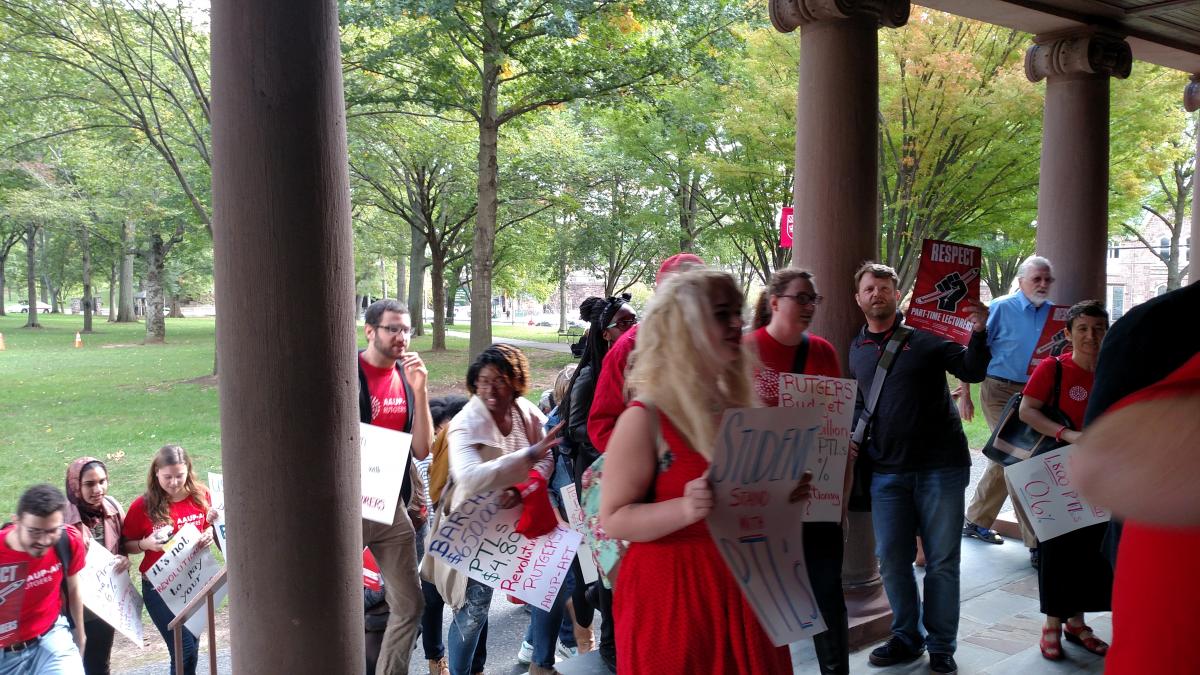 The great majority of them, however, were denied the opportunity to speak when they applied to do so earlier in the week.

“How is it that when we choose to speak out against something that is inherently wrong, they have the gall to turn you away and silence you?” said undergraduate student Mariah Wood, addressing the PTL’s. “You’re just asking for respect!”

Inside the meeting, AAUP-AFT President David Hughes, a professor of Anthropology, was the only applicant who was given the opportunity to speak, and he chose to address the construction of new buildings.

Hughes explained to the board that the pay increase they are asking for is relatively small given other costs at the university.

“We’re talking about $2 million or so. We’re talking about the money that you paid Mike Rice and the other guys not to work at Rutgers,” said Hughes. “We’re asking you to pay this money for 1,800 PTL’s who teach 30% of the classes, this ought to be a no-brainer for a board that understood the primary mission of this university.”

In Spring 2013, amid a player abuse scandal, basketball coach Mike Rice was fired and atheletic director Tim Pernetti was forced to resign.  Pernetti alone was paid $1.2 million upon resignation.

The Board did not address Hughes’ comments and moved on with the agenda.

After negotiating a contract for full-time faculty earlier this year, the Rutgers AAUP-AFT has since been fighting avidly for the part-time lecturers over the past several months.