NEW BRUNSWICK, NJ—Easton Avenue, one of the city’s most vibrant thoroughfares, is home to an exceptionally high concentration of pizza parlors with a growing and changing array of establishments.

The sheer number of establishments, and the natural variation in pizza preferences, make the task of identifying the “best” pizza slice both a difficult and controversial endeavor.

But there are certain qualities that seem essential in order for a slice to be deemed the best: These are just a few of the tenets through which pizza perfection is achieved.

The cheese must be evenly melted and the sauce should offer a vibrant, fresh tomato flavor. The entire slice should not sag, crack, or drip a puddle of grease.

The crust, sauce, and cheese must all exist in proper proportion.

With these principles in mind, New Brunswick Today began its mission to discover Easton Avenue’s best slice of pizza.  Ten slices later, we were convinced we had found a winner.

Each pizzeria was judged by its plain slice alone. The simple combination of crust, sauce, and cheese represents pizza in its most elemental form.

In addition, only pizzerias selling single slices were considered, even with the obvious risk: while whole pies are almost always served fresh from the oven, individual slices often degrade in quality due to reheating.

My first slice came from Giovanneli’s ($2.00). Not excessively greasy, the oversized slice needed more cheese flavor to contrast the herby tomato sauce, despite its thick layer of cheese. The highlight of the slice was its crust, with its browned underside providing a crisp texture noticeable in nearly every bite. 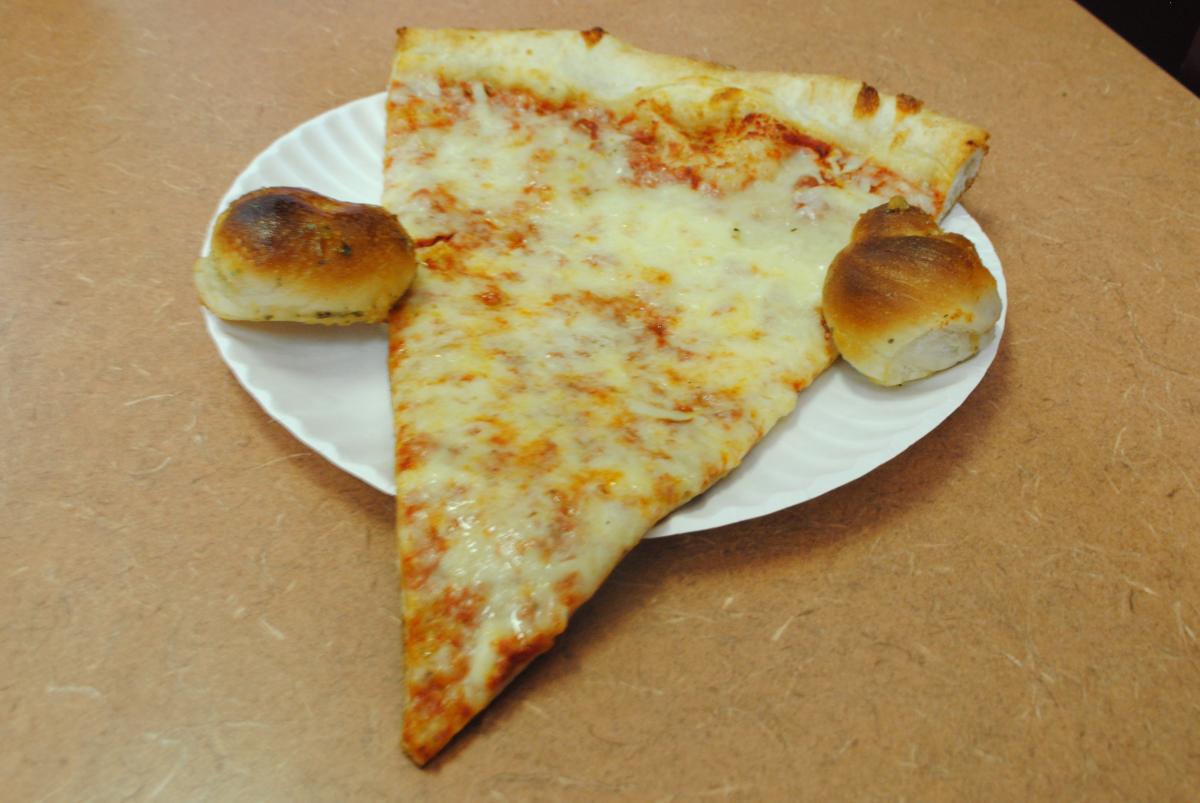 Although my slice at Jimmy’s ($2.00) arrived with two free garlic knots, they were no reparation for the plain slice’s pitiful cheese. Nearly white in appearance, the cheese felt creamy with the gooey, unappetizing texture of microwaved mozzarella.

Though the bottom of the crust was strongly browned, the oversized slice seemed soggy. Its best quality was its sauce, which featured a noticeable hint of garlic.

The slices at La Familia ($2.25) and Nuebie’s ($2.00) were both plagued by plasticky cheese and scant sauce flavor. Paulie’s Pizza ($2.14) offered a similar slice, but with a heavier layer of pale, white cheese. Because of the off-putting texture of their cheeses, all three slices seemed like leftovers that had been reheated a few too many times.

Though its layer of cheese was very greasy, the oversized slice at RU Grill & Pizza ($2.00) held its own, with a strong cheese flavor that simply worked. Its crust had an average crispness and a doughy flavor, while its sauce added little flavor overall. 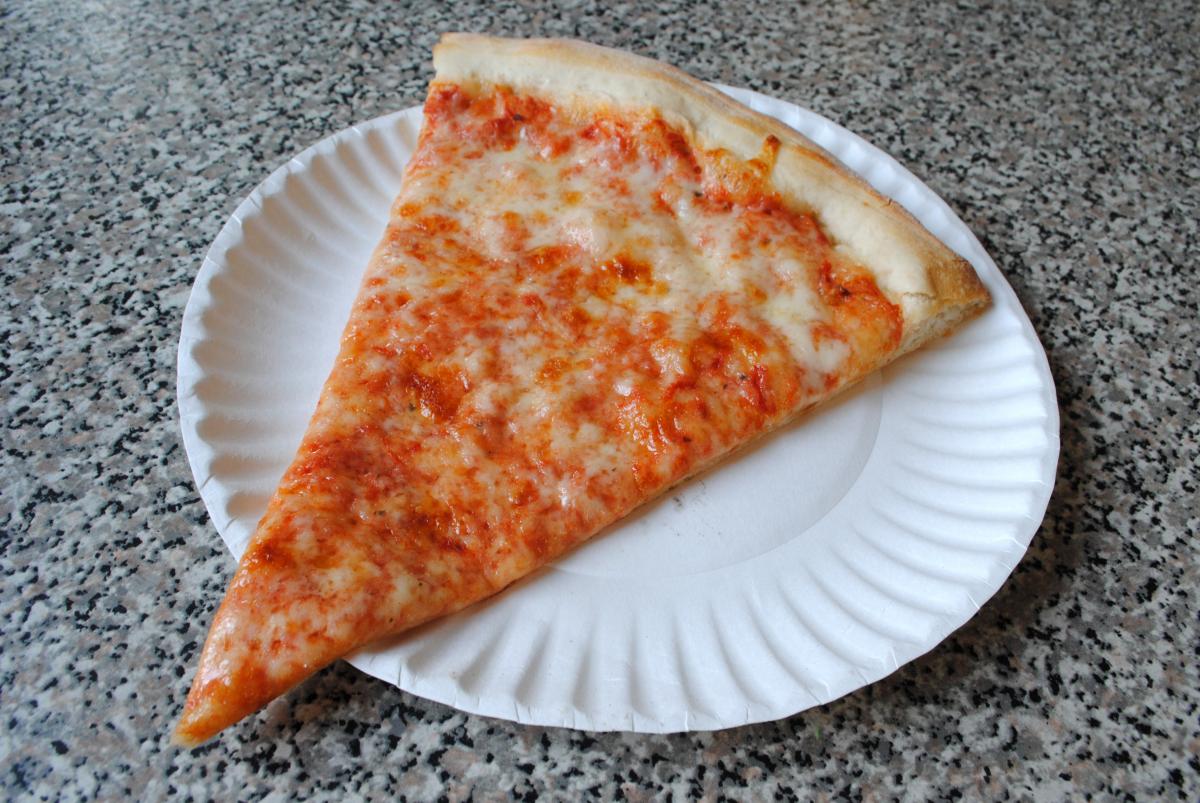 The slice at The Original Pizza City ($2.00) was pale, irregular, and under-sauced. Its primary flavor was drawn from the combination of its crust and white layer of cheese, with the thin splash of tomato sauce remaining barely detectable.

The cheese itself possessed the light funk of mozzarella that has spent a few too many days in the freezer. In addition, this was the only slice on Easton that lacked any browning at all on its underside.

The crust was fluffy at the edges but uneven throughout the slice, starting out thin at the tip and gradually increasing in thickness moving outward. As a result, The Original Pizza City’s slice was too bready halfway through.

Though 25 Pizzas prepares their slices using a brick oven and an “in-house secret recipe” for pizza sauce, the result wasn’t exactly superior to Easton’s other slices. The slice at 25 Pizzas ($2.14) was topped with far too much cheese, resulting in a greasy, soggy piece of pizza.

The cheese fell off in large clumps and smothered the sauce’s flavor. The slice’s crust, more bready than expected, was comparable to an average crust baked in a typical gas oven. The brick oven added nothing of note. 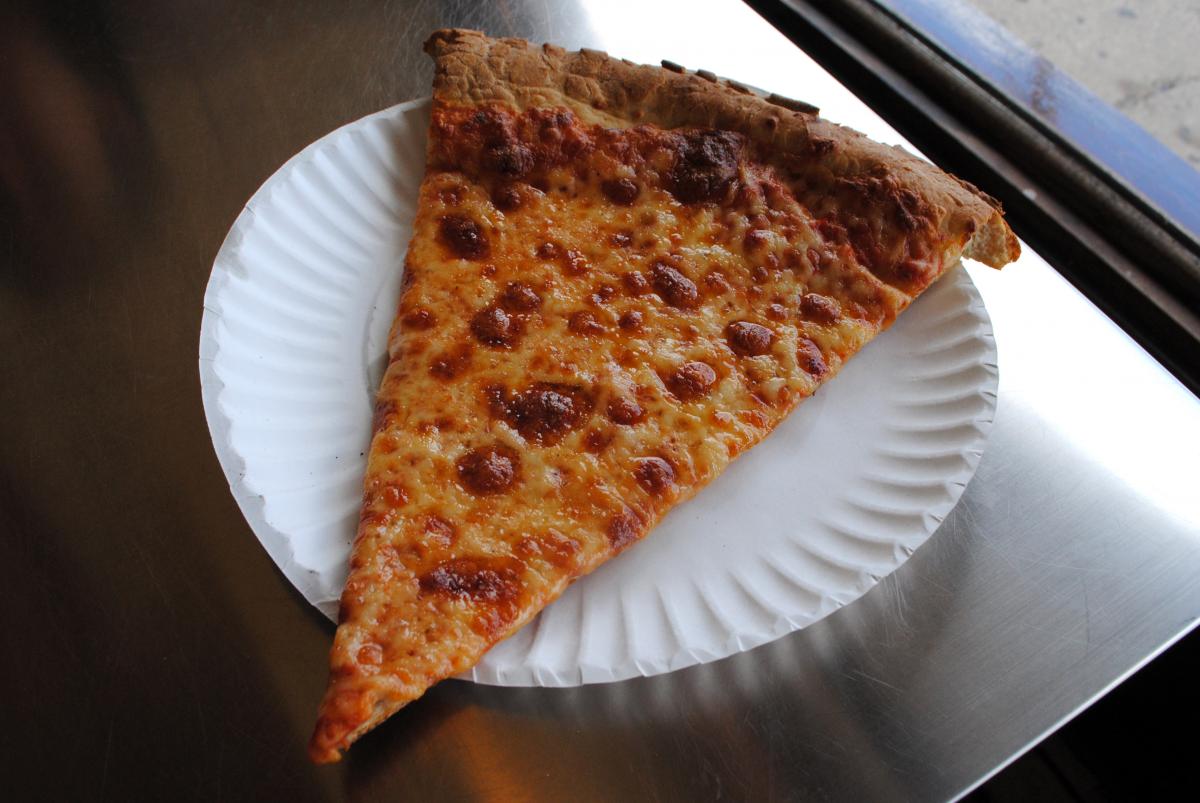 The slice at PJ’s Grill & Pizza ($2.25) was the most balanced of all. The stringy cheese felt fresh and tangy with tiny blisters of browning on top, maintaining the fragile sweet spot between melted and burnt that no other Easton slice shop seems to achieve.

The layer of tomato sauce was applied sparingly, with its light, herby flavor just noticeable against the cheese’s sharpness. The crust was bready, but not too dense or fluffy, with a medium amount of browning.

A newcomer to Easton, Daniel’s Pizzeria opened its doors only this summer. At the time of writing, the ambiance didn’t exactly embody fine dining — the counter was lined with empty Grey Goose bottles, the lack of natural light left much of its interior dim, and a single card table served as seating for the slice shop’s patrons.

The pizzeria shares its interior with a Japanese restaurant and the presence of a sushi bar further added to my confusion. 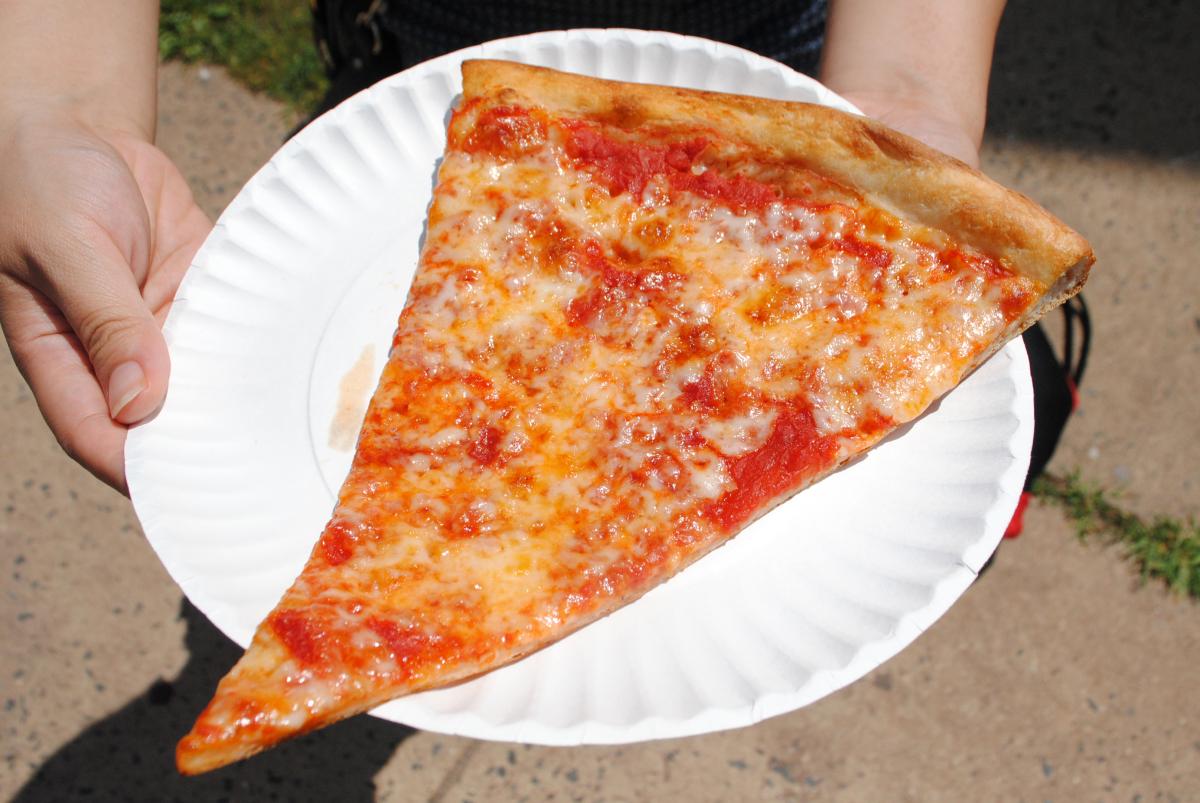 Expectations were low as New Brunswick Today ordered a slice at Daniel’s ($2.00), one of the newer spots on Easton.  But the results were surprising.

Whereas most of the tomato sauces topping the slices of Easton were mundane, Daniel’s tomato sauce has a certain freshness evoking real tomatoes.

Even its texture was more akin to crushed tomatoes than a smooth, pre-made pizza sauce. Though the sauce flavor was dominant on the slice, the cheese was lightly tangy and the crust was fairly crisp, more cracker-like than bready at its edges.

After completing this tour of Easton’s slice shops, NBToday was disheartened by the city’s abundance of lamentable pizza. Even so, a clear champion had emerged.

Due to its overall balance and praiseworthy cheese, the plain slice at PJ’s earned its rightful title as the best on Easton Avenue. No other slice was as well-composed or rich with cheese flavor.

Second place must go to Daniel’s Pizza for their superb tomato sauce.  We chose not to base our judgements upon atmosphere.

The rest of Easton’s sauces were put to shame by the full-bodied tomato flavor of the sauce at Daniel’s. Though this pizzeria may be a recent arrival to the New Brunswick scene, it should not be underestimated. Daniel’s definitely has a slice worth checking out.

As much as we would like to name a third place victor, the fact remains that the rest of Easton Avenue’s slice shops were largely unmemorable.

Several of the slices suffered from the obvious use of low-quality ingredients. Perhaps these particular slice shops are cutting back to lower their prices and appeal to penny-pinching students, or maybe they are just indifferent toward the quality of their product.

Whatever the reason, it’s going to take a lot of cheese, sauce, and dough before the rest of Easton’s pizza shops rival PJ’s and Daniel’s.