UPDATE (9/28): NBPA Executive Director Mitch Karon told NBToday, “I spoke to [store operator Kevin] Kim regarding the storing of perishable items at Ferren. He advised me that he will be removing and destroying any product that were in open containers.”

NEW BRUNSWICK, NJ—A long-awaited redevelopment project on a prime piece of real estate is being held up due to environmental contamination, according to several sources.

But at the same time, the abandoned parking garage in the center of the city’s downtown is apparently serving as a storage facility for hundreds of watermelons.

The Ferren parking garage was closed in 2013, and eventually surrounded by construction fences.

Once the centerpiece of a modest revitalization, it is now a vacant, unsightly eyesore taking up two of the primest blocks in the city’s downtown.

The watermelons are tucked away inside the abandoned garage in about 16 cardboard containers, stacked in groups of two. 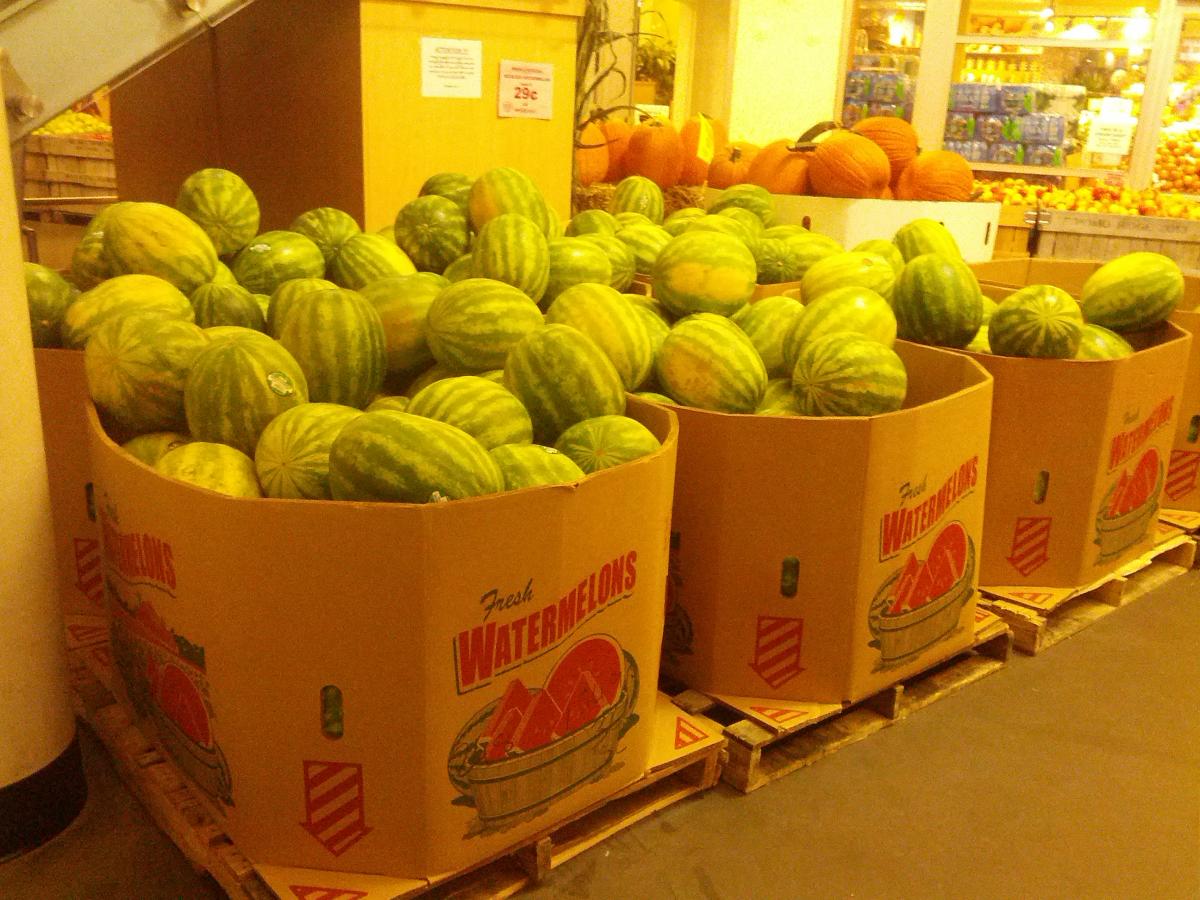 The cardboard boxes are identical to the ones the store displays for sale in the lobby of Wellness Plaza, the building that the houses the supermarket.

The New Brunswick Parking Authority (NBPA), which owns both facilities, and confirmed that it gave permission to their tenant, a Key Food supermarket operator, to use the abandoned garage for storage.

“We are allowing Key Food to use the Ferren for temporary storage,” said NBPA Executive Director, when asked about the melons.  “You might want speak to Key Food management. I am sure they will be able to address your questions.”

But the Chairman of the Board of Directors at the agency took a different position. “Yeah. They shouldn’t be storing open fruit in there,” said Kevin McTernan, an official at Robert Wood Johnson University Hospital who has chaired the NBPA Board of Commissioners for more than a decade.

A Key Food spokesperson did not immediately respond to New Brunswick Today’s inquiries.

It has been common knowledge among the powers that be that the Ferren deck was at least somewhat contaminated, and the head of the non-profit development company that built the Welleness Plaza building said as much in a post on an online message board.

“We are currently working through environmental challenges on the Ferren,” wrote Chris Paladino, President of New Brunswick Development Corporation (DEVCO), which is also working with the NBPA to replace the massive deck with several high-rise buildings.

“There was a spill from an off site source in the 80’s and it needs to be addressed as part of the demolition phase,” Paladino wrote.

DEVCO signed an exclusive, 18-month deal with the NBPA to market the potential for new developments at the Ferren site.  That agreement is set to expire in October. Sources say the contaminant that spilled is heating oil and that it originated near 60 Paterson Street, back when the 12-story building was the home of the county government.

The building has since been transformed into a luxury apartment building operated by Pennsylvania-based Pennrose Properties.

NJDEP’s Data Miner public records website was not working and New Brunswick Today was not able to confirm any details about the contamination, but 60 Paterson Street was listed as a site that had records of inspections, violations, or both.

Thomas F. Kelso represents the county government and DEVCO, the developer that built the supermarket and has big plans to develop the Ferren parking garage.

At a county government meeting, Kelso revealed that the removal of an underground storage tank led to the Ferren garage being a designated site for “monitoring wells” to track the contamination.

On July 23, the Middlesex County Board of Chosen Freeholders voted unanimously to switch which company was in charge of the remediation at the 60 Paterson Street site.

“This goes back to the 80’s where there was a tank removal… and this change is in anticipation of the demolition of the Ferren garage and so there is a change in the licensed site remediation person,” Kelso said.

Kelso, who has also represented Pennrose in the recent past, added, “There are monitoring wells that currently are down gradient from [the former county building] in the Ferren garage.”

“This is simply a change of the previous [licensed site remediation professional (LSRP)] which was Keating Environmental to now CME Associates,” said Kelso.

The LSRP contract is worth $291,498, according to resolution #15-1271-R.  The hiring of the firm was done outside of a public bidding process because it is considered a “professional services” contract, and CME Associates was the only company offered the job.

As we reported previously, CME Associates and its employees were by far the biggest donors to a system of questionable political action committees meant to circumvent the state and local pay-to-pay reform laws.

Kelso, who also serves as Executive Director of the New Brunswick Democratic Organization, was apparently involved in handling the county Democrat organization’s response to an investigation into one of the political funds: Women For Good Government.