NEW BRUNSWICK, NJ—Livingston Avenue is known for its many large and fancy mansions, many of which have been turned into professional offices, and for being a dangerous road for pedestrians.

For the most part, the avenue has four lanes of auto traffic, and two more lanes for parked cars.  Sidewalks on either side are wide, but crossing the street can be difficult because it’s 60 feet from curb to curb.

The avenue runs, razor-straight, to the south, crossing over the border into North Brunswick. The speed limit is 25 miles per hour, yet this wide road has seen numerous complaints about crashes and fatalities.

In addition to being the home of five public schools and six houses of worship, Livingston Avenue has a center for people with sight disabilities, the Joseph Kohn Rehabilitation Center.

Dewberry Engineers, a firm specializing in urban planning and civil engineering, unveiled four options for rehabilitating the street itself. The firm’s presenters displayed those alternatives to around 50 interested and skeptical stakeholders, including cyclists, neighborhood residents, and the media.

Middlesex County engineer Richard Wallner noted that the county has not yet come up with funding sources for any of the plans.

The four options have design times ranging from a year to three years, and all have a construction time of a year. Benefit-cost ratios, measured by dividing the benefits of reduced crashes by the costs of design and construction, ranged from 3.13 to 6.15. In the back of the room and on the walls, giant linear maps showed the layouts that Livingston Avenue would have under each option.

On papers given to the audience, residents were asked how much they liked each of the four options, as well as their opinion of where to put the bicycle lanes, specfically whether they should be located between the parked cars and the sidewalks, or between the auto traffic and the parked cars.

The first option, “Hybrid Road Diet,” has the avenue as a two-lane road flanked by bicycle lanes and parking from Elizabeth Street to Sandford Street.  Then it divides at Sandford Street to include a third marked lane, intended for drivers wishing to make a left at any point.

This option would cost about $3.5 million, take one and a half years to design and a year to build, and have a benefit-cost ratio of 3.13. 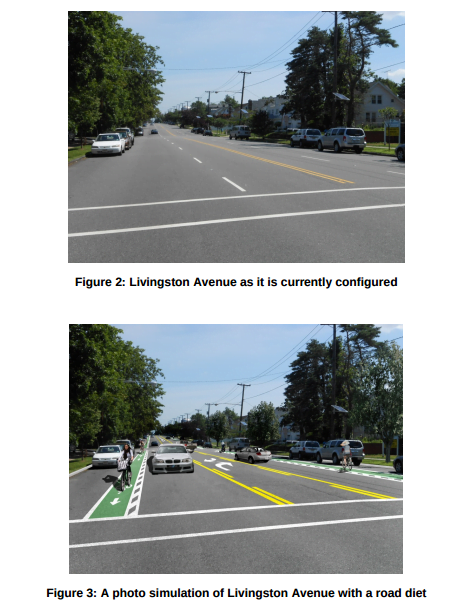 The second option, “Center Median,” is very similar, except that it has a median divider in the Elizabeth Street to Sandford Street portion of Livingston Avenue, and bans left turns along this stretch.  As one Planning Board member explained, bans on left turns keep traffic from backing up while people wait to turn. The median would provide pedestrians crossing the road with a safe place to rest.

The cost of this alternative is slightly higher, at $3.6 million, and it would take as long to design and build as “Hybrid Road Diet”.  The benefit-cost ratio would be 4.02, as fewer pedestrians would be run over.

The third option, “Classic Road Diet” gives Livingston Avenue three motor vehicle lanes, all the way from Elizabeth Street to New Street – two for traffic and one for left turns. This would cover the entire 26-block study area.

The fourth alternative is the “Multi-Use Path,” an idea seen in places such as Montreal.  The bicycling paths would be separated from the street by buffers or curbs; parking would be on the side of the street, and the traffic lanes/turn lanes would be the same as those in “Classic Road Diet.”

It is the most expensive option to build, at $4.2 million, but allows bicyclists the chance to use separate bicycling paths, instead of merely using lanes on the same road as the cars.  The Multi-Use Path would take three years to design and one to build; its benefit-cost ratio is 5.48.

Dewberry used a cost-benefit analysis based on approximations of money saved from not getting into crashes, and Alternative #3 did the best.  Alternative #4 (Multi-Use Path) received a similarly high score, while alternative #1 was ranked the lowest. 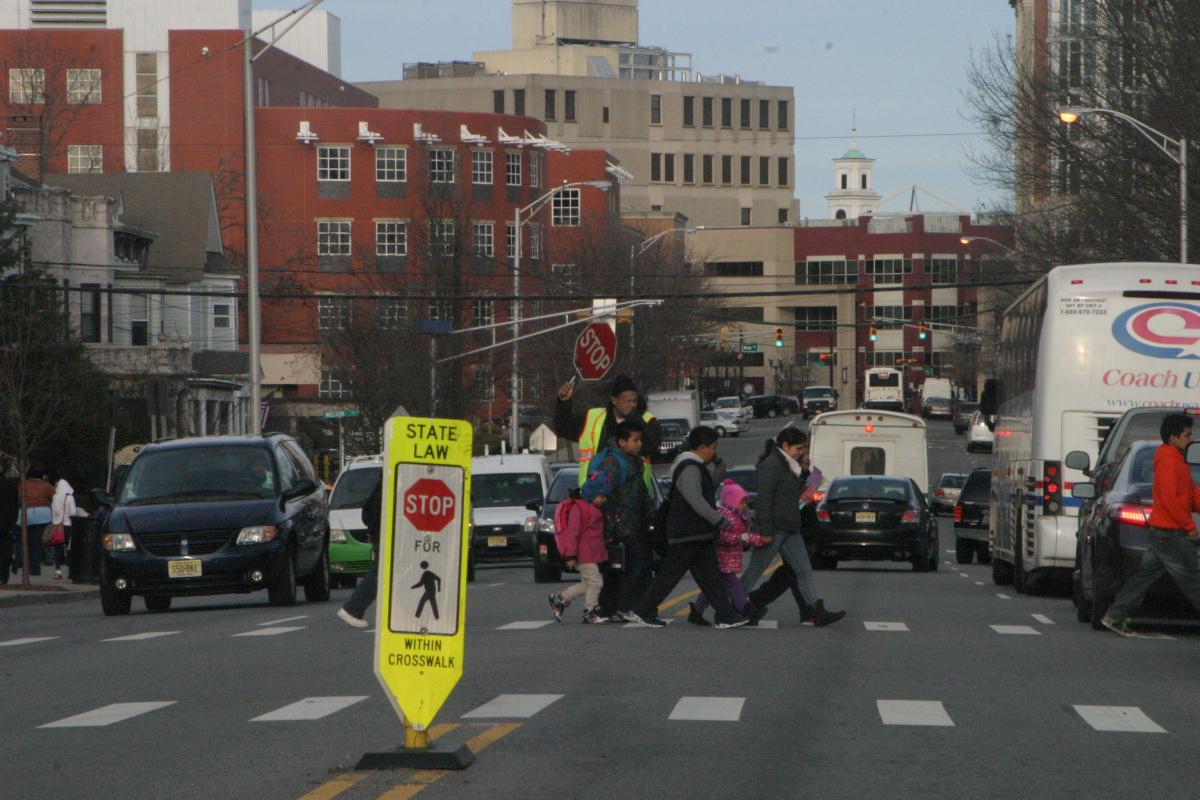 However, Glenn Patterson, New Brunswick’s Planning Director, said there were benefits that could not be easily measured in dollars, such as pleasure from bicycling, cleaner air, etc.)

Residents at the meeting – like longtime New Brunswicker Anthony Larobina – were happy that the city and county were responding to their concerns about crashes, some of them are concerned that the changes don’t solve the problem of there being too many collisions.

At least one of them, frequent driver Angel Fuentes-Pesquera, suspected that the new designs would not keep jaywalkers from running across wide Livingston Avenue, which he considers to be the cause of the crashes.

Among the other concerns expressed were the lack of lighting, and the small number of intersections with traffic signals.

There was some curiosity about whether metered parking would be expanded. The jury is still out on that issue.

Some folks were skeptical about whether rearranging Livingston Avenue’s road markings would slow down traffic.

Patterson thought so, as making lanes seemingly narrower would lead to a perception of danger by motorists, causing them to drive more slowly. 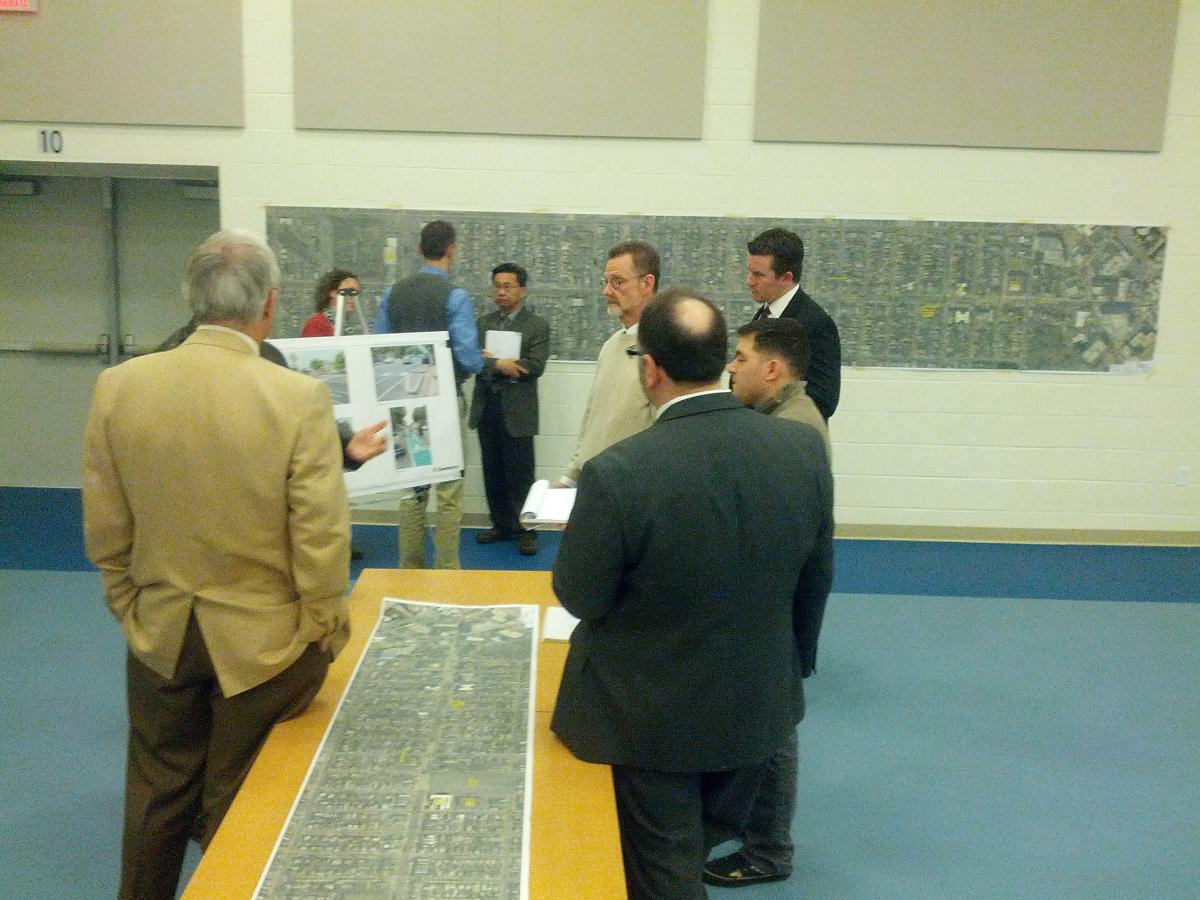 The August meeting is not the first community meeting to discuss street diets on Livingston Avenue.  Some 50 residents of the area, mostly Spanish-speakers, flocked to a February presentation in the same room.

At that meeting, Eva Sumano, speaking for the neighborhood-oriented Unity Square project, translated the speeches of concerned residents into English. She said that residents recommended educating folks about school-zone safety and wanted better lighting, including lighted crosswalks.

“A lot of [motorists] are not respecting the cross[ing] guards at all,” she said, translating for a resident.

The long crossing distance proves difficult for many, including the city’s smallest residents, who often walk to school with the help of parents, siblings, and crossing guards.

Those guards are present on school days, directing traffic when kids are heading to and from the city.

Last fall, the City gave the guards a raise, and began getting reimbursed by the Board of Education for the guards’ wages for the first time.  The government also bought easy-to-see uniforms for the guards.

But vehicle crashes in the Hub City, including an infamous one involving New Brunswick Fire Department Director Robert Rawls, spurred Middlesex County to study ways of putting the troubled avenue on a street diet.

Rawls pled guilty to careless driving in his notorious crash, which injured three children, and was fined $206.

Rutgers University’s Alan M. Voorhees Transportation Center found that a road diet can reduce crashes by 19%, and it also found that most cars traveling on Livingston Avenue go over the 25 mph speed limit.

The avenue had some 38 crashes annually, and the Voorhees Center study said a road diet would reduce that amount by about 7 crashes.

Some parts of Livingston Avenue, particularly in North Brunswick, are already in a road-diet format. At least at night, the traffic flows smoothly over those stretches.