For Peele and Johnson, it is not the first time they faced charges for violent crimes.

Peele faced assault charges in New Brunswick after an altercation with a female, and missed the final two months of the 2014 season before the charges were dropped and he was re-instated.

Johnson faced charges of robbery, aggravated assault, and criminal restraint in his hometown of Egg Harbor Township.  Those charges were also dropped.

In both cases, victims failed to appear in court, helping the men get the charges dismissed. 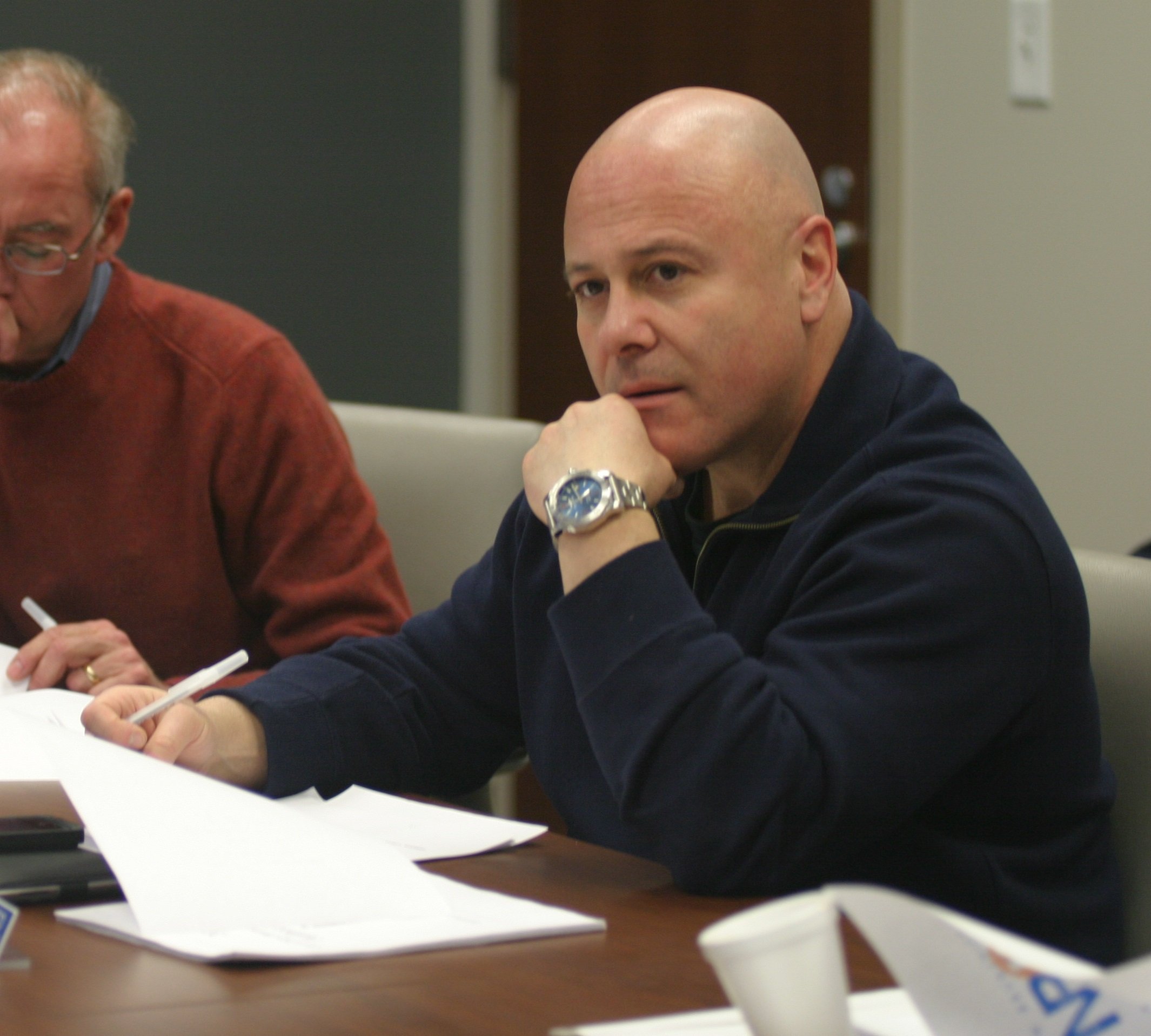 As we reported, the Middlesex County Crime Stoppers organization was started by New Brunswick Police Department (NBPD) Director Anthony Caputo, during his brief retirement from the agency's top job.

The organization has a somewhat vague relationship will law enforcement, and it is funded by a combination of public parking revenue, assets siezed from criminals, and a variety of non-profits and private corporations.

Though the group lists the Middlesex County Prosecutor's Office and 29 other agencies as "Law Enforcement Partners," a spokeperson for the MCPO has said that it is "not connected" to the group, officially known as Middlesex County Crime Stoppers, Inc.

According to the non-profit's founding document, "the Corporation shall promote community safety and welfare through providing assistance to the Police Departments of Middlesex County in obtaining information about major crimes, wanted persons, and other criminal activities."

"The corporation shall help develop a community offensive against crime, motivating citizens to cooperate with Middlesex County… law enforcement agencies," it continues.

"The program will provide rewards and awards for such cooperation, and raise money to carry out the foregoing."

New Brunswick Today reported on the details of the group's lavish fundraiser in July, which took place on the yacht of notorious real estate developer Jack Morris, who also serves as Chairman of the Board of Directors at Robert Wood Johnson University Hospital (RWJUH).

Numerous high-level officials declined to say where the large group of men were going, as dozens of attendees boarded a charter bus in downtown New Brunswick, destined for Jersey City's Port Liberty. 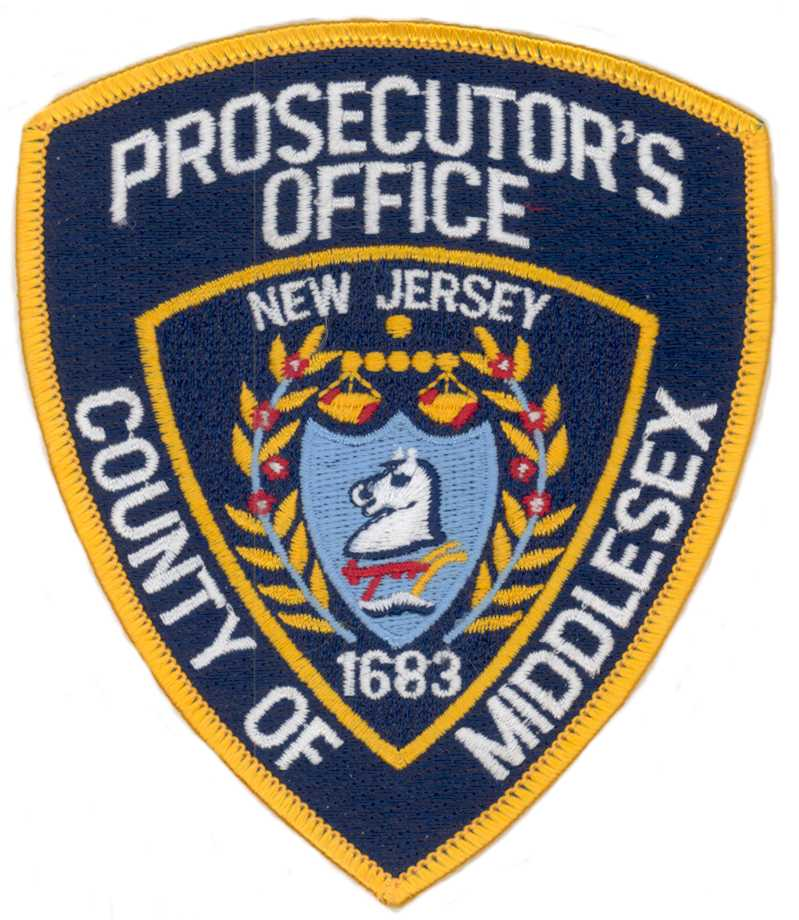 Though the prosecutor's office has proclaimed it is not directly affiliated with the crime-stopping group, it was that office's regular spokesperson–and not Caputo–who responded to New Brunswick Today's inquries about Schiano's role with the organization.

"Director Caputo asked me to respond to your e-mail question on Greg Schiano," wrote MCPO spokesperson James O'Neill. "[Schiano] left the board of directors after accepting the coaching job with Tampa Bay in January 2012."

Schiano only held down the pro football job in Tampa for two years before being fired.  Despite back-to-back last-place finishes in his time coaching in the pros, Schiano was recently hired by ESPN as an "NFL Analyst."

NJ.com columnist Steve Politi lamented Schiano's new role, calling for his return to Rutgers following a damaging scandal where Coach Kyle Flood compromised the academic integrity of the university by trying to convince a professor to offer his player the chance to submit a make-up assignment over the summer.

Politi even suggested Schiano should also be given the powerful Athletic Director position, because he assumes Schiano could never work with current AD Julie Hermann. 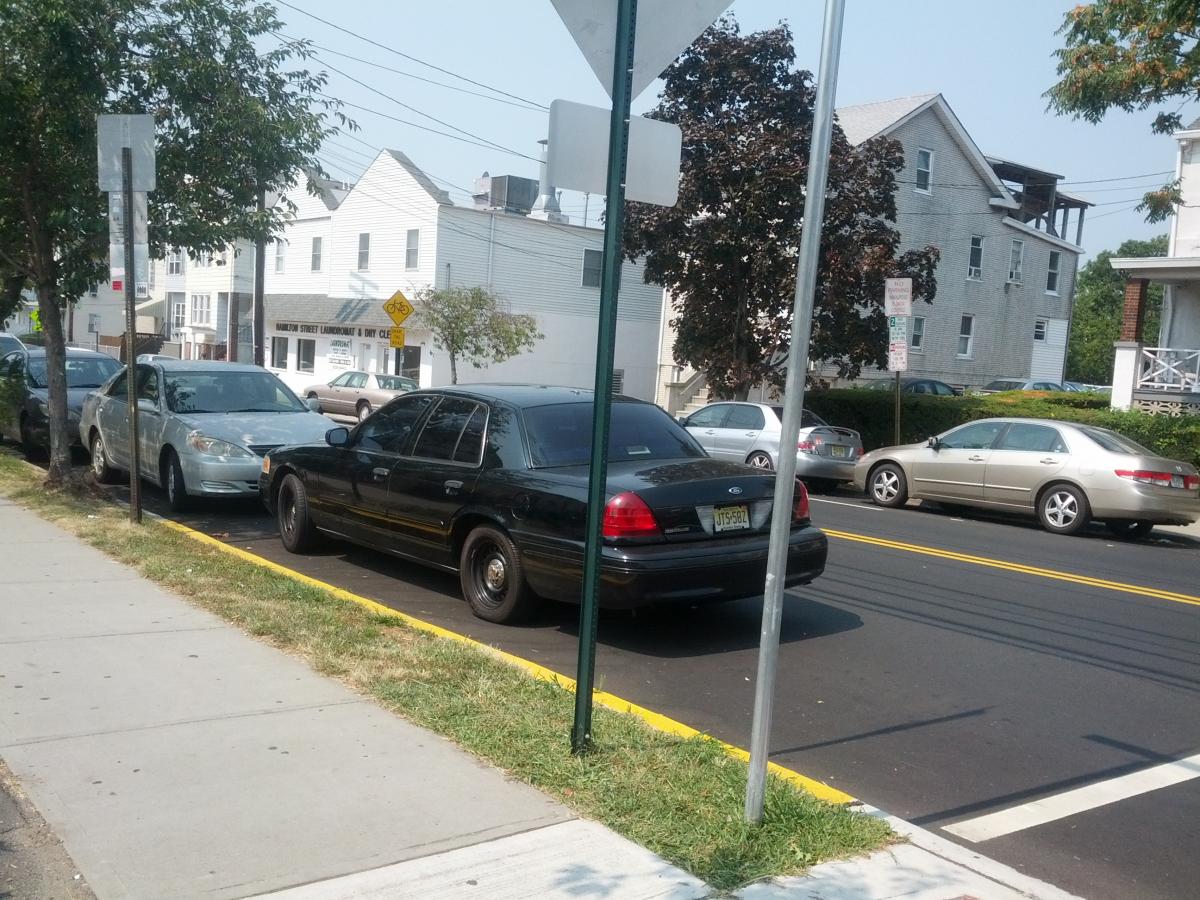 The player who Flood went out of his way to help, Nadir Barnwell, was among those arrested on assault charges on September 3, as MCPO investigators and city police arrested much of the team's starting secondary two days before their first game.

Barnwell, too, had a previous record of criminal misbehavior.  In October 2013, he was arrested and charged with driving while intoxicated and careless driving after crashing his car in Piscataway.

Flood suspended Barnwell for a single game after the incident.

Now, two years later, an internal investigation found that Flood violated university policy and disregarded what academic advisors told him, specifically that any contact about a player's grades constituted an NCAA violation.

Flood also repeatedly tried to cover up or disguise his activities on behalf of Barnwell, and told the professor he purposely did not wear Rutgers apparel to their meeting outside the Princeton Public Library so he would not be recognized meeting with her.

Flood was suspended for three games, but will still be paid his $1.05 million annual salary and get to coach the team during the week.  The suspension only applies to "gameday."

University President Bob Barchi confirmed that the punishment, which also includes a $50,000 fine, does not cover any of the issues arising from the alleged criminal activites of the team, and only comes in response to the academic integrity violations.

Of the five accused athletes recruited by Schiano, all except Carroo were arrested and charged with an "unprovoked assault" on April 25, where a group of at least a half-dozen men broke a 19-year-old Rutgers student's jaw on Delafield Street.

Johnson and Boggs were also charged in three separate armed home invasion robberies, where current and former football players targeted marijuana dealers because they thought their victims would not call police.  Those incidents took place as part of a crime spree, on April 26, April 27, and May 7.

Pollard and Terry were also charged with one similar home invasion from almost a year earlier.

Carroo is the only one facing charges for a recent incident, after he was arrested and charged with simple assault after he allegedly slammed a Rutgers student worker in the school's "hostess" program to the concrete outside Rutgers Stadium. 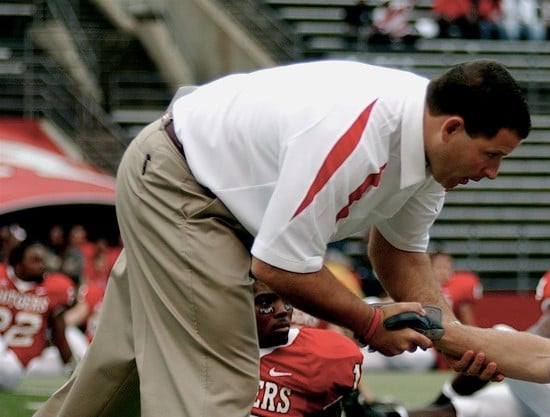 Schiano was one of ten board members that were part of the inaugural leadership of the anti-crime organization.

Along with Schiano and Caputo, the other members of the board include:

According to the non-profit's certificate of incorporation, Caputo served as the initial President and Board Chairman.  DelBagno served as Vice-President, Franz as Secretary, and Crocco as treasurer.

Earlier this year, the MCPO spokesperson issued a release announcing a new board member: Wall Township resident Scott Sprengel, who is the President and general manager of Surburban Transit, a local bus company. 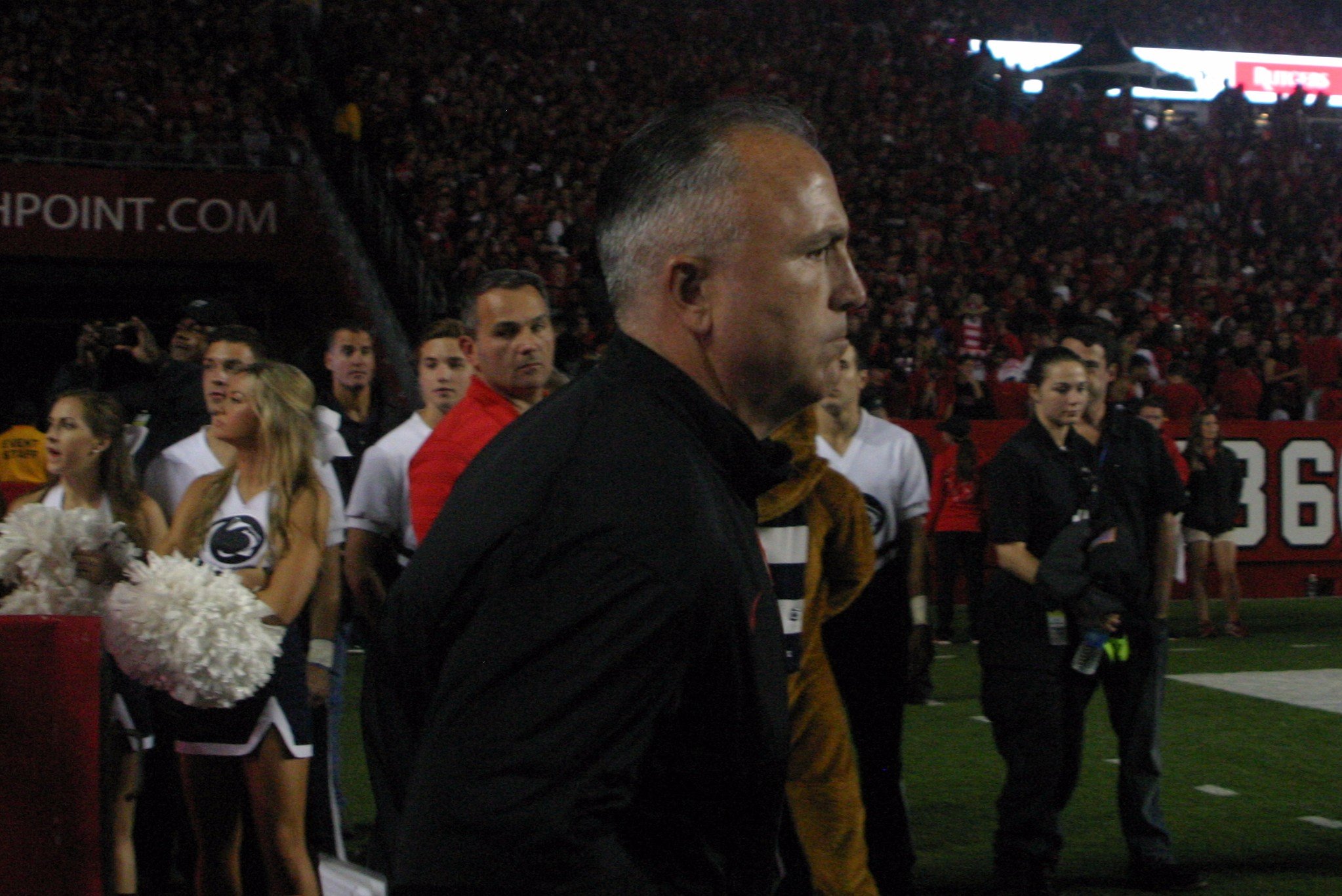 Repeated inquiries were made by NBToday about whether Coach Flood followed in Schiano's footsteps by serving on the board.  But, none of the inquiries, made to the university's football program, Caputo, and the MCPO were returned.

The crime stoppers website does not include a list of the group's board members, but New Brunswick Today has obtained the organization's founding documents.

As NJ.com's Charles Curtis pointed out that at least four of the recently-arrested athletes–Peele, Gross, Barnwell, and Delon Stephenson–were majoring in "criminal justice" until their arrests.

Curtis' article quoted an excerpt from the program's website:

Students pursuing undergraduate degrees at Rutgers University can benefit from the expertise and opportunities for hands-on research and learning afforded to them through the Rutgers School of Criminal Justice. Students are prepared for further study in graduate or professional schools, or for careers in criminal justice.

Courses in the program deal with crime and other forms of deviance and the responses to these problems by police, courts, corrections and other organizations; contemporary criminal justice issues; and ethical concerns and research.

All of the team members arrested in September were initially suspended after the arrests, and all but Carroo were dismissed. 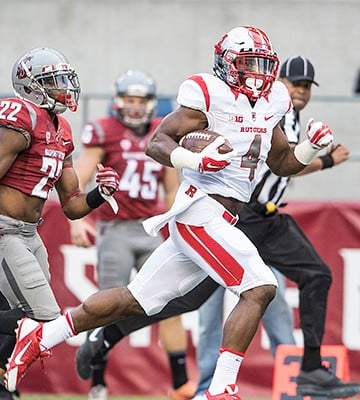 Before his supension, Carroo was the team's star player.

As a wide receiver, if he were not suspended, he would have been trained to be "violent" on the field based on a game plan titled "WR [wide receiver] In's and Out's" that was left on display prior to a postgame press conference.

The first word under "in's" was "Violently," and a subsequent bullet point encouraged receivers to engage in "violent and tight run blocking at the LOS [line of scrimmage]."

The allegations against Carroo are particularly damaging because his alleged victim worked for the school until the assault, when she quit, calling the hostess job an "unnecessary risk."

Carroo's arrest also comess less than a year after Rutgers football alum Ray Rice made national negative headlines when video surfaced of him punching his then-fiance in a casino elevator.

The Rice case shined a spotlight on some of the National Football League's substandard practices about dealing with domestic violence, raised questions about the violent nature of the game and the impact it has on families, and caused the league to make a series of high-profile public relations errors.

As we reported in 2014, the Rutgers football team also garnered negative publicity when newly-recruited transfer quarterback Philip Nelson violently assaulted someone in Minnesota, causing them brain damage.  Nelson was dismissed from the team.

But it's not just Rutgers football players who have gotten in trouble with the law.