UPDATE (3:15PM): The NBHA website appears to be back to normal for the first time in five days.

NEW BRUNSWICK, NJ—The website for the city’s housing authority has been offline for at least four days.

At times, the site was replaced with a version from more than a decade ago, including inaccurate phone numbers, addresses, and an outdated list of board members.

“The website has been down for three days and is currently being worked on,” New Brunswick Housing Authority (NBHA) Executive Director Clarke said on August 25.

“We do not know why the site went down, but our first effort is to bring the site back up and running in its entirely as quickly as possible and we will then work with the web master and host to determine if the site was hacked or tampered with in some way.”

The agency operates and manages a handful of public housing complexes in the city, but also plays a key role in real estate and construction, doubling as the city’s “redevelopment agency.”

After at least three days with no website at all, an eleven-year-old version of the NBHA site replaced what had been unexpectedly taken down.

On Sunday, August 22, New Brunswick Today first noticed that NewBrunswickHousing.org, the agency’s websitee, was not working at all, and asked officials about it.

“The Housing Authority’s website is currently down and we are working on getting it back up and running,” Clarke responded on Tuesday August 25.  “We hope to have it back up and available today.” 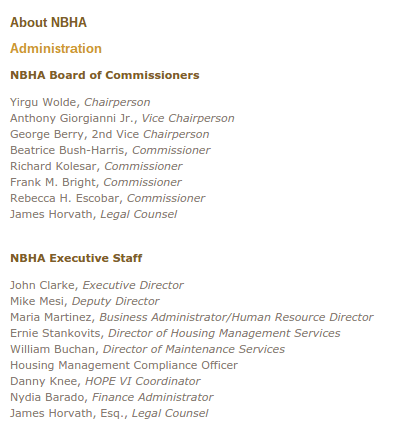 But the site did not come back online until August 26, and when it did, it appeared to have been put through a time machine.

The “blast from the past” version of the website lists the schedule of NBHA board meeting dates for 2004, and few of the board members listed are actually still on the board.

On August 27, the front page of the old NBHA website was changed to read “Under Construction.”

New Brunswick Today also inquired about a law passed in 2011 that requires housing authorities with websites to provide several years worth of budgets, meeting minutes, and other public documents.

“I do not agree that [the NBHA website] out of compliance,” argued Jennifer Bradshaw, a spokesperson for Mayor James Cahill.

“The site was in compliance with P.L.2011, c.167 before it went down on Sunday. It will be in compliance again when we restore it. The restore time is not known at this time, but they are actively working on it.”

The NJ Department of Community Affairs did not respond to multiple inquiries about who was responsible for enforcing the law.