NEW BRUNSWICK, NJ–The few weeks that have passed since Dr. Paul James Lioy died suddenly on Wednesday, July 8, have done little to pacify the loss felt by the Rutgers community, his family, friends and his colleagues.

Dr. Lioy, 68, taught at Rutgers University and pioneered the study of the health effects of the dust left by the September 11, 2001 terrorist attacks on the World Trade Center.

“Dr. Lioy cared and mentored his graduate students tirelessly and he was very loyal and dedicated to his staff. His loss leaves behind a huge void, both academically and administratively, for Rutgers University and environmental research across the globe,” Wilson Rodriguez told New Brunswick Today.

Rodriguez, who worked alongside Dr. Lioy for the last 17 years at the Environmental and Occupational Health Science Institute in Piscataway, said he will miss the morning conversations he shared with his co-worker over a cup of coffee at Woody’s Cafeteria.

The cause of death of Dr. Lioy, who collapsed at Newark Liberty International Airport, has not been determined according to published reports.

“I miss the enthusiasm Paul had for the work,” said Dr. Brian Buckley, a friend and collegue for the past 24 years who said he will miss talking about the Yankees with his good friend. “The part that made Paul a great scientist spilled over to his personal side. He attacked life and never did anything halfway. There was nothing lackasdasical about Paul, and that was definitely one of the reasons he was so succesful.”

His notoriety mainly stemmed from his authority on exposure science, which focuses on pollutants, toxins, environmental science and
occupational health. 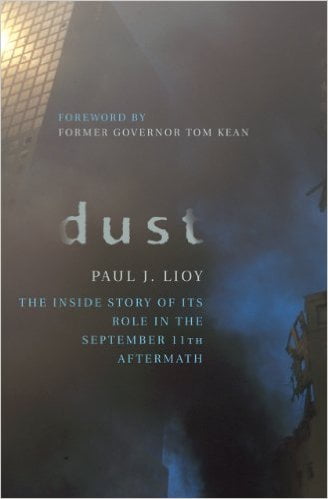 In 2010, he published his critically acclaimed book, “Dust: The Inside Story of Its Role in the September 11th Aftermath.”

Living in Cranford at the time of the attacks, Lioy saw as smoke rose from New York City and imagined the tons of dust that would fall onto Lower Manhattan.

He was among the first scientists to take samples at Ground Zero after the attacks, scooping it into Teflon bags from nearby cars and telling The New York Times in 2005: “It had a weird texture and color to it.”

Numerous studies have been published since the attacks linking the toxic plumes left after the collapse to serious respiratory conditions. Although the U.S government was initially concerned with asbestos, Dr. Lioy said once the “’World Trade Center cough’ started appearing, we realized it wasn’t caused by asbestos.”

“First, cement dust was very alkaline – the pH was above 10. That irritated the linings of the lungs. Second, glass fibers got stuck in people’s upper airways, like wooden logs in a narrow stream. That trapped the cement particles and enhanced the irritation. And there were very coarse particles that comprised the vast quantity of the dust mass,” he said during an interview on the Rutgers website.

In 2013, the Center for Disease Control determined that more than 1,100 people who worked or lived near the World Trade Center on 9/11 had been diagnosed with cancer.

“We understand the respiratory effects of the disaster, but cancer is still a big unknown,” Lioy told the Rutgers website.

Dr. Lioy was born on May 27, 1947, in Passaic, NJ.  He earned a B.A. from Montclair State College in physics and education, an M.S. from Auburn University in Alabama in physics and applied mathematics and a doctoral degree from Rutgers University in environmental science.

Since his passing, PaulLioy.com was created to allow friends and family members to share a memory they had with him.

Lioy was the recipient of numerous national and international awards including the International Society of Exposure Science Jerome Weslowski Award for Lifetime Achievement and the Ellen Hardin Walworth Medal for Patriotism.

Lioy is survived by his wife of 44 years, Jean, his son Jason, his mother, Jean, and sister, Mary Jean. A message of his passing on the Rutgers website says he “considered his role of ‘Poppi’ to his two grandsons, Alexander and Samuel, the most treasured role in his life.”

A wake for Dr. Lioy was held last Sunday in Cranford,  and he was buried July 13, at Saint Gertrudes Cemetery in Colonia.  His wife has requested that any donations be made directly to the Wounded Warriors Project.

Friends of Dr. Lioy or those interested in sharing condolences can visit PaulLioy.com to sign the guest book and leave a message.