NEW BRUNSWICK, NJ—In the first year of the Rutgers University’s “honors college” program, as many as 90 incoming freshmen might not be able to live in the actual Rutgers Honors College building, according to several sources.

The new five-story building, which is slated for completion this summer and will house some 540 students, will not be large enough to accomodate the number of students who confirmed their attendance.

Instead, the remainder of the Class of 2019 honors students will be housed at nearby Frelinghuysen Hall, a significantly older building.

Paul Gilmore, an Administrative Dean at Rutgers, did not respond to requests for comment from NBToday, but he did speak to students directly on an unofficial Facebook group for the Honors College Class of 2019.

He informed the incoming first-year students that “some students will get into the residence hall, but not all.”

“We will require students to live either in Frelinghuysen or the Honors College building, as we see the additional housing as simply an extension of the living/learning experience grounded in the Honors College facility,” Gilmore added.

Gilmore assured the students placed in Frelinghuysen that they would have “access to all of the programming, resources and courses we will provide,” and that students would have access to the main building via their student ID card.

Once one student began posting their emails about their housing dilemma on the Rutgers Honors College Class of 2019 page, other Honors Class of 2019 students began sharing similar experiences.

“I just can’t help but feel like I’m getting screwed simply by the fact that they told me this AFTER I paid my enrollment deposit,” a student wrote on the page.

“I mean for many people, this could be a dealbreaker,” they continued.  “The new building is basically the whole point of the honors college.”

“Bottom line is, [Honors College] students should be entitled to [Honors College] housing,” another student wrote. “More precautions should have been taken to prevent something like this from happening.”

Gilmore took to the Rutgers Honors College Class of 2019 Facebook page in March, stressing that any mentioning of the Honors College building being overbooked were nothing more than rumors.

“The facility is NOT overenrolled, and we don’t expect it to overfill,” Gilmore wrote at the time, adding that the “best information” would come by emailing the Honors College directly. 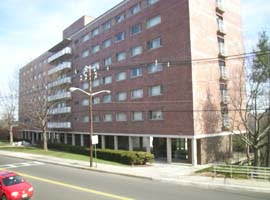 But Gilmore later wrote directly to students that as many as 25 to 40 students were on the waiting list for the Honors College building, and would instead have to live in Frelinghuysen Hall, a dormitory/classroom building that first opened in 1956, if nothing opened up before the fall semester.

Another letter from Gilmore stated that students who confirmed their attendence before April 29 “would be housed in the facility.”  However, “a small number of students will be placed in alternate housing in nearby Frelinghuysen Hall.”

Rutgers officials, including Gilmore, have not responded to multiple inquiries about the housing situation from New Brunswick Today.

It is not the first time Rutgers has overbooked its own limited housing options.

In 2009, the Crowne Plaza hotel in Franklin Township was turned into a satellite campus where hundreds of students stayed for the school year, despite its location more than four miles away from the main campus.

In the beginning of the 2013 school year, 115 students were put up in temporary housing, including dormitory lounges and older buildings that had been taken out of service.

The Honors College building, which is built at the former site of the New Brunswick Theological Seminary, is just one of several projects that are a part of the state-sponsored redevelopment initiative.

Construction for the Honors College began in the summer of 2014.

A new building for the seminary was erected on the other end of the block, adjacent to the historic Gardner E. Sage Library, one of only two buildings remaining on the block.

Meanwhile, a 15-story, privatized student apartment building is also under construction at the former site of the famous Grease Trucks, in addition to a new academic hall next to the Honors College and a new Hillel building on College Avenue.

The new highrise apartment building will house between 400 and 500 students, but it isn’t scheduled to open until the fall of 2016.