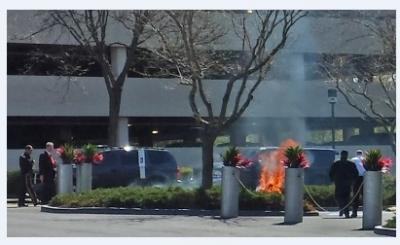 After frequent protests at previous shareholder meetings, the consumer products giant has quietly moved the big meeting, coming up on April 23 at 10 a.m., from its usual location, the Hyatt Regency Hotel, and has significantly shortened the meeting to one hour.

Previous meetings included a free lunch and gift bag for all in attendance, but that won't be the case this year.

“We are pleased to be hosting the 2015 Annual Meeting at The State Theatre of New Jersey. Johnson & Johnson is a long-time supporter of this wonderful space, and it has hosted our Annual Shareholders Meeting in the past,” said a J&J spokeswoman.

J&J said they've adjusted the format of the upcoming meeting “to better align with current industry practices.” It will be webcast live, and also available for replay following the meeting.

But the running time of the meeting is scheduled for only one-hour, while 2014's ran for at least an hour and one-half. According to J&J it will include the formal completion of items of business for the year, a brief update from Chairman/CEO Alex Gorsky, and an open question and answer session.

“The agenda for the meeting remains essentially unchanged, but the business highlights presentation has been streamlined,” J&J told NB Today.

“We conducted a benchmarking study of our peer companies to understand best practices for these meetings and have adjusted our program to align with those standards.”

A group of five individuals who were injured by one of J&J's products flew to NJ at their own cost and visited the Hub City to protest the mesh implants and request an internal investigation over the shredding of papers, at last year’s annual shareholders meeting.

The group held a news conference on the public sidewalk where many shareholders saw the demonstration.

Last year, police constructed a fire and set off an explosion after the meeting was over.

“It was exploded after everything was over, like they didn't need it anymore,” said journalist Jane Akre, who gathered the group for the trip to New Brunswick. She added that she thought setting up the explosion was “overreaction.”

“You have to believe they were surprised by our visit last year,” Akre told NB Today.

“They brought in the state troopers and angry German Shepherds and even had an explosion designed to designate as a diversion if necessary.”

J&J will report financial ratios in today's First Quarter Earnings Call, which will also be available as a Webcast. Its shares fell 1.5 percent to $100.55 yesterday.

“Investors and other interested parties may access the live audio webcast of the [annual shareholders] meeting by visiting the Company's website at www.jnj.com and clicking on the webcast icon,” reads a release.