NEW BRUNSWICK, NJ—President Robert Barchi touched on many hot-button issues in his remarks to the Rutgers University Student Assembly (RUSA) on March 26.

Barchi began with an overview of the physical master plan that was presented at the the last Board of Governors meeting, focusing mainly on transportation and the new construction planned for the College Avenue campus.

What Barchi revealed, that was not discussed at the Board of Governors meeting, was that the University intends to organize the process of housing students.

He explained that students are assigned their courses and their campuses of residence separately, creating a lot of unnecessary bus ridership as students leave to take their courses on a different campus.

“What if we did it all together? We assign freshman to a campus based on what they’re interested in,” said Barchi. “We could reduce peak ridership on the buses by 35%.”

“By next September, incoming freshman will be distributed differently, the courses and the rooms will be assigned in a more synchronized way, and we should immediately see a change in the ridership at peak times in transportation.”

Barchi also focused on the new construction proposed for the College Avenue campus, focusing on making it safer for students.

He explained the plans to turn College Avenue into a pedestrian-only road and to make George Street the main route for buses, something his predecessor had attempted to do but fell short of.

Barchi also clarified that the new buildings that will be built in place of Brower Commons and Records Hall will have a parking garage underneath, stretching the full span of the grassy lawn.

During the question period, students asked about the rising cost of tuition, state appropriations to the university, subsidies to the athletics programs, the university’s handling of recent sexual assault cases, the future of Greek Life, and more.

The first to speak, RUSA representative Allie Williams, asked Barchi, “Can you share what you think next year’s tuition costs will be?”

He informed the crowd that the budget will be discussed by the Board of Governors on April 23 in the College Avenue Student Center.

Barchi continued to say “I’m actually pretty proud that of all the AAU publics, we’re the third lowest from the bottom [in terms of tuition increases]… despite that our dollars from Trenton are going down.”

“I go to Trenton a certain number of days,” said Barchi. “I just got back from a trip to Washington where I met with Senator Menendez, Cory Booker, and a number of our congresspersons. I go down and testify. A lot of times I’m just out to lunch with somebody.”

Barchi discussed at length how often he lobbies, but did little to address how successful he or other Rutgers University representatives are.

Barchi suggested that students and faculty get involved.

“If you have a home district, and you do, make an appointment to go see your congressman or assemblywoman. It goes a long way. I hear about it the next time I see that person.” 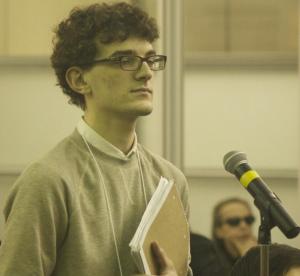 Patrick Gibson, a RUSA representative, tried to address Barchi’s incomplete answer, and asked, “could you talk more about what you and the administration are doing to specifically fight for increased state appropriation in order to defray tuition costs?”

Barchi went on to explain how difficult it is to acquire funding. “What we’re faced with in New Jersey is a budget where there just isn’t any money.”

According to the United States Student Association, these cuts would amount to roughly $150 billion, leaving an many students with severely decreased aid.

Matt Shuckertt, a representative from the Students for Shared Governance, brought this up, and asked “Would you take a stance against the proposed cuts to pell grants and Stafford loans, perhaps when you’re talking to Senator Menendez or Christie?”

“I absolutely have, and will, and have,” said Barchi. “And I can tell you that our new Senator from Newark [Cory Booker] is firmly in your corner.”

Another representative from the Students for Shared Governance, Mar Nikiforova, followed up and asked, “Regarding the cuts to Pell grants and Stafford loans, would you like to compensate for those cuts by granting a tuition freeze?”

Barchi replied, “To offset any loss to our students that the government put in place is not as simple as reducing the tuition.” He explained that a tuition freeze provides a cut for all students, even those who are well off enough to “afford to pay twice as much.”

Barchi suggested it would be more effective to fund scholarships for those students who are eligible for Pell grants, but did not pledge to actually do so.

A representative from EOPSA, the EOF Governing Body, asked “What is the University doing to fight against the decrease in EOF funding?”

“What we’re doing is the best we can do, going out and lobbying for funding.  We’ve been raising private money for it. We just got a $300,000 donation to support our Rutgers Future Scholars program,” said Barchi. “We’re trying as best we can.”

In relation to tuition and financial aid, many students were curious about the role students play in decision-making on campus, or “shared governance” as the concept has been termed.

President Barchi often touts the importance of shared governance between students and the administration, but has never made any effort to help students acquire voting representation on major decision-making bodies, such as the Board of Governors.

RUSA Representative Connie Capone asked Barchi, “Can you give a few examples of ways you’ve increased shared governance between students and faculty?”

These forums occur once a month, and provide a space for students to go and speak with the Chancellor. However, they do not expand the governing power of students in any way.

Barchi expressed confusion as to why so few students attend them.

Brianna Battle, a RUSA representative, asked a more direct question regarding shared governance: “With our enrollment increasing every year, would you expand the amount of students in the Senate?” 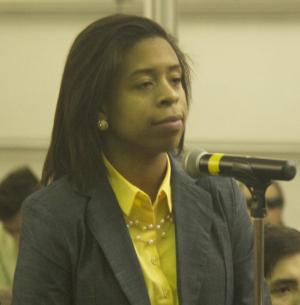 “I think that you as a Senate just went through a process of redesigning the numbers because new members came in through UMDNJ,” Barchi replied. “The Senate can have as many people as it wants… If there is a certain ratio of students to senators that should be met, it’s a university senate decision.”

Many students have also been concerned with the multi-million dollar subsidies that have been coming from student fees to support the school’s athletics programs.

“In 2014, the athletic subsidy took $360 from student fees, and also the Athletics program has brought in a continuous deficit for a long time,” said Sivan Rosenthal, a representative from the Students for Shared Governance.

“So I just wanted to know how the University justifies the usage of students’ money in this manner, and how do these subsidies benefit the students, particularly those who are not interested in sports?”

“We have an athletics fee, so do 80% of other AAU universities,” replied Barchi. “What does the athletics fee pay for? The fact of the matter is: not one dime of the athletics fee goes towards basketball here. They’re supporting everything else… swimming, gymnastics, volleyball, soccer, or baseball, the olympic sports.”

“The thing I take umbrage over is that we’re running a deficit into the unforeseen future,” said Barchi. “We know exactly how many years its going to take to break even. We have a business plan, we know what that business plan is, and we’ve shown everyone that business plan.”

Bringing attention to the issue of how the University has recently handled cases of sexual assault, Mihir Rastogi invited Barchi to participate in a march against gender violence and harassment.

“On April 22nd, we are having a march called Take Back the Night… will you President Barchi, in light of recent criticisms against the University on how sexual assault cases were handled, show solidarity and support with us?” 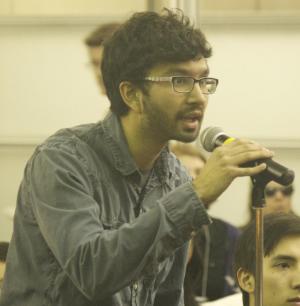 “Well, I will certainly show solidarity and support with you, whether I can attend or not I don’t know,” said Barchi, defending against recent criticism towards the university.

“When Sarah McMahon runs a survey here, the White House asks her, how are you doing it?” said Barchi. “I would definitely speak out in favor of what you’re doing. I just encourage you not to be negative about disagreements, that if something shows up in the Targum, not everybody sees all the factors.”

Amy Clark, a RUSA representative, addressed the university’s rules on sexual assault, which were recently the topic of a front-page story in the school’s student newspaper, The Daily Targum.

“In the Targum, a student… said that she was very upset with the way her rape case was handled because her rapist received a suspension rather than an expulsion. And one of the problems is that consent is very weakly defined in the code of conduct, so are there any efforts to make that more concrete?” asked Clark.

“If I understand this correctly when the official action was taken,” replied Barchi, “the student was suspended for enough semesters, so that woman would be graduated from college for at least a semester before he was allowed to come back in.”

Barchi continued to express that he understands the severity of these issues, but did not verify whether or not he would insist on a change to the code of conduct.

Justin Schulberg, a RUSA representative and VP of the Inter Fraternity Council, asked Barchi about the future of fraternities and sororities on campus.

“Given all that’s been happening recently in the media and at Rutgers with Greek Life, what do you see as being the future of Greek Life at Rutgers, and what’s your role in achieving that future?”

“Well, I think the major answer to that question comes from you,” Barchi replied. “When I was Provost at Penn, all the Greeks reported to me and unfortunately, I had to throw more than a few of them off campus.”

In response to a question about diversity in his senior staff, Barchi said he was happy with the group he has, adding that it’s no longer just “old white guys.”

“I’m still here, but we’re working on that too,” he joked.